The Canterbury Bulldogs are copping flak for sitting in the NRL’s top four when they don’t “deserve” to be … Why is that?

Let’s analyse the argument that Canterbury isn’t a top-four side by first looking at their biggest scalps for 2016. They knocked over current competition leaders the Melbourne Storm – in Melbourne – earlier in the season, they’ve beaten last year’s grand finalists Brisbane and, apart from a few minnows and play-offs aspirants, they’ve also defeated fellow top-eight sides Penrith and the Gold Coast. They’ve won eight games on the road, they’re the fifth-best defensive side (points conceded) and sit third-last in missed tackles.

They have a hard-working forward pack: James Graham leads the league in runs and metres run, while Aiden Tolman sits second for times carted the ball up. Graham also leads the NRL in hit-ups … by 40.

Is it their style of football they’re being written-off for? Are they just not playing attractive enough for people to be taking them seriously? This wouldn’t be worrying the players or their coach Des Hasler, who know just as well as most people that a win is a win and they’re all worth two points. While we’re still in Olympic mode, with the Closing Ceremony just hours completed, perhaps we should propose an alternate ladder where teams are awarded competition points based on how they look and perform.

Until that system comes along, you’re stuck with the current version, which is awarding teams points for wins and, like them or not, the Dogs have enough – always seem to – at the right end of the year to be sitting pretty in fourth.

A few seasons ago, in 2014 when they were having an outstanding year, it was Penrith being put under the microscope for apparently having a draw which was too “easy”. Not sure what that was supposed to mean – maybe the NRL accidentally had them playing a few NSW Cup teams in there somewhere, but I don’t recall that happening.

Perhaps an explanation for all this Bulldog-dissing is the positioning of North Queensland and Brisbane on the ladder. It seems to be freaking a lot of footy fans out. The Cows and Broncs are both on 30 points behind the Bulldogs. Haven’t taken them over yet, and probably don’t deserve a top-four spot unless they do … 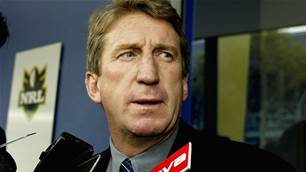