As revealed in the last two articles on Inside Sport, Kyushu has plenty to enjoy between the rugby matches its hosting during the 2019 Rugby World Cup.

We’ve looked at when and where a few important games worth catching (including the Wallabies’ Pool D hit-out against Uruguay and two quarterfinals) will play out.

And we’ve looked and drooled while imagining the tastes on offer when visiting this fertile and seagirt land.

But we’ve saved the best for last with an in-depth look at the spectacular natural treasures which are a drawcard in their own right and also a crucial part of producing the culinary delights which help make Kyushu famous among the Japanese.

A gloriously rich, volcanic land holds as much for the tourist as it does for those working the soil and sea – and it won’t be long before this island’s secrets are far more widely shared. A quick Google image search for “Kyushu nature” will reveal a heap of pictures of the walls and waters of Takachiho Gorge from all angles.

The Gokase River cuts a narrow chasm through volcanic basalt chasms – creating an effect like the scales of an ancient dragon – leading up to the focal point 17-metre high Manainotaki Waterfall.

Locals love to row up the river with its calm waters which don’t appear to move much faster than the rock formations towering above. But you can also just walk along the track winding its way alongside the river. Both offers ample opportunity to take it all in and get a few photos without too much interference from the others.

Despite its hue natural beauty and popularity, it manages never to feel too touristy, with a perfect balance of green, pristine nature and comfortable facilities. A kilometre or so further down the trail, you’ll reach the Takachiho Shrine, a gorgeous traditional building designed to blend in with the tall cedars which surround it. At night, the hall next to the shrine hosts re-enactments of the Takachiho Yokagura, an important Shinto cultural experience featuring masked dancers and traditional Japanese instruments. Aoshima is a tiny island and yet manages to hold its place as one of Kyushu’s most iconic sites of nature and culture (and not to be confused with another Aoshima in Shikoku which is famous for its cat population!)

Surrounded by a beautiful white sandy beach, the Kyushu island is joined to the mainland by a single bridge. Within the 1.5km white ring created by the beach is a stunning and cool subtropical forest which, in turn, envelops a magnificently coloured shrine. The shrine is said to bring good luck to those looking for love every year and attracts hordes of young Japanese people in the hope that the Aoshima Shrine might help them find their soul mate. With any luck you’ve already found your own but Aoshima is still worth your time. Depending on the tide, a phenomenon known as Oni no Sentakuita, or devil’s washboard can be found either just below the surface or protruding just above. The perfect lines of these peculiar basalt formations look manmade but are all the handiwork of mother nature. 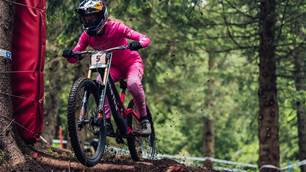 Les Gets World Cup wrap up