The game of rugby league had never seen anything like Wally Lewis’ lethal passing game.

The game of rugby league had never seen anything like Wally Lewis’ lethal passing game. 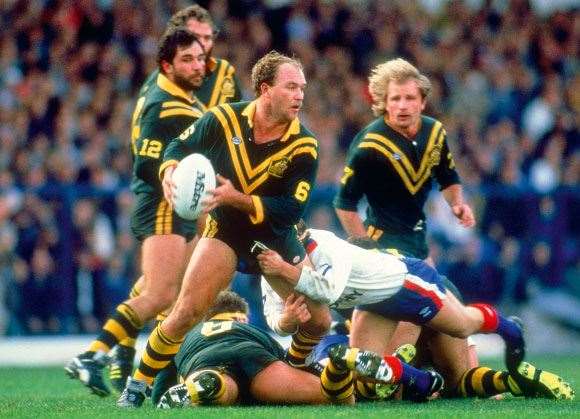 There was nowhere to hide from Lewis’ clever passing on the international scene,
Image: getty Images

Love him or hate him, believe the hype about him being the greatest of all time or not, there’s no denying that Walter James Lewis had a profound and permanent impact on rugby league.His record is undeniable. It’s hard to believe he only played 90-odd games at the top domestic level. “The King” represented Queensland in State of Origin 31 times. For 30 of those, he was Queensland captain. He almost single-handedly established the dominance of the Maroons during that period, winning eight man-of-the-match awards. The highlights of his Origin career are far too numerous to mention here, but many of them were the very definition of rugby league heroism. He played 33 internationals and captained the Australian team from 1984 to 1989.

All this makes him a legend.

His pin-point kicking, savage tackling and hard running also made him a pioneering five-eighth. Previously, the pivot had been a facilitator; a playmaker. Lewis was all these things, but when a powerful physical presence was needed, he provided it in ways we’d never witnessed before.Lewis fired his first warnings to the NSW- centric league world during the second one-off Origin game in ‘81, when his passing helped turn a 15-0 deficit for NSW into a 22-15 win for Queensland. Like most things in his career, it was a defining moment.

In the deciding game of the first-ever full-blown Origin series in 1982, Lewis unveiled a compelling long-passing game the likes of which we, and his stunned adversaries, had never seen before. His cockroach opponents watched with awestruck helplessness and looked at each other with haunted resignation. Their feeling of utter powerlessness was deepened by the knowledge that these projectiles were impelled by one of the smartest football brains going around. They were in for another decade of it.

His opponents, and the game, stood still. We were still coming to terms with the manoeuvre at home when Lewis produced it again that year against Britain. Australia, ahead 17-6 in the Wigan Test, were nowhere near a sure thing when Lewis, who’d come off the bench, acquired the ball just in front of the Lions’ 25. The teak-tough Brits moved up to greet him in their traditional manner, when Lewis spotted a fellow Queenslander 25m away. His pass blasted out, spinning as though it had been fired from a gun barrel, and crashed onto Mal Meninga’s broad chest. Of course, Meninga did what he did best and bullocked over for a try before the Lions’ defence even had a chance to be frightened by him. It was unforgettable; a lightning strike. The world’s first smart bomb had crashed into the middle of an unsuspecting sport. 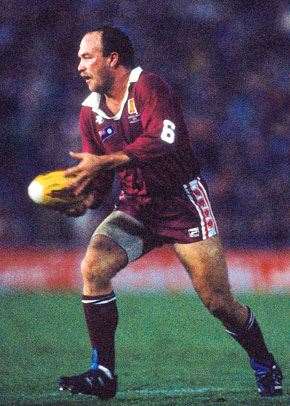 Lewis had introduced a new skill, rather than an idiosyncratic piece of brilliance, and league would be changed forever as a result of his deployment of this devastating weapon. One only need watch old replays of the passing competition on Rex Mossop’s World Of Sport to see the way passing was transformed by Lewis. Rugby union was the province of great passing skills, but even there it had been confined to some of the very best halves like Carson, Hawthorne, Hipwell and Catchpole. League boasted many skilful short passers, like Billy Smith and Steve Mortimer, but the only way a ball ever travelled long at all was off a boot.

Lewis had played rep union as a schoolboy before returning to his first love, league, and saw no reason why the skills he learned there shouldn’t be transferable. Another convert from union, Ricky Stuart, followed in Lewis’ wake, and since then men like Andrew Johns and Darren Lockyer have proved excellent exponents.Lewis had made his indelible stamp on the game before he ever played in his own country’s premier competition, despite many attempts by Sydney clubs to lure him south. When the Brisbane Broncos were formed in 1988, he was their inaugural captain. Two years later, he joined the Gold Coast Seagulls, and retired in 1992. He will always be remembered for his ability to control a game of football, but that passing game opened a world of possibility for the sport.

At the entrance to Brisbane’s Lang Park, where it all began for Wally, a statue stands in his honour, inscribed “Wally Lewis, The Emperor of Lang Park.” In 1999, he became one of only a handful of players to be named an Immortal of the game.

Morri: The futile search for consistency