Following in the footsteps of LeBron, Bryant and Jordan. 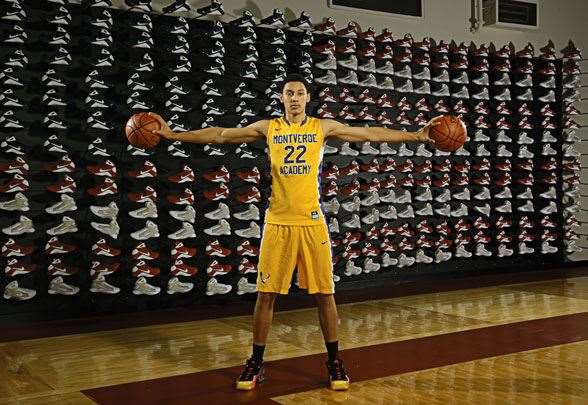 This month Ben Simmons will take the floor in the McDonald’s All-American Game in Chicago, the annual showcase for the top high school basketball players in the United States. Thing is, though ... Simmons is not wholly American. The top-rated baller in the class of 2015 hails from Melbourne, and he becomes the first Australian to be named a McDonald’s All-American, earning a status shared by the likes of previous hoops hotshots such as LeBron James, Kobe Bryant and Michael Jordan.

Like Utah Jazz rookie and good mate Dante Exum, Simmons is the son of an American import who came to Australia to play in the NBL. Dave Simmons was a rugged forward from Harlem who played 13 seasons in the league, best remembered as a key part of the Andrew Gaze-Lanard Copeland Melbourne Tigers’ team that won a long-awaited title in 1993.

Three years later, Dave and his Australian wife Julie had baby boy Ben, who spent some of his early years in Newcastle where his dad played and coached later in his career. The family then moved back to Melbourne, where Simmons quickly established himself as perhaps the most exciting junior talent Australian basketball had ever seen. At 15, he was starting for the national team at the 2012 world under-17s in Lithuania, a side that claimed the silver medal.

Simmons tracked along the established path to the AIS. But unlike Exum, who was something of a poster boy for the Institute, the environment wasn’t to Simmons’ liking. He instead headed for high school in the US, settling at Montverde Academy outside of Orlando, Florida. Montverde is known as one of the best basketball schools in the States, more like a university program in how it draws players from across the country and beyond. Having dominated the often overmatched competition in Australia, Simmons proved just as capable against the elite of his age group, rising to No.1 in ESPN’s ranking of the top high school players. In addition to the McDonald’s game, he’ll be a leading figure on the world team for another showcase this month, the Nike Hoop Summit in Portland.

Long bracketed with Exum in terms of NBA-level potential, Simmons won’t immediately be able to follow him to the professional riches of the league. Because he’s graduating from an American high school, Simmons will have to wait at least a year before declaring for the NBA Draft. He’s headed to Louisiana State University, where he arrives as the school’s best prospect since Shaquille O’Neal was the literal big man on campus there in the early 1990s.

Many basketball phenoms are proverbial men-among-boys in their combination of size and athleticism. The 206cm-tall Simmons certainly has those qualities, but what sets him apart is a refined skill set and degree of finesse that are rarely seen at his age. Left-handed, crafty and blessed with a great feel for the game, Simmons has a dash of San Antonio star Manu Ginobili, according to Australian Boomers coach Andrej Lemanis. “He would throw a pass to a team-mate that wasn’t there,” Lemanis says, recalling the teen’s play at national team camp. “Then his team-mate would turn around and apologise because he realised that’s the spot where he should have been.”

ESPN’s international basketball guru, Fran Fraschilla, likened Simmons to Milwaukee Bucks rookie Jabari Parker, predicting he could become a similarly multi-faceted offensive threat at the NBA level. Another apt comparison is former LA Laker star Lamar Odom, a fluid, lefty big man who could play all over the floor (hopefully, though, Simmons will avoid ending up with a Kardashian).

After Simmons was one of the last to miss out on the Boomers' side for the World Championships last September, Lemanis was asked what the kid needed to do next. Lemanis’ reply: “Just get older.” Australian basketball can hardly wait – not only is Simmons on his way, there’s a pair of Aussie seven-footers right behind in Sudanese refugee Thon Maker (pictured above, with Simmons) and recent under-17s star Isaac Humphries, both American-based prospects who will draw similar attention.

“There’s no doubt he’s going to be a great player ... He has matured a little bit, he’s added a few more things to his game. He’s got an exciting future, and we hope he’s going to be a part of the Boomers’ program for a long time.”

“I love his temperament on the court, his passing and unselfishness. If anything, he’s too unselfish, on his team right now; he can be more aggressive as a scorer.”