Check out how Australia warmed up for the Ashes.

Australia completed a comprehensive 2-0 series win over the West Indies in the Caribbean, retaining the Frank Worrell Trophy in the process.

The Australians never looked like losing, being in full control throughout the two Test series. The first Test saw Adam Voges become the oldest player to make a century on debut in a Test match when he hit 130 at the ripe old age of 35. Australia went on to win the match by nine wickets.

The second Test went much the same way, as Steve Smith amassed his highest score in Test cricket, eventually falling one run short of a double century. Australia pushed on to win the second Test by 277 runs.

The story of the series, however, was the selection headache the Aussie selectors will have heading into the first Ashes Test in Cardiff next month. With the returning Ryan Harris all but a certainty to make the final squad, this leaves Mitchell Johnson, Mitchell Starc and man of the series against the West Indies Josh Hazelwood to battle it out for the final two fast bowler spots; all three staked their claim for selection with impressive performances in the Caribbean, taking a combined total of 30 of the 40 West Indie wickets over the two-match series.

In other news resulting from the tour, Nathan Lyon became Australia's most prolific off-spinner. He took three wickets in Jamaica, taking his tally to 144 wickets from 41 Tests. He is now equal-fifth on the all-time wickets list for Australian slow bowlers, alongside the legendary Bill O’Reilly. Only the great leg-spin bowlers Stuart MacGill, Clarrie Grimmett, Shane Warne and the late Richie Benaud sit above him. However, at the age of only 27, expect Lyon to climb higher in the rankings as his Test careers flourishes.

We've compiled a gallery of the best images from Australia's tour of the West Indies. Enjoy! 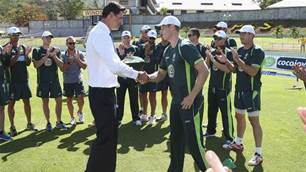 Jets finally get their marquee touch