Two Sydney Sixers victories in three days move them to the top of the standings.

Tom Curran provided a season’s worth of excitement against the Scorchers and the Thunder with two brilliant performances. Lloyd Pope has quietly gone about his business impressively. In Perth, the Scorchers were 19 overs into a good performance until Curran’s hitting took the momentum away. In the Sydney derby, the Sixers and Thunder served up a fantastic advert for BBL cricket. In the end, the Sixers prevailed by the smallest of margins in the Super Over.

On the Gold Coast on Friday, the match when down to the last ball but it was Adelaide that kept their unbeaten streak while the Stars will rue fielding mistakes. 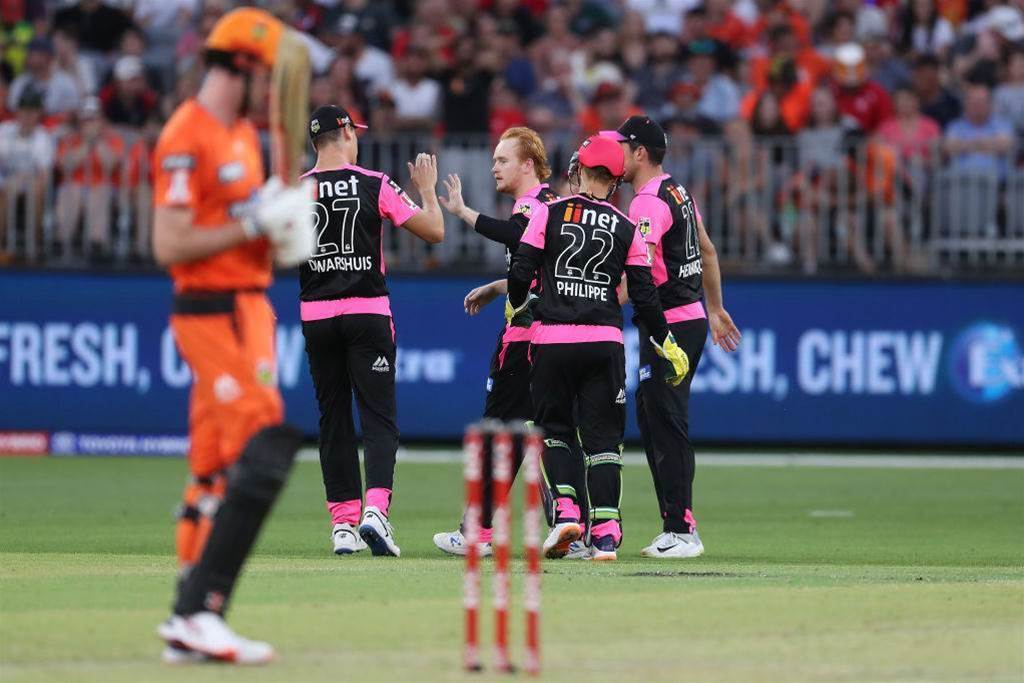 Having been inserted by the Scorchers, the Sixers were pegged back early when Chris Jordan took Josh Philippe’s edge for 9. Daniel Hughes and James Vince steadied the ship before spin accounted for both batters. First, Hughes’ aggressive intent led to a rush of blood to the head, and Ashton Agar floated one past for Josh Inglis to stump the opener for 35 from 22 balls. Eight runs later, Vince followed similarly with Fawad Ahmed being the recipient of the wicket.

Moises Henriques and Jordan Silk both settled quickly before falling in quick succession. Henriques was striking the ball well, already had a six and four fours under his belt but dragged a Jhye Richardson wide ball onto his stumps. A promising innings of 35 was over and three balls later, it was Jordan Silk heading back. Silk’s innings was nowhere near as fluid as Henriques.

Losing Hayden Kerr and Sean Abbott cheaply, it was down to Curran to get the score up. With the Sixers on 7/150 after 19 overs, it was looking like an under-par score. The Scorchers’ Matthew Kelly bowled the last over to Curran who took him apart: 2, 4, 6, 4, 2, 6.

The Scorchers, already three wickets down in the fifth over, were looking beaten. Bird picked up Cameron Green for one run before Abbott claimed the prize wicket of Scorchers’ captain Mitch Marsh for 17. At 5/34, the game was as good as over.

A mini fightback from Ashton Turner (28) and the unfortunate Kelly (23) got the Scorchers into three figures, but Pope’s excellent spell while Abbott and Ben Dwarshuis picked up wickets at regular intervals gave the Sixers a comfortable Boxing Day victory at Optus Stadium. The first real nail-biter of BBL09 was served up, unsurprisingly, by Adelaide Strikers and Melbourne Stars.  Although being held at Metricon Stadium on the Gold Coast, it was deemed a home game for the Stars who had beaten Brisbane Heat last week at the same venue.

The game set alight in the second over when Dale Steyn, making his Stars debut in place of BBL09 leading wicket-taker Haris Rauf, was pumped for 21 runs before snaring Jake Weatherald with the last ball of his over.

Both Phil Salt and Matthew Short were undone by two pieces of leg-spin magic from Adam Zampa and Sandeep Lamichhane. Firstly, Salt’s slog was woefully beaten by a drifting, skidding delivery from Zampa. Two overs later, Lamichhane’s googly left Short swatting at ball turning the other way and slid through the gate to leave the Strikers on 3/53.

The Strikers’ innings was held together by a stand of 89 between Alex Carey and Jon Wells. Carey was unusually circumspect, despite hitting two sixes, for a run-a-ball 45. Wells was more aggressive as both of the Stars’ leg-spinners proved difficult to score off. Carey’s innings was finally over when trying to accelerate but only managed to give Nic Maddinson a catch off the bowling of Dan Worrall.

Wells and Rashid Khan saw off the last 17 balls of the innings to get the Strikers to 4/174.

The Stars response stuttered early on with Maddinson holing out for a single before Cameron White took a screamer of a catch, at cover, to remove Hilton Cartwright. With Marcus Stoinis and Peter Handscomb at the crease, the Stars regained a sense of composure. Moving through the gears, the Stars looked like they were building a solid response until Stoinis tried one shot too many to Cameron Valente. The medium pacer held onto a difficult caught and bowled chance to remove the opener for 33 from 31 balls.

The fall of the third wicket brought Glenn Maxwell to the crease. And the Stars’ captain set about winning another game for his team. When Rashid Khan beat Handscomb with a beautiful googly, the score was 4/91, but Maxi looked unfazed by the proposition. Crafting another innings of brilliance, Maxwell hit four sixes and a four before disaster struck. Peter Siddle was brought back to get the breakthrough and did just that. Maxwell’s reverse slog somehow toe-ends the ball and dislodges a bail. With the main threat gone, for 43 from 25 balls, Nathan Coulter-Nile came to the crease.

Needing 34 runs from 21 balls, Coulter-Nile played some big shots to get his team close to victory. Siddle was left to bowl the final over, needing to defend 12 runs, and did so: 2,1,1,2,W,0. It was not quite enough to win the man-of-the-match award but secured the Strikers’ unbeaten start to BBL09. If the Strikers’ victory had been a nail biter, the first Sydney derby of BBL09 took it to the next level. Tom Curran conjured up a mini hero-villain-hero story in a match that kept cricket fans on the edge of their seats to the final ball of the super over.

Thunder elected to bat first with Usman Khawaja and Alex Hales getting them off to a good start before both fell quickly. Khawaja went first, Jackson Bird taking a screamer of a catch, before Hales followed for 32 from 21 balls. Matthew Gilkes then fell, to a superb Lloyd Pope delivery, to leave Thunder on 3/54 after eight overs.

Callum Ferguson, who regularly plays the anchor role for his team, and Alex Ross regained control with a 56-run partnership. In a night for momentum switching back and forth, the Sixers then took four wickets for five runs with Lloyd Pope demonstrating why he’s a massive talent with 3-23.

Ferguson was out off the last ball of the innings to nurse his team to 8/149.

The Sixers were missing James Vince through injury and shuffled their batting line up. Hayden Kerr was asked to open but the experiment failed as Jono Cook bowled him through the gate in the first over for a duck. Josh Philippe’s out of sorts innings, 11 from 17 balls, was ended by Chris Morris who trapped him in front to leave the Sixers on 2/38 in the seventh over.

Chris Green struck twice in quick succession as the game continued to seesaw. Daniel Hughes was deceived by a drifting arm ball from Green and was bowled for 37. Six balls later, Green’s superb running collect-and-throw left Jordan Silk short of his ground. The Sixers were 4/72 at the end of the tenth over.

Over the next six overs, Moises Henriques and Jack Edwards chipped away at their target before Morris picked up his second wicket. Edwards slapped a full toss at man-of-the-moment Green who accepted the catch at midwicket. When Henriques mistimed a Daniel Sams delivery to cover, the score was 6/122 with 23 balls left in the innings and another 28 runs required.

Enter Tom Curran. The English allrounder, fresh off batting heroics against the Scorchers, conspired to write another chapter. Needing 16 runs off Chris Tremain, the first ball sailed over deep midwicket for six. A dot ball and two twos added to the tension before Curran smeared the fifth ball through the covers for four.

With two required off the last ball, Curran pulled the ball towards deep square leg. A clean pick up and throw from Morris meant that Curran’s second run was short and a super over was required.

In the super over, the Sixers batted first with Henriques and, who else, Curran facing. Morris bowled the first ball to Curran who nicked off from a wild swing. Momentum back to the Thunder. Henriques had other ideas with ridiculous scoop shots to take the Sixers to 16.

Khawaja and Hales were chosen for the Thunder to bat with Curran, who must have had nerves of steel after his evening to that point, bowling. The first four balls were exquisite death bowling with just five runs scored. The fifth was smashed back over Curran’s head, off Hales’ bat, for a six to leave the Thunder opener needing to repeat the stroke to win the match.

However, Hales could only get a boundary off his fellow countryman’s last ball of the super over. Sydney Sixers won the Super Over by one run which put them on top of the standings as they stand. Scott all but out of US PGA Championship