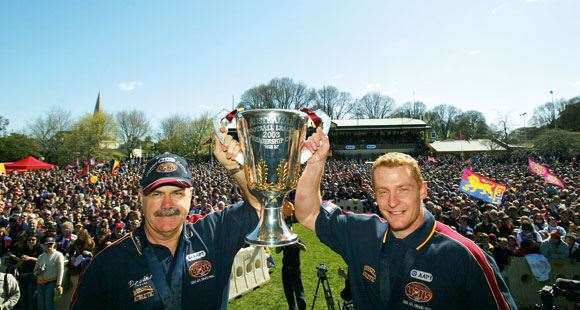 The Lions are in Voss’ hands now, after Lethal passed the mantle on last season. Images: Getty Images

Some quick email polling produced a flood of proposed questions and wardrobe suggestions. Would it be too much to wear the old Hawthorn jumper? Probably. Should I take a footy and suggest a quick kick? Probably not. See, dad and us three boys had trotted off to watch the Hawks every Saturday through Melbourne’s dire winters for years. It was our great male bonding ritual. Then we all started moving about – overseas, interstate. The Hawks fell on hard times and the interest waned. Of course, recent events have reignited the flame. So the chance to interview Matthews – as generous a bone as your caring editor has ever thrown a freelance chump like me – was an opportunity to revisit my childhood. I was as adrenalised as a ten-year-old jumping the fence, autograph book in hand, as the final siren sounded at Princes Park.

I’ve been gathering questions from my dad and brothers, all keen Hawks supporters ...

It’s a great thing about the footy, the way it keeps families together. It’s one of the few things that families do together. I have grown-up daughters, 38 and 36, and they were growing up while I was playing and then I was involved in coaching. I’m looking forward to actually being able to take my grandchildren. Whether they’re interested or not is another matter. I have a ten-year-old granddaughter – I don’t think she’s terribly interested. The four-year-old boy might be.

[Pauses] Probably Gavin Brown and Tony Shaw at Collingwood, and Michael Voss and Jonathan Brown at the Lions. The “hardness” for me is the guys who are prepared to just keep their eye on the footy and attack it so hard that their body becomes a battering ram … I always thought Gavin Brown and Michael Voss were just that. They attacked the ball so hard … They weren’t deliberately trying to hurt other players, but they still did.

My dad thought it might’ve been Des Dickson, who played at Hawthorn in the ‘60s, and wondered if you ever saw him?

[Thoughtfully] Des Dickson … before my era. That’s more the people who might hurt you. He was a bit before my time, but he had the fearsome reputation – a bit like Ronny Andrews playing for Essendon when I played – and probably rightly, that he might well hurt you, inflict some punishment on the opposition players at any moment. Even, I suspect, back in that era, the bark was probably bigger than the bite.