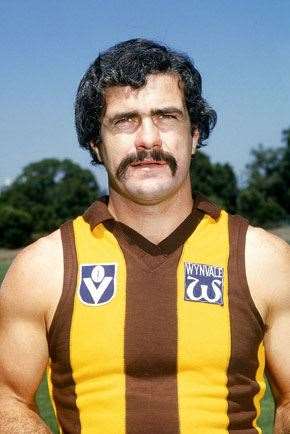 How do you rate the three great Hawthorn full forwards – Hudson, Dunstall and Franklin?

They’re all magnificent goal kickers. Peter Hudson as a goal kicker probably had no peer. But Dunstall, his ability to chase and pressure-out the forward line, I think elevated him to be the best of the full forwards in my time of watching, and the most valuable. He kicked the goals, but he also maintained that defensive pressure. Not many of the others can do both. Hudson just had an enormous gift for getting the footy. Franklin’s a physical freak. He’s probably the player I most enjoy going to watch. What he can do for a bloke over 198cm, almost ruckman height, his manoeuvrability and his ball skills and his stamina, he’s genuinely the physical freak.

I heard a definition of culture – it’s what you do if no one tells you what to do. Culture changes with people and I’m not a great believer that a club has a certain culture over the generations. You have a certain culture when a certain group of people are there and when those people are no longer there, usually the culture changes as well. One of the things that was a little bit different with the Brisbane Lions, being a new club and not being there for generations, we didn’t have a powerful past player lobby. Sometimes they aren’t terribly helpful.

This question’s been asked before, and there are various theories, but why do you think Hawthorn produced so many coaches out of that era in the ‘70s and ‘80s? (At last count there was Parkin, Matthews, Knights, Wallace, Eade, Ayres, Schwab, Judge and Buckenara – all at AFL level at various times).

Particularly with the Allan Jeans-coached players, part of the aftermath of playing in seven grand finals in a row is that you get great reputations, you have a successful era, then a lot of the players have the characteristics to make good coaches as well.

Was there anything passed on through that coaching dynasty – a philosophy of coaching, so to speak?

I look back on my 17 years and I was coached by three men – John Kennedy, David Parkin and Allan Jeans. Now I think they’re all in the Hall of Fame. Incredible … They’re all dual premiership coaches and they’re all icons of the coaching profession, so I’ve never had a bad coach, basically. I was zoned to Hawthorn, so I didn’t have a choice … but I look back and I think we were really lucky we had John Kennedy as our first coach. John’s an incredibly talented man, but seemingly without ego. And I reckon that when we went there, he kind of just convinced you, made you believe that when the crunch comes, the team has to come before the individual. And the individual doesn’t really like that because everybody’s in it for themselves.I reckon that’s almost like a belief system. And I reckon the people who played under John Kennedy believed that and I think that infiltrated through the David Parkins, and Allan Jeans was of the same school. And it’s easy to say, everyone says the words, but John more than anyone lived it, I think. That was a great training for team sport that I got as a 17-year-old when I went to Hawthorn. I always look back on that as one of those subtle things that was probably really valuable.