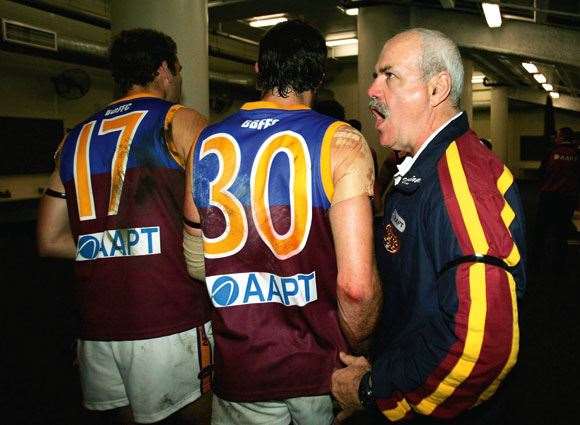 How do you receive an accolade like Player of the Century when you look over the vast history of the game?

To be honest, it’s fantastic for someone to have said that. I mean, my clear ambition was to be the best player ever, and you never can be that. But the fact there have been some people who have actually said that, I’m very chuffed by that.

What do you think of the statue of yourself outside the MCG?

It’s an honour, not that I see it all that often. If people ask, “What’s your favourite place in the world?” I usually say the MCG. It evokes so many things that’ve been good, so

to have the statue outside is good.

Did you have a day job throughout your playing days?

I left school and I was a trainee at Dunlop Automotive. I sold trucks for a few years. I had a sports store for five years and that was when shopping hours were Friday night and Saturday morning. I played my best footy in that era, my prime. I’d be in there selling footy boots on Friday night. I’d go in for an hour and a half on Saturday mornings, and then off to the footy. I look back at that as one of those things – physically it might not have been incredibly helpful, but what it did was keep me relaxed and kept my mind off it. Keeping occupied is pretty important, just as a mental tool.

Do you think that’s why we see so many professional footballers behaving badly these days?

But they’re not behaving badly during the day. The behaving badly tends to be weekends. When I played in that era, not many would’ve drank during the week. Some might’ve, but Saturday night we binge drank. It was just more accepted in that era. It’s horrible to think in the pre-drink driving era the state you turned up in at Sunday morning training sometimes. The modern footballer drinks heaps less than the footballers used to in previous eras. So I don’t hold that the “not working” has any relationship to “every now again a player drinks too much and does something stupid”.

Do you believe sporting clubs can make you a better person?

Yep. Totally. Whatever you might’ve been, you will be a better person coming through a sports club, because it teaches you discipline … I would argue that elite sport never actually makes you a worse person. It makes you a better person. But there are about a thousand of them, so it doesn’t mean that every elite sportsperson is going to be a fantastic role model at all times. I do think the sporting environment assists you. The only thing is, there’s always a concern that you’re stopping them growing up instead of teaching them to grow up. And the era of player managers can really come under that umbrella. Nowadays, every player has a manager and the manager’s job is to keep him as his manager, so I’m not sure whether many managers stop them growing up because they like them to be beholden to them … I heard one story of a bloke who’s married, a 26-year-old, his manager was still paying his bills. I mean, that’s stopping them growing up.