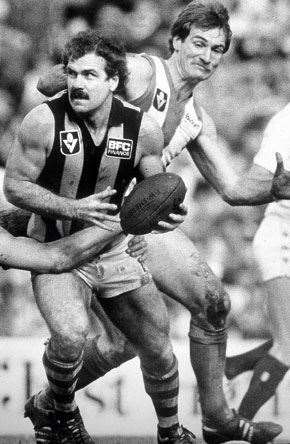 Lethal Leigh on the prowl for the Hawks in his prime. image: Getty Images

That old line of Kennedy’s seems to have gained new currency: “Don’t think. Do.” I kept hearing that in the lead-up to the grand final last year.

It’s interesting, because one of the things you know when you play an instinctive sport like Australian football is if you think, it’s too late. One of the things you always know at the end of the game is that if you played well, you would’ve almost not consciously thought at all. If you play badly, you always think, “I’m thinking too much and I’m not doing.” One of the things I used to do as coach of the Lions was say, “When the game stops and the umpire’s got the footy, you’ve got a few seconds to think: What am I supposed to be doing? Where am I supposed to be? For the rest of the game, you haven’t got time to consciously think. You’ve got to get on with instinctively doing whatever first thought comes into your mind.” And that was it in a few short sentences.

There have been some famous one-liners in coaching. Your own “If it bleeds, we can kill it” and Clarkson’s “Kill the shark”.

I think we all react quite well to themes and as a coach you’re always trying to see if you can think of a theme that might just prod everybody … And that was a theme I always liked, that Arnold Schwarzenegger line from Predator, when he saw the green blood of the alien and said, “If it bleeds, we can kill it.”

Now that you’re not involved with a top flight club, do you support anyone, or are you neutral?

I think generally I’m a footy fan who likes the footy, but I’m not a keen supporter. A keen supporter feels emotionally good when they win and a bit down when they lose. I’m not in that category. But the team that you play for is the club that tends to, I guess, own you or want to own you, because I guess playing is what the game is all about. I mean, coaching, you’re sitting in the stand watching. No one sees you. So I’m involved in three clubs, and even though the Lions are the most recent, I think Hawthorn have always embraced me as a former player, and that’s a closer link than a former coach, I think.

Can you see yourself coaching in the AFL ever again?

Well, the answer’s “no” today.  Do I want to coach again? There might come a time when I want to coach again, but I think my time in football coaching has almost expired, partly because the late ‘50s coaches aren’t too fashionable in AFL. So, even if I wanted to coach again, I suspect the unfashionability of my age bracket might prevent that happening. So, emotionally and practically, I think it’s very unlikely.

Was there ever a lingering desire to come back to coach Hawthorn?

At odd times there has been. I kind of think that I’m happy … I think of a guy like Peter Knights. He still has a good relationship with Hawthorn, a great player, but he coached Hawthorn at a difficult time. Coaches and footy clubs very rarely end harmoniously. And I chose to do that up here [resign from the Lions] because I just wanted to make sure I went a year early rather than a year too late. On that basis, I’m just happy enough that I’m the ex-Hawthorn player and haven’t coached and had the chance to be turfed out or what have you … Don’t damage the friendship. There was always a little bit of romance, but I think the romance is probably overwhelmed by the practicalities.