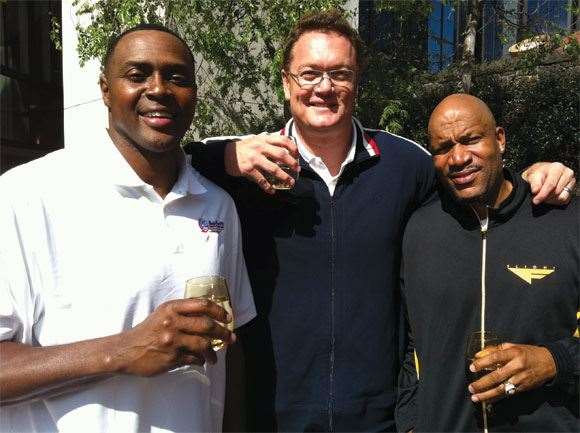 It doesn’t seem too long ago that the Chicago Bulls were the most watchable, most famous sporting team on the planet.Led by Michael Jordan, the Bulls won six NBA championships in the 1990s, netting dual hat-tricks – or “three-peats” – of titles in 1991-3 and 1996-8. (The two title runs came either side of Jordan’s baseball sabbatical.)

While Jordan, team-mate Scottie Pippen and coach Phil Jackson were the mainstays during the six titles, the hidden strength of the Bulls during its golden era was the team’s ability to find effective, efficient starters and role players to complement (and, when required, compliment) His Airness.

Three of the best were Australia’s triple Olympian, Luc Longley, who won three NBA rings with the Bulls in ’96-8, power forward Horace Grant (titles in ‘92-94, and a fourth with the Los Angeles Lakers in 2001) and guard Ron Harper (’96-98, and two more with the Lakers in 2000 and 2001). Their careers had neat intersections. Longley and Grant played briefly together with the Bulls in 1994, Harper and Longley were team-mates during the Bulls’ second three-peat, and Grant and Harper later combined to help the Lakers win a title in 2000.

Inside Sport joined Longley, Grant and Harper at lunch when the trio was in Melbourne as coaches for the NBA-sponsored Asia Pacific Team Camp for elite junior players. With a combined 12 championships, 42 seasons,2800 games, 370 play-offs appearances, nine teams and 30,000 points from their time in the NBA, not to mention a shared list ofteam-mates that included Jordan, Pippen, Dennis Rodman, Shaquille O’Neal, Kobe Bryant, Jason Kidd, Mark Price, Dominique Wilkins, Karl Malone and other idols of the game, there was no shortage of material to draw on for discussion.

These NBA legends, now all in their 40s, were happy to talk old times, good times, being bawled out by MJ, keeping up with Rodman, injuries and hoops. Mostly, however, they were happy to have a laugh and take the piss out of each other, like old mates should

Have you been able to keep in touch since retiring from the NBA?

Luc Longley: We hadn’t caught up for ten years before this week. I haven’t been back to the States very much and this is the first time in Australia for Ron and Horace. We went out and had a meal together last night and went over all the old stories. They reminded me how much Michael used to scold me.

So what would Luc get scolded by Michael for?

Horace Grant: We’d all get scolded all the time!

Ron Harper: Luc? Oh, for almost everything. Once, Luc had this great game against Utah in the play-offs. Well, he had a great first half ...

Ron: Right. Luc had something like 17 points, ten rebounds, three blocked shots – and all this in the first half. At the break, MJ’s all over him: “Luc, you keep playing like that and we’re going to win this championship, easy!” Michael says to him. “Damn, you’re out there beating Karl Malone! You’re doing great!”

Luc: I was feeling so good after what Michael had said to me at the half that I forgot to play ...

Ron: I was telling Luc not to worry about it, but I don’t think he minded. We were laughing so hard. I don’t even think Luc shot the ball in the second half.

Luc: They didn’t get me the ball. Michael must’ve been worriedI’d end up as the leading scorer!

Horace: You see, Harp, Scottie, MJ, all those outside guys would get their shots. Us big guys, we had to go out and find ours.

Ron: Me? I’d only get three shots a game. No one was letting me have a shot! My job on the Bulls was to pass and run back and guard somebody. I’d get my instructions from the coaches: “Go out there and guard John Stockton.” “Okay, can I shoot?” I’d ask them. “What do you mean, shoot?” they’d say. “You only get three shots. Now get out there on Stockton!”

Luc: [Team-mate] Steve Kerr used to run a book before our games about how many shots Michael would take. We’d all be chipping in money. The line was always around 21 or 22. I was smart; I always bet the over.

Horace: With MJ, you’re always going to take the over on that bet. MJ used to tell me when he was hot, he was going take all the shots. And yes, he did.

Was it ever anyone’s job to tell Michael Jordan not to take too many shots?

Luc: When you’re playing with the greatest player in the world, you don’t really want to tell him not to shoot the ball.

Horace: There was a better chance of us winning if he was taking 20 shots than having someone like me take 20 shots ...