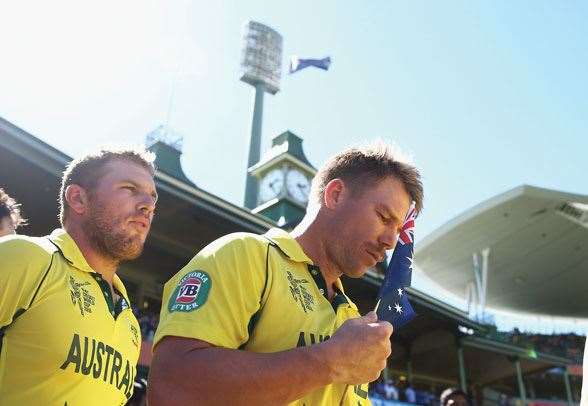 Will Aaron Finch and David Warner ever fly the flag as an opening duo again? (Photo by Getty Images)

The 2016 World Twenty20 competition will offer up some breathtaking opening batting partnerships, but whichever course Australia takes in selecting its lead-off hitters, truth is the Aussies have an embarrassment of riches in the one and two spots.

Even though former opening master blaster David Warner is headed down the order to as low as number-four, selectors will still have to decide between sending out Aaron Finch alongside Shane Watson, or letting the veteran opening proceedings with the man of the moment, the very in-form Usman Khawaja. Or maybe they’ll decide on another combo altogether for the tournament?

All that said, Warner’s exploits across all three formats have seen him become a once-in-a-generation batsman … while he receives superb support from the electrifying Finch.

At their best, Finch and Warner have the potential to be match-winners for Australia on their own, virtually.

Joining Steve Smith in Australia’s middle order will be the X-factor that is Glenn Maxwell. Following the duo is a raft of batsmen vying for a long-term place in the Australian T20 squad, including Chris Lynn, that man Khawaja, Shaun Marsh, George Bailey, Travis Head and Marcus Stoinis.

With all contenders in outstanding BBL and limited-overs form, the make-up of Australia’s batting line-up has already caused some serious headaches for selectors and will continue to do so for some time to come. And that’s a good thing, right?

'Kewell is very fortunate' ...says the guy he replaced