The stage will be Copacabana Beach rather than Bondi’s famous stretch, but Aussies could well be treated to a repeat of the rapturous scenes of Natalie Cook and Kerri Pottharst’s golden Sydney 2000 Olympics moment ... at Rio 2016. Taliqua Clancy and Louise Bawden are among the top half-dozen women’s beach volleyball pairs in the world; when they land in Brazil they’ll be gunning for gold.

Rio will be Bawden’s third Olympics. At the 2012 Games she partnered Becchara Palmer in one Aussie team, with Cook and Tamsin Hinchley in the other. In a previous life the Victorian, 34, was an indoor volleyballer, representing the home team in her Olympic debut in 2000.

Relatively speaking, Clancy, from Kingaroy in Queensland, is only just warming up, but the now-23-year-old has been based at the South Australian Institute of Sport since she was 17. Sure, these two six-feet-tall supreme athletes are at opposite ends of their sporting careers, but their record since teaming up in 2012 shows they complement each other on the sand perfectly.

At the end of the 2016 FIVB World Tour, also taking into consideration points earned from the 2015 series, the 15 top-ranked teams will automatically qualify for Rio. Clancy and Bawden are sitting very pretty in sixth spot, with a last-chance Asian Continental Cup tournament – to be held in Australia in June – as a back-up. Not that they’ll need it, but that tournament may just present an opportunity for another Aussie women’s side to book their flights to Brazil.

Here, Clancy and Bawden blast some myths about beach volleyball being a mere frolic on the sand. As you’ll discover, this sport is a bit like water polo: unless you’re fit, it’s impossible to play properly. And these girls are fit and firing.

TALIQUA: “I started playing indoor volleyball in high school. I grew up in Kingaroy, Queensland. I started playing because my aunty played it at school and so when I got to high school I thought I’m going to do it as well. I was lucky enough to be talent-identified at a schools indoor cup event in Queensland, so I began going to a few camps. I was offered a scholarship with QAS, which was the first time I had played on sand. From there I earned a scholarship with the AIS for beach volleyball, based here in Adelaide. I moved here when I was 17 and I’m 23 now ... I’ve been here a while.”

LOUISE: “I was also an indoor player prior to starting in beach. One of my very good friends, Tamsin Hinchley, competed at the Beijing Olympics with Natalie Cook. I travelled over to Beijing with another friend to support them. On that trip I was very inspired by their performance, and by the game. “I started asking myself whether or not there might be an opportunity for me to get involved in beach volleyball before my days in sport were over. After that trip I pursued some training opportunities with Tamsin and then followed on with some contact with the national program, here in Adelaide, seeking out a chance to come over here and train. Fortunately they allowed me to do so, which led to a full scholarship with the national team.”

TALIQUA: “Generally, we’ll do gym three times a week, but this will depend on what part of the season we’re in. At the moment we’re in pre-season, so there’s a bit more of a gym focus than on the sand. But we do still have five sand training sessions each week. Some of these – twice a week – currently include conditioning work. Two sessions are also dedicated to speed and agility. We are based in Adelaide at the South Australian Institute of Sport. They have man-made courts here and we use their gym as well. Our strength and conditioning coach, Ben Haines, is also part of the Institute’s program.”

LOUISE: “Each sand session lasts close to an hour and a half; we try to train for a period of time that extends the length of a long match. We are looking at maximum training times of 45 minutes to an hour, but probably around 80 minutes including warm-ups. At the moment our training has a real technical element to it. We break things down a little bit more than we would during the regular season. As we move closer to competition in the New Year, things will speed up; we’ll do a lot more competitive-style drills and use more match-play training techniques.”

TALIQUA: “Serving is the one skill where, as a player, you have full control of the outcome of the play. Most new players start with an underarm serve. When you get to the top level of the game, you’ll use a float serve. You hit the ball with a firm wrist, trying to reduce topspin. Another variation is the jump/float. Here, you’re jumping and making higher contact with the ball. It is all up to the server; this serve drops faster, or stays in the air for a range of movement. There is also a jump serve, which is the serve I do a lot. It is similar to spiking the ball. You throw it up with a bit of top spin, take a spike approach, and then contact it. You reach the ball at a higher point, which means you can very quickly change the ball’s angle and trajectory.”

TALIQUA: “In most beach volleyballers’ minds, you can’t practise passing – or digging – enough. It is all about the reps. Unfortunately it doesn’t get any easier the higher the level you play at. It is one of those skills which you have to keep fine-tuning. It is important to make sure you’re watching the ball onto your platform. Wherever you are facing when you make contact is where the ball will go. If your hips are facing outside the court, the ball will go outside the court. When I was a lot younger there would be targets set up in the middle of the court which we’d aim at. But again, it’s all about repetition.”

LOUISE: “You start with the foot opposite to the hand you’re going to hit with. I am left-handed, so the steps in my approach will be right-left-right. My right foot will finish slightly forward. At that point I will be loaded into a jump position. As I’m taking off, I’ll be swinging both of my arms through up high above my head, reaching as high as I can. Then my left elbow traps back and I’m looking to make contact with the upper third of the ball. Then, using my wrist, I’ll roll through and as I swing I’ll follow my arm swing through back down towards my knees. Different things, like the height of your elbow, can sometimes be technically adjusted in order to maximise the contact height of your spike.” 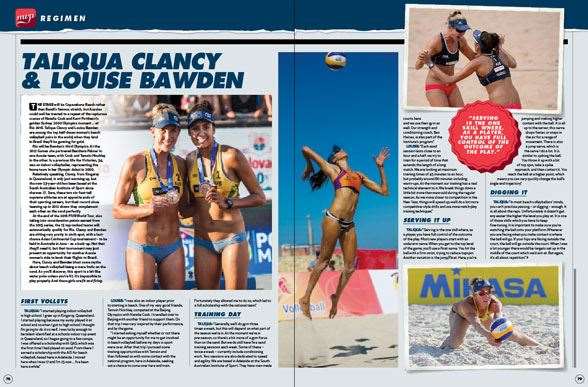 As the girls appear in the February 2016 edition of Inside Sport. OUT NOW!

LOUISE: “We do a lot of different drills that develop our footwork and lateral shuffling. We also work a lot on penetration. You want to try and get your hands over the plane of the net without touching it. So the way I move my arms, the speed at which I’m locking them out, and staying really strong and balanced through my core is all very important for creating a block that’s taking away the maximum amount of space for my opponent. The way that I’m pushing over the net is something I practise a lot. Coaches will hold small balls so that I have to overextend and reach further to really stretch and maximise my ability to impact on the hitter.”

TALIQUA: “Lou’s strength is that she is very athletic, but she is also a very determined and competitive player. The attributes she brings to the court means she plays a very big game. She is a great spiker; people really struggle to dig her balls. And she is always for the team, which makes us so strong.”

LOUISE: “Taliqua is very physically talented; she is a gifted athlete. But more than that, I think her determination, her love for the game, and her ambition to reach the highest standard she can, really drives our team a lot. She is a very fast learner; she picks up things very quickly and applies them well.”

TALIQUA: “We do a lot of shoulder rehab to keep our scaps really strong. We do quite a lot of Theraband. Also a lot of glute work to make sure we don’t injure our backs. This keeps our knees in check and maintains our overall strength. They are the key areas. Leg strength is very important. We hit the gym pretty hard. We play a pretty physical game, us two. Sometimes we’ll do circuits in the gym, sometimes we’ll do cluster sets, but mainly it’s all about repeat power; just being able to get off the sand quickly. For me, it’s about digging and getting up fast so I can go and spike the next ball. Squats, single-legs, it all keeps us ticking over.”

LOUISE: “Anyone looking to get fit should definitely try beach volleyball; it’s probably the best all-over body workout going around. But for us specifically we need to really address knees, back and shoulders as priorities for injury-prevention. Part of our strength and conditioning routine is always looking to increase our leg power and the stability of our joints through our hips, knees and glutes. And definitely supporting the shoulder joints to be able to sustain the loads required to spike up to 1000 balls a week.”

TALIQUA: “You kinda get conditioned to the sand after playing on it for a while. But the stronger you are, the better you can hold yourself. Our speed and agility sessions keep us efficient on top of the sand. They help us use the right muscles and take the right steps to get to the ball.”

LOUISE: “From the feedback we’re given from our speed and agility sessions, having your hips facing in the direction you want to move is a big determinant for how fast you’re going to be able to run and maintain balance. We do lots of drills where we’re changing direction, running backwards and having to turn around, or hit the ground and get up again. We are always getting feedback from our coach about our foot speed and hip direction, all of which supports our maximum output.”

TALIQUA: “Peoples’ questions about our hand signals are often interesting and funny. They watch you making them and try to figure out what they all mean. But actually it’s just so simple. One finger pointed means ‘line’, two fingers might mean ‘block-angle’ and one hand just tells you the position on the court to serve to. They must think we’re doing amazing tricks, but it’s actually all pretty basic.”

LOUISE: “Probably questions that some people ask about bikinis are pretty irrelevant and obsolete in this day and age, in my opinion. I don’t think our playing uniform is something that requires a lot of attention, especially when we’re competing at the extreme-high level we are. We invest a lot in being really refined, professional athletes. So the bikini issue should fairly die a natural death.”

TALIQUA: “We are definitely going for gold in Rio; a podium finish is right there for us. So it’s really exciting that we’ve given ourselves a really good opportunity at the end of the season to really go for it.”

LOUISE: “We are in sixth in Olympic ranking; the top 15 automatically qualify for the Games. Every time we secure a great tournament result on the World Tour that betters our average, our worst one will drop off and that new one will take its place ... and then obviously improve our standing. We are hoping to keep our improving form going right up until the end of the Tour.” 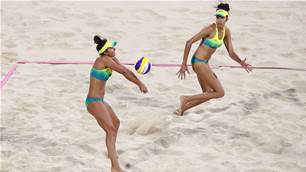 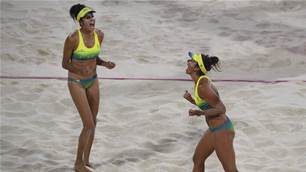 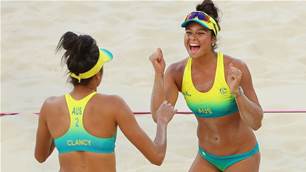 Taking it one game at a time