Not since LeBron James in ’03 had there been so much certainty about the NBA’s number one draft pick. Meet Blake Griffin.

Not since LeBron James in ’03 had there been so much certainty about the NBA’s number one draft pick. Meet Blake Griffin. 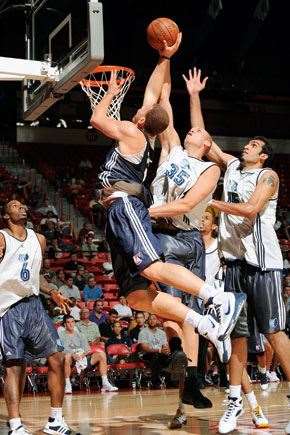 The LA Clippers were “on the clock” with the first pick in the 2009 NBA draft, but they might as well have introduced Blake Griffin straight after they won the draft lottery.There’s a lot to like early on in Blake Griffin’s career. The 20-year-old, 208cm, 113kg forward’s off the charts athletic abilities and his toughness and tenacity make him the perfect storm of strength and work ethic. College Player of the Year gongs – the John Wooden Award and Naismith Award – as well as awards judged by the Associated Press and Sporting News magazine were scooped by Griffin for his efforts throughout his 2008-09 college campaign. He gained national recognition in June with his number one selection and with it the eternal expectation and scrutiny of the basketball world.A coach’s son, Griffin definitely has the mental game and winning attitude it takes to become a great player. Now the league waits with anticipation at basketball’s latest headline act.

NBA analysts have likened Griffin’s raw strength, relentless motor and jumping jack legs to that of NBA MVP big men Karl Malone, Tim Duncan and Charles Barkley and perennial NBA All-Star Amare Stoudemire.It’s rare to find elite-level talent that also possesses the Jordan-esque character and drive to outwork anyone. Griffin has immense potential due to his superior athletic ability and willingness to put the work in to improve.The imposing forward clearly stood out to Clippers coach Mike Dunleavy. “The night of the lottery, when we got the lucky bounce we’d hoped for, it was jubilation,” says Dunleavy. “We’re getting an incredible player and an incredible person with an impeccable work ethic.”He’s a fiery, emotional leader; the team undoubtedly goes as he goes. Griffin has an almost mindless killer instinct and intensity level, giving 100 per cent every time he steps on the court, which should see him as a dominant scorer and rebounder in the league for years to come. 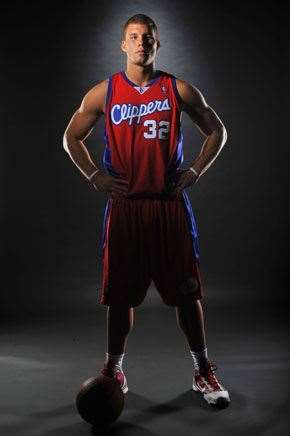 What can he do?

Griffin averaged 22.7 points and 14.4 rebounds a game this past season with the University of Oklahoma. While he doesn’t have an extremely long wingspan, Griffin is coming into the league with a muscular, NBA-ready body.He finished the 2008-09 season with a Big 12 Conference (central United States) record of 30 double-doubles, one short of the NCAA record set by NBA legend David Robinson in 1986-87. He also set a record for the most rebounds in Big 12 history in a single season with 504.The consensus is that Griffin has all the tools to be a very good pro. How quickly he becomes that is another matter. The Clippers are an extremely dysfunctional ball club coming off a down year thanks to a long list of injuries and in-house fighting.Finishing the season with a staggering 19 and 63 record, the Clippers hope the emergence of a new star is imminent. They’ll need to build around Griffin and put in place a system which maximises his seemingly endless abilities and potential to become a more dominate team in the NBA, perhaps making a run for the finals in years to come.One thing remains a certainty. Anytime you take a tremendous athlete with a great work ethic, you have a chance for greatness, a la Dwight Howard. Griffin will evolve into a great player and what’s scary is that he looks nowhere near the finished product.

What do they say?

“He’s the most amazing athlete I’ve seen who plays the game with amazing toughness … He’s a wrecking ball who loves contact in the paint.”

“He’s somewhere between Charles Barkley’s explosiveness and ability to rebound and Tim Duncan’s size and ball-handling skills out on the floor.”