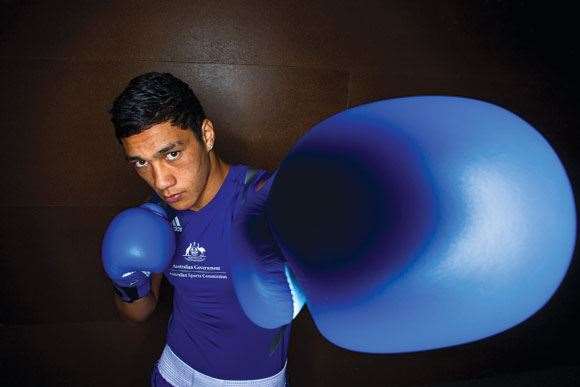 Win, lose or draw, 17-year-old Jai Opetaia will create history at next month’s London Olympic Games as Australia's youngest ever competitor Australia has ever sent to the tournament. If he wins gold, that will certainly be more history: Australia has never won gold in Olympic boxing. It would make Opetaia a heavyweight talent in more ways than one.

At 17 years of age, Jai Opetaia won’t boast the experience of many of his chellengers, but he’s certainly not heading to London 2012 to make up the numbers. Having grown up idolising unbeaten American boxer Floyd Mayweather Jr,  self-confidence won’t be an issue. “I’m not going to the Olympics for second place; there’s no doubt I want to win,” he says. “The preparation has been harder than anything I’ve ever done.”

He’s already a winner, though, in the eyes of one supporter; just making the Aussie team is an achievement his father and coach, Martin Opetaia, is exceptionally proud of. “Going to the Olympics is one of the biggest things you can do as a sportsperson. For him to do it so early in his career is a bonus,” he says.

Special to Opetaia was his victory in Kazakhstan against the world’s best juniors, where the southpaw stated his intent from the first bell. “I was just going there to do my best. In the first fight I came up against the European champion, who was meant to be the best, but I handled him really easily,” he says. “I had him on zero points going into the final round and won. That was a big confidence boost. Then I just kept fighting and winning and it worked out well.”

In 2000, Opetaia’s father, a national super-heavyweight champion in 1987 and Australian representative at the Oceania Games in 1988, made his professional fight debut. Watching on was Jai, who would follow in his father’s footsteps. “He’s a fourth-generation boxer from my side of the family,” explains Martin. “He sort of had no choice but to get into boxing, the poor bugger.”

Two years later Jai, then eight, started on his pugilistic path when he took up kickboxing: NSW regulations prevent kids under 14 from boxing. Back then he says he was a “chubby” kid instead of the imposing 91kg figure he cuts today.

He had his first fight in Wyong, an experience he’ll never forget. “I walked in and saw these big kids and was thinking, ‘They’re massive’,” he says. “About five minutes later I found out I was fighting one of the big kids that I’d just seen. I ended up bashing him.” Jai kept kickboxing while training for the sweet science with his Dad at Wyong’s Bargeros Gym. Now, three years later, his Olympic chance has arrived.

Stylistically, Opetaia mirrors a boxing legend the Australian public saw on our shores in 2009. “He fights like Roy Jones Jr,” says Martin. From a technical point of view, the comparison’s correct. In attack, Opetaia uses his right jab to keep opponents at bay, before unleashing his lethal left hand or combination punches. When facing an onslaught, he weaves like a ninja to minimise the effect of any oncoming traffic.

“Jai’s best attribute is his unpredictability. He’s good on his feet, he has good height and he moves quite well for a heavyweight. Anything is possible in London.”

Nicolson dedicates gold to her brothers