Mitchell Johnson says he could link with the Perth Scorchers for this summer’s Big Bash League after holding talks with coach Justin Langer.

The 34-year-old former Test bowler said should he decide to play on, the Scorchers would be his preferred option.

“We’ve had a chat in the past couple of weeks about it, and (Langer) he’s pretty keen for me to play for the Scorchers – as I also am as well,” he said.

“It’s something that I’m thinking about at the moment, where I want to go with my cricket. (Do I) play the Twenty20 circuit or not?

“I’m probably leaning towards playing at this point in time, but I’ve got to make a decision shortly.”

Johnson said the opportunity to play a mentoring role to the Scorchers’ fellow left-armers Joel Paris and Jason Behrendorff added to the appeal of going around again this summer.

“That’s probably the big thing that I’m looking forward to, is being involved with the young guys coming through like Joel Paris and Jason Behrendorff,” he said.

“I’ve been so used to being the No.1 strike bowler for many years (and) it definitely puts pressure on you to perform.

“He’s (Langer) sort of taken that away from me a little bit, he wants me to go and be with the boys, enjoy the atmosphere of the dressing room, train with the boys, help out." 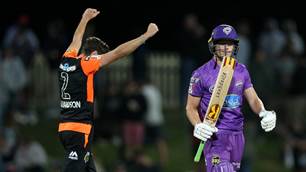