The NBA All Alphabet league presents a line up that really messes with the standard expectations of what a basketball fivesome should be.

We try to put out a team that conceivably could work together on the court which generally means something close to a standard two guard, two bigs and a wing line up. A set up like this N’s team is rare, but thanks to Oklahoma City Thunder coach Billy Donovan, we’ve seen what a 3 point guard line up can do.

The pool for the N’s wasn’t deep, but it does provide a pair of all time greats, as well as a cultural touchstone of the game.

A man that could have been a soccer or hockey star, we’re eternally thankful that Steve Nash choose to throw a ball through a hoop.

Nash was a late bloomer. Growing up in Canada (he was born in South Africa to British parents), Nash spent much of his youth playing soccer (his father and brother were both professional footballers) and hockey (he was neighbours with the Courtnall brothers). He didn’t start playing the game until he was 13 years old. As a lightly coveted recruit, he attended a smaller school in Santa Clara, playing with precisely zero future NBA players. As a 22 year old mid first round pick, Nash was again forced to bide his time, not scoring in double figures per game until his 5th season, by which time Phoenix had moved him onto Dallas, where he formed a formidable partnership with his great friend Dirk Nowitzki. After earning a pair of All NBA and All Star appearances in Dallas, the Suns saw the error of their ways, resigning the 30 year old to a 6 year contract. It was a risk, for sure. Fair to say it paid off.

In his second stint in the Valley of the Sun, Nash really broke out. As the orchestrator of coach Mike D’Antoni’s famed ‘7 seconds or less’ offense, Nash claimed back to back MVP’s in his first two seasons back in Arizona. He also won the balance of his 7 All NBA nominations and 8 All Star appearances in Phoenix, as well as leading the NBA in assists on 5 occasions.

With a game that’s defined by more than just the statistics, Nash changed the way the game was played. Wayne Gretzky changed hockey by utilising the area behind the net. Nash used the baseline in ways that most point guards had not: he drove to set up plays with the defense turned around, or kept his dribble to switch the point of attack. Despite his slight build, Nash’s 6’3” frame allowed him to take the rough and tumble of constant drive and dish plays, although the debilitating back injuries of his late career may have their origins in these types of plays.

A career line 14.3 points and 8.5 assists show two things: elite play making, but average scoring. If there is one regret to Nash’s career, it’s that he didn’t shoot the basketball more. An elite jump shooter, Nash led the league in free throw percentage twice, shooting over 90% for his career. He was a career 42.8% shot from behind the arc, yet only attempted 3.2 per game. Defensivley, Nash was intelligent, but overall poor. His lack of lateral movement and strength limiting his effectiveness.

Nonetheless, in the modern game, Nash would be dynamite. An elite shooting 6’3” point guard with wonderful play making and below average defense……sounds a little Curry-esque to me.

Another former Lakers #10 lines up alongside Nash, although wearing that singlet in purple and gold is not all they share. Norm Nixon’s ability to orchestrate the fast break and manipulate the defense in the half court was positively Nash like.

With road runner speed (Meep-Meep!), Nixon was wonderful in the open floor, taking the outlet pass from his big man, beating 3 defenders down the floor, drawing a 4th before sliding a pass to an open teammate or finishing the play himself.

Nixon was also an early exponent of the look away pass, sending off ball defenders away from his intended target before rifling the ball to a man cutting into the space Nixon's slight of hand had just created.

The two time All Star played his entire career in Southern California, firstly as a member of the Lakers, where he won a pair of championships while mentoring a young Magic Johnson, before being traded to nearby San Diego for Byron Scott. After one season in San Diego, the Clips moved to LA, where Nixon played out his career.

Unfortunately the back end of Nixon’s career was wiped out through injury. Aged 30, he missed an entire season due to a knee injury picked up playing softball in the offseason, then tore his achillies when close to a return, resulting in a full 24 months away from the game. He returned for one more season, but a combination of injury, age and rust had eroded much of his abilities.

One more comparison to his N Team running mate:

One man is often overlooked, even in his era. The other is a 2 time MVP. Yet their career averages are startlingly similar.

Acquired in a draft day trade with Denver in 2004, the decorated collegiate superstar (2004 winner of the Wooden, Naismith and Cousy Awards) kick started a new era in Orlando alongside that draft’s top pick, Dwight Howard.

Nelson was never an out and out star player, although he was named an All Star in 2009 (unfortunately he missed the game with a shoulder injury). Rather, Nelson was the perfect player for the Howard era Magic: a tricky ball handler with a very low turnover rate, who could run the pick and roll, was a crafty finisher around the hoop and a dead eye outside shooter. His ability to spot up around Howard kickouts or Hedo Turkoglu drives made him a vital cog in the those Magic teams.

Injuries led to a swift decline in Nelson’s game, although he stuck around the game until his age 35 season. In 10 seasons as a member of the Magic, Nelson gave Orlando 15.5 points, 6.6 assists, 1.2 steals and 37.4% shooting from beyond the arc.

A low key sliding doors moment in recent NBA history is Nelson’s aforementioned shoulder injury. If you’ll recall, Orlando made the finals that season, falling to the Lakers in 5 games. Nelson controversially returned from injury despite a 4 month layoff, but was ineffectual. If Nelson hadn’t of been injured, might he have been able to sway the result some? Considering 3 of the 4 Lakers wins were by single figures, it’s conceivable that he could have helped. If Kobe doesn’t win that first Shaq-less ring, where does that leave his legacy? Does it elevate Dwight to all time great status? How does coach Stan Van Gundy’s career pan out?

There is not much to say about Dirk Nowitzki that hasn’t already been said.

He’s the greatest shooting big man of all time; the first European raised player to win the MVP; the highest scoring foreign player of all time (and 6th overall). His impact on the game is immeasurable.

Considering some of the foreign flameouts that came after him, it’s entirely conceivable that without Nowitzki we wouldn’t have the NBA that we have today. We don’t get Manu Ginobili being stolen by the Spurs; Pau Gasol doesn’t become a top 3 pick; The influx of players from South America and Australia doesn’t happen. Stylistically, do we end up with a player like Kristaps Porzingis if Nowitzki isn’t a superstar? We might not even get a Davis Bertans if Nowitzki flames out in the NBA.

Nowitzki’s style is inimitable. The 7 foot German’s languid, loping style belied his athleticism. He was never a leaper – though a young Dirk dropped the hammer on many an unsuspecting fool - but possessed very good speed, and incredible agility. It was his footwork and the understanding of angles drilled into him by mentor Holger Geschwindner that gave Nowitzki a way of succeeding on the court that nobody had ever seen. His array of spins, jabs, fakes, feints, leaners and the patented one legged fadeaway confounded NBA defences throughout Nowitzki’s 21 seasons in Dallas.

It’s not the best part of his game (he was a high post assassin) but Dirk’s 3 point shooting was transformative. The career 38% shooter from deep was the first 7 footer to weaponize the 3 point arc. He never took more that 4.9 attempts per game. If Dirk were born 15 years later, it’s frightening to think how dominant an offensive force the 14 time All Star and 12 time All NBA player could have been.

The centre on the N Team was a fine player in his own right. However he’s more readily recalled for his cultural touchstone moment as the inaugural winner of the NBA All Star weekend dunk comp, back in 1984.

Nance was an excellent two way player, who claimed 3 All Defensive awards and played in 3 All Star games. His All Star appearances were in 1985, 1989 and 1993 – a testament to his remarkable fitness and consistency.

His rookie campaign aside, Nance never averaged single figure scoring or less than 7 rebounds per game. He averaged 17.1 points, 8 rebounds, 2.6 assists, 2.2 blocks and a steal per game over the course of his 13 seasons in Phoenix and Cleveland. He retired aged 34, still a double-double threat and a formidable shot blocker, who could realistically played for another 3 seasons at a solid level, such was his athletic ability.

Nance’s versatile game allowed him to compliment just about any type of front court partner. On offense, he could post up and score down low, or step out to consistently knock down a jumper from 18-20 feet. Defensively, his speed allowed him to stick with quicker power forwards and small forwards, whilst still being strong and bouncy enough to smother dreadnought centres.

A consistently underrated performer, Nance is the perfect foil for Nowitzki on the N Team.

One final word on this line up: When naming a five that contains both Steve Nash and Dirk Nowitzki, it’s written into journalistic law that we have to show this photo: 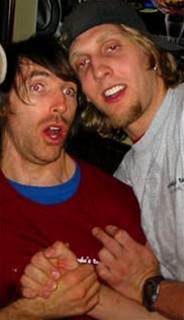