Today we continue our journey through the NBA's All Time Alphabet teams.

As is the custom, following Sunday's A-Team, we'll reveal my B team.

To reiterate my one rule when putting together these lists: I attempt to name a five that would at least somewhat fit together on the court. So you won't find Brad Daugherty lining up alongside the Davis's three (Dale, Antonio and Anthony) here.

That being said, the B Team aren't exactly a traditional looking unit. With options thin at the pivot, I've had to improvise. One thing that this side does have in spades is bravado.

Growing up in Washington DC, Dave Bing was an avid baseball fan. He excelled at both baseball and basketball, but ultimately chose hoops once he was offered a full college scholarship to play at Syracuse. Baseball’s loss was certainly basketball’s gain, as Bing went on to enjoy a Hall of Fame career, spent predominantly in Detroit. Six of Bing’s seven All Star appearances came as a Piston, as did each of his three All NBA nominations.

At a slightly built 6’3”, Bing was an unusual player in his day. Whilst he was nominally a point guard, he was cast as his teams primary option in an era when point guards were traditionally thought of as set up men for their more offensively focused teammates. Bing didn't possess a lightning first step, but he was slippery and creative. His fancy passing was revolutionary at the time, as was his footwork when driving into the key. He was in some ways the proto-Ginobili.

In 1968 - only his 2nd professional season - Bing was the NBA scoring champion, in an era where point totals rather than points per game was the accepted measure (Oscar Robertson led the league in points per game). The former #2 draft pick played out his career in Washington – where he won an All Star MVP – and Boston before retiring at the age of 34. Bing averaged 20.3 points, 6.0 assists and 1.3 steals over the course of his 12 year career.

Remarkably, even playing professional sport was somewhat of a miracle for Bing. At the age of 5, he suffered a catastrophic eye injury that his family, not being able to afford the specialized surgery required to repair it, just had to let heal naturally. As a result, Bing has suffered blurred vision in his left eye throughout his life.

He's also has led a fascinating life away from the NBA. He’s the former mayor of Detroit. He grew up in Washington DC with Marvin Gaye and was very close to the famed crooner until his untimely death in 1984. He’s also the founder of steel industry giants the Bing Group, which has made him much more money than the game of basketball ever did.

It's still hard to believe, isn't it.

Instead of focusing on what's lost, let's celebrate why Kobe is the greatest guard in the history of the game to have his surname start with the letter B.

There's not much left to be said about Kobe Bean Bryant. The son of former pro baller Joe Bryant (and nephew to another pro baller, the delightfully named Chubby Cox), Kobe was always destined to succeed. Much has been made of his adoration – and indeed his attempted replication – of Michael Jordan. Kobe obviously had the moves down pat. He even nailed the celebrations.

What he managed to duplicate better than anything, was Jordan's will. Kobe was, for all of his foibles, a fearless basketballer who was never afraid to try something in fear of it failing.

He was not universally loved in the way that his idol was, but Kobe was nonetheless a truly generational player.

Rick Barry is known for two things: being an ars....ummm....difficult team mate; and shooting a career 89.3% from the free throw line whilst shooting underhand. His abrasive personality and single handed attempt to keep 1930's shooting techniques alive tend to overshadow a glittering basketball talent.

Across a career split between the NBA and ABA, Barry was named to 10 all NBA/ABA teams, won a scoring title as well as a steals crown and earned 12 All Star appearances, playing in the mid season showcase every year of his career until his age 34 season.

Whilst known as a scorer (career 24.9 points per game), he was also a creative play maker, averaging over 6 assists per contest on five occasions. In his final years in Houston, he pioneered the point forward position, initiating the Rockets offense from the wing position.

A smooth moving, slender offensive genius, Barry was a tough matchup. He had rare speed for a 6'7” player, incredible footwork, and used the threat of his feathery jump shot – next to Ray Allen the most technically perfect jumper in the game - to open up passing lanes. His reading of the game at both end of the floor was brilliant. If he wasn't so negative all the time, he would have been an insightful analyst.

Barry is undoubtedly an all time great. He'll tell you all about it, too.

The Hick from French Lick. Larry Legend. The Great White Hope. The Basketball Jesus. Larry Bird: a certainty for the B side.

The Celtics superstar is one of the most unlikely looking legends of the game. Bird was gangly, pasty, kind of dorky looking. He couldn't jump over a folded piece of paper. His gait – especially later in his career - looked painful. Despite all of that, Bird is undoubtedly one of the very best to ever lace 'em up.

Bird's accolades are numerous: 3 consecutive MVP's, 3 championships (2 finals MVP's), 10 All NBA berths, 3 All Defensive selections, Olympic gold medallist. Bird was selected as an All Star in 12 of his 13 pro seasons – his only absence coming in 1989 when the back injury that eventually ended his career limited him to a mere 6 games.

Bird was the basketball equivalent of a 5-tool phenom. He could do it all (except jump, of course): a dominating rebounder from the small forward position, a shifty ball handler, an extravagant passer, and one of the greatest shooters ever to set foot on the hardwood.

Larry Bird was a problem 🔥

For a number of reasons, Bird's defensive game was often overlooked. Make no mistake though, his defensive instincts were razor sharp. LeBron James has perhaps the most famous block in basketball; Larry has it's most famous steal.

Career averages of 24.3 points, 10 rebounds (again, he spent most of his career playing the three), 6.3 assists and 1.78 steals tell it's own story. But Larry very rarely let the numbers speak for themselves. Bird is famously one of the greatest trash talkers in NBA history. Be it calling game winners, getting into it with Chuck Person (another magnificent talker) or calling the 3 point contest whilst still in the dressing room, Bird's bravado was legendary.

A centreless lineup? Outrageous! Six months ago, that may well have been the case, but the (small sample size alert) success of the centreless Rockets makes this lineup more than playable. The other reason for not having a genuine centre in this lineup? A lack of options. Outside of Walt Bellamy, there's not really a player worthy of this five. So, with apologies to the proto-Barkley that is Elgin Baylor, we're going to roll with Sir Charles.

This lineup might be the best trash talking five that we come up with throughout this series. Whilst all of these players are chirpy, Chuck is all caps LOUD. He's never been afraid of controversy. He famously eschewed his responsibility as a role model. But that doesn't take away from the impact the Dream Teamer had on the court. A standout at Auburn, Barkley took the league by storm as a Sixer. A short but explosive power forward with point guard skills, the NBA of the 1980's had no idea what to do with him. Barkley plowed his way through the league to the tune of 11 All Star appearances, 11 All NBA awards, and riled up Michael Jordan by winning the 1993 MVP.

Barkley was the type of player that truly had you on the edge of you seat. His ability to pluck a rebound amongst the 7-footers, take off with the ball, beat half a dozen players down the court and then assault the rack was genuinely breathtaking. Like many well rounded bigs, Barkley was a point guard before a late growth spurt moved him up the positional ladder. Those play making skills never left him, although his shooting stroke – career 26.6% from beyond the arc – clearly never left his native Alabama.

Barkley completes an athletic, switchable, high scoring, smack talking, Hall of Fame calibre B team, that will surely turn out to be one of the very best teams in this series. 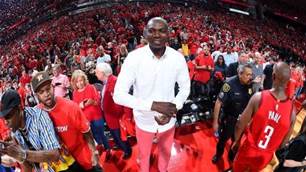