Today's All Alphabet league is brought to you by the letter G!

In putting together the All Alphabet teams that we've seen so far, there have been some extremely talented fives, but perhaps none fit together like this G team. Defensively they're a monster: long, fast, and kind of nasty. There isn't a weak defender – or even an average defender – in the bunch. Offensively, this team can score in bunches, and in a variety of ways.

A reminder that we're trying to put a team together that can fit as a unit. So our G Team centre won't line up alongside Rudy Gobert and the brothers Gasol – we want our unit to work on the floor. As much as we're calling these the NBA All Alphabet teams, we are taking into account pre-merger careers, so the ABA, NBL and BBA all get recognition.

Hal Greer spent his entire Hall of Fame career with the one franchise, although the team moved from Syracuse to become the Philadelphia 76ers part way through his playing days.

Greer was regarded a hair below the two greatest guards of the 60's in Oscar Robertson and Jerry West – not bad company.

High Gear Hal was the type of player that – his blistering speed aside - didn't have an elite skill, but he took nothing off the table. He was a solid jump shooter – even shooting jumpers at the charity stripe – a functional distributor, a very good rebounder for his size, and a tough defender. Considering Greer played his prime years alongside Wilt Chamberlain, Chet Walker and Billy Cunningham, he didn't have to be a dominant proto-Westbrook. He simply made sure that he held up his end of the deal, and let the stars do their thing.

That being said, Greer was still a ten time All Star himself and was named to seven All NBA teams. Despite his unassuming game, Greer was no slouch.

On a team with the firepower that this G Team possesses, Greer's style will fit in perfectly.

One of the most gifted scorers in NBA/ABA history, George Gervin completes the G Team back court.

The Iceman played professionally for 14 seasons, never averaging less that his 14.1 point output as a rookie. He finished his career with the outstanding average of 25.1 points an outing.

A Hall of Famer, Gervin attained All ABA status twice and was named All NBA on seven occasions. He played in 12 All Star games, only missing the showcase as a rookie, and in his final year, played in Chicago.

Gervin was a scorer first and foremost, but he was also an excellent rebounder for a guard early in his playing days, pulling in more than eight boards a game for four straight seasons. Whilst not a defensive demon, he did swipe over a steal and a block per game over his career.

Gervin was a graceful athlete, who at times looked to be strolling around his defender rather than blowing by them, before making an acrobatic move into his fabled finger roll – a shot he would produce from as far out as the free throw line. Gervin was in many ways a below the rim version of Dr J. Gervin led the NBA in scoring on four occasions, tied with Allen Iverson and Kevin Durant, trailing only Wilt Chamberlain and Michael Jordan.

Paul George has proven himself to be an excellent Robin through his career, and with so many Batman’s on this G Team, his ability to morph his game will prove invaluable.

It feels as though PG has been around forever, but he only turned 30 a couple of weeks ago, so still has a large chunk of his prime ahead of him. The one thing missing from his trophy cabinet is a title and teaming up with Kawhi Leonard is clearly his best opportunity yet.

As an offensive player, George is the perfect compliment. He can fill it up when needed with a solid drive game, explosive finishing and excellent catch and shoot three pointer. He’s turned himself into a capable distributor, averaging over 3 assists per game in all of his completed seasons since 2012. Despite Joe Ingles owning him in the playoffs that one time, Playoff P has hit his share of clutch baskets.

As good as he is on offense, it’s defense that sets PG apart. Listed at 6’8”, but allegedly 6’10’, George is long and fast, able to contain the ball carrier and deny space down low in equal measure. The reigning steals champion has great anticipation that, with his long reach, make him a nightmare match-up for opposing guards and wings.

George has 6 All Star appearances, 5 All NBA’s and 4 All Defensive awards to his name already. He could conceivably add another three appearances to each of those before he’s done. And to think that he’s achieved all this on the back of one of the gnarliest injuries in recent memory – no we’re not going to link it here.

The length of this G Team is terrifying. One of the most versatile players in the history of the game, Kevin Garnett forms one half of an intimidating front line.

Garnett was a defensive monster throughout his career, able to protect the paint and guard the perimeter in equal measure. Think Bam Adebayo, only twice as good. Garnett's incredible length (he's much bigger than the 6'11” has was listed at) and remarkable agility for his size made him an impenetrable wall. Frankly, it's a travesty that he's only won a single Defensive Player of the Year award, although he was a 12 time All Defense selection.

On the other side of the ball, Garnett was equally as terrifying. His aforementioned speed and length made him an impossible match up. His long limbed hops into the key led to an impossible to block leaner. His fadeaway was automatic. By the time he'd reached his peak, he was also an knockdown jump shooter from 20 feet. He was also a crafty play maker, averaging over 4 assists per game for 10 straight seasons – including 6 per game in 2003. In the modern game, it stands to reason that KG would have been the ultimate stretch 5, with height, agility, range and play making chops.

The other thing that stood out from Garnett's game is his burning intensity. He never took a play off. Sure, he would sometimes overstep the mark, as Charlie Villanueva can attest to, but that heart-on-sleeve ferocity usually brought out the best in he and his teammates. He carried himself like Chris Paul does these days.

Think about those names that have come up in this section: Adebayo, Porzingis and CP3. Garnett was the best parts of those 3 players, rolled into one remarkable package. Fifteen All Star games, nine times All NBA, 12 times All Defensive, a DPOY and an MVP. Just take a look at the variety of plays in this compilation: brutal dunks; clutch game winners; nifty passing; vicious blocks; sharp steals...KG had it all.

The field for the centre position is loaded for the G Team. With apologies to Rudy Gobert and and the Gasol brothers, Artis Gilmore gets the nod, here.

Gilmore was a star in the ABA and NBA. In 1972 Gilmore pulled off the extremely rare feat of winning both the ABA Rookie of the Year and the ABA MVP – E Team star Julius Erving was runner up in both categories - with averages of 23.8 points, 17.8 rebounds and 5 blocks.

Through his five years in the ABA, the A Train gave his Kentucky Colonels a nightly 22.3 points, 17.1 boards and 3.4 blocks on the way to earning All ABA and All Star status each and every season, as well as four All Defensive berths and a title in addition to his ROY and MVP awards.

In his draft year, NBA teams knew that he was going to the ABA, but the Bulls smartly spent a 7th rounder on Gilmore to secure any future rights to him, should he move the the NBA. When the ABA folded, Gilmore thus headed to Chicago, where he earned four more All Star berths and another All Defensive nomination.

He later moved to San Antonio to form a formidable inside/outside duo with fellow G Teamer Gervin. He played in two more All Star games as a Spur, bringing his career total to eleven.

Gilmore played like the unholy spawn of Wilt Chamberlain and Kareem Abdul-Jabbar. A lithe 7'2”, Gilmore combined the grace of Kareem – and possessed a wonderful lefty skyhook that rivalled Kareem's – and the pure athleticism of prime Chamberlain. He also sported one of the best afro's the game has ever seen. 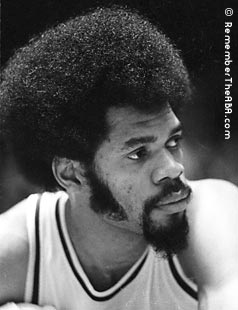