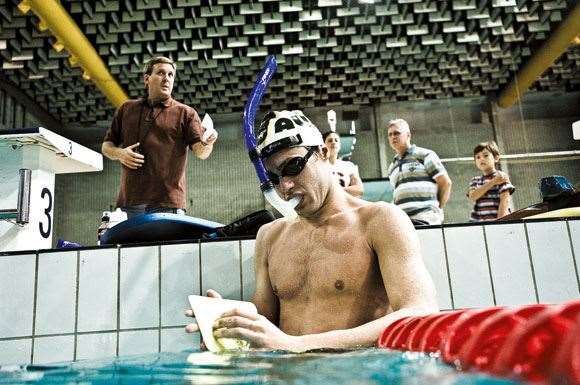 With the swimming world’s attention focused squarely on Rome this month for the FINA World Championships, it’s a curious quirk that few will recognise the name of one of our best chances for gold in the premier men’s distance event. What’s that, you say? Surely with Hackett retired we’re looking decidedly thin in the 1500m ranks? No, not the 1500. That’s not a distance event. The 25km open water swim is a distance event. And 24-year-old Brisbane phenomenon Brendan Capell just might make history repeat.In 2004, at just 18, he won the World Championship, making him the first Australian male to win this event and the youngest ever internationally. In 2005, he backed up to win silver. Injuries have hampered his attempts in subsequent years: in 2006 he was diagnosed with six stress fractures in the left side of his back from overtraining. But under the watchful, expert eye of Michael Bohl at the St Peter’s Western Swim squad, he’s back to his best and primed for another tilt.

In 2008 he was back at the pointy end, finishing second behind Petar Stoychev (current English Channel record-holder and seven-times marathon swimming grand prix series champion) in the FINA Marathon Grand Prix series. He came fourth in the Olympic trial for the 10km and didn’t make it to Beijing last year – but 10k is just warming up for Capell. The longer the race, the better he goes. He races in Rome on July 25.Capell’s marathon feats also include his continued study for his law degree; he’s also studying a Masters of Applied Finance and is a youth ambassador for the Black-Dog Institute, which offers specialist expertise in depression and bipolar disorder. One busy, very impressive young man.

“I did the trials back in February and qualified for the World Champs in July – that’ll be my two races this year. I don’t like to go any more than three or four a year, but in saying that, last year I actually swam the whole World Cup circuit – that was seven marathons in seven weekends. First one was just a 10k, then 36k Capri to Napoli, 19k in Serbia, 30k in Macedonia, and then lake swims in Canada which were 32 and 36k. I came second overall … I was pretty happy.”

“A 25km race takes around five hours to complete. My normal preparation is ten pool sessions a week, usually of 7.5km, but Wednesday night (8km) and Saturday morning (10km) are my longer sessions. But things get mixed up. We might do two heart

rate sets, say Monday and Thursday afternoons, consisting of something like 30x100m, holding your heart rate at 170-180. And it might be a speed set on Tuesday night. 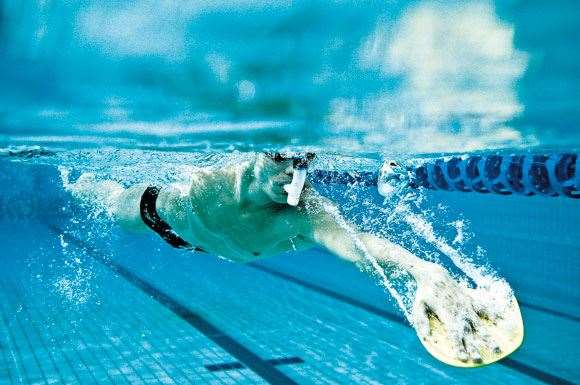 “Most of our mornings are the longer stuff where you do pull-buoy and [hand] paddle work. These sessions you’re often recovering from the main sets at night while still getting your aerobic fitness work in. Pull-buoys and paddles lower your heart rate and you can go a lot faster. You’re not working as hard, but you get the Ks in. Fins are used during warm-downs to break things up a bit. And then you’ve still got to condition your legs with a kickboard – that’s about a K per session. The last couple of years I’ve used the snorkel to take the pressure off my shoulders and neck a bit. I can put the snorkel on and do a 4k swim without even looking up. That breaks things up.

“But Wednesday and Saturday mornings are more race simulation stuff, whether it’s a 5km time trial or 15x500s, trying to come home hard at the end on short rest cycles … Different stuff like that.“On top of that I do two one-hour pilates sessions a week. My physio suggested them when I found I had six stress fractures in my back in 2006 from overtraining; he suggested pilates to maintain shoulder and back strength. I don’t do weights: when you’re doing 80-90km a week in the pool, weights tend to tear you down. For marathon swimming you’ve just got to keep lean and toned and pilates really works for me.“Our coach also takes us for dry land ab sessions four times a week before we get into the pool – that’s 30 minutes of sit-ups, abdominal work, crunches, working on our core strength. I think our coach got the idea for that from the diving team.”

“Stress fractures are pretty rare in swimming. For a while mine went undiagnosed and I was getting fairly frustrated; I just thought it was tightness. They started low in my back and worked their way up to the point where I couldn’t breathe and knew something was wrong. I actually changed physios: Ed Fitzgerald, the Wallabies’ physio, was straight onto it. He got me to go for a nuclear bone scan and I remember the radiologist asking me if I’d been kneed in the back.“I seem to naturally get fairly tight on the left side of my back doing all the work; my left hip also gets tight – I don’t know if that’s in the biomechanics of my stroke, or what. We open water swimmers tend to be a little bit rougher around the edges than the smooth techniques of the pool swimmers.”