Mitchell Pearce says he could play alongside Cooper Cronk to form a formidable halves partnership at the Roosters.

The 28-year-old is back in the country after a trip to the US where he weighed up his playing future following the announcement of Cronk’s two-year deal at the Bondi club.

The NSW halfback was blindsided by Cronk’s signing and understandably upset after a decade with the club which he helped claim the 2013 Premiership.

When quizzed after touching down in Sydney, a tanned Pearce said he would be open to playing with Cronk.

“Obviously, yeah, Cooper is a player you could play with for sure, he’s an Australian halfback," he said.

But whether he can swallow his pride and take a back seat to the Maroons champion remains to be seen.

Even if he stays, Pearce will be in a battle with Luke Keary to claim the other halves spot.

Manly and Cronulla are chasing him with Newcastle another club with sufficient cap space available.

However, the Sea Eagles and the Sharks are leading the race should he choose to depart the only NRL club he has known.

Manly are looking to offload Blake Green to the Warriors and sign Pearce after the Kiwi club offered the five-eighth a rich three-year deal, while the Sharks are circling the Roosters playmaker with Paul Gallen and Wade Graham texting Pearce in a bid to get him to the Shire.

Pearce is expected to confirm his future within days. 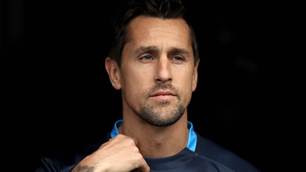 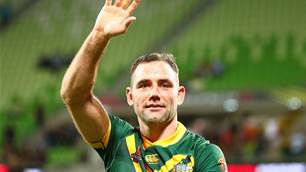 Smith to Pearce: 'Hey mate, come to the Storm'