We look at five matches you can't miss on the run home to the finals series.

If season 2016 in the NRL has taught us anything it is; to expect the unexpected.

Who would have thought the Sharks would become only the fifth side in the 'NRL era' to win 12-straight games and look odds-on favourites to win the Minor Premiership and just potentially break the longest Premiership drought in NRL history.

It would of been hard to predict that mainstays in the top half of the table from seasons gone by; Manly, Roosters and Rabbitohs would have bombed their season despite over the last decade being premiership contending clubs.

From the bunker to salary-cap drama and just about anything in between, this season might be remembered for a plague of off-field incidents. However, just as equally, the on-field drama that we all love about the NRL has matched the off-field antics, to which it is needless to say but 2016 for the NRL will forever be remembered no matter which two ways you perceive the game. 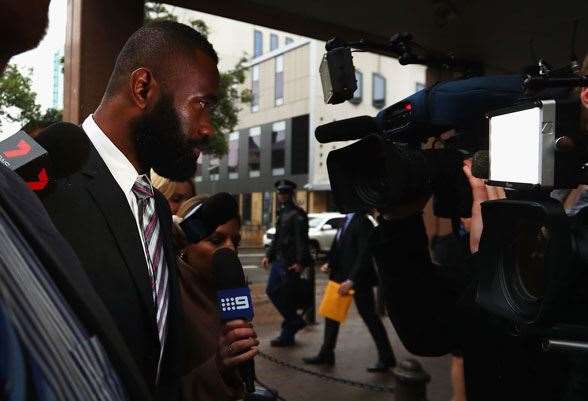 Salary cap scandals, player indiscretions, court appearances and a whole lot of drama. Season to forget off-field for the Eels but do you believe in miracles? (Photo by Getty Images)

But now with Origin done and dusted for another year (and another 12 months of heartache for NSW), all eyes are firmly fixated on the run to the finals series.

So here at Inside Sport we have complied five potentially season-defining matches that can’t be missed.

Both these sides have had stop start seasons, unable to gather any momentum. For the Broncos, like always, the Origin period plays havoc with their NRL season, with the Queensland based side only winning only one of the five games played within the representative spell that has almost seen them plummet out of the top eight. Meanwhile, after a string of team changes over the Origin period, the Panthers are now starting to find the form that their fans would have hoped come earlier on in the season. 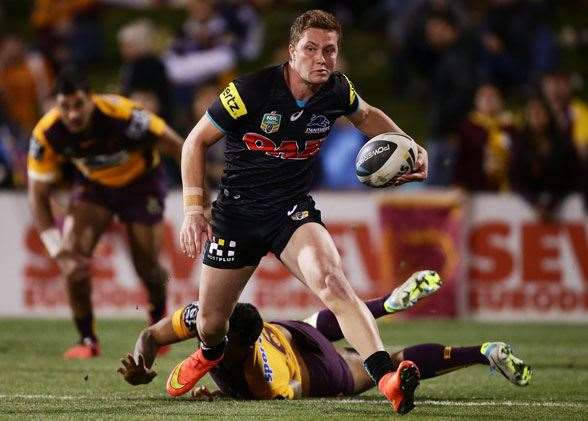 Will Matt Moylan lead the Panthers to the promise land? Or will Wayne Bennett and his men be just too good! (Photos by Getty Images)

When these two sides meet in Round 20, a couple of weeks after Origin III, both should return to their full compliment with the likes of Boyd, Thaiday, Hunt, Moylan, Mansour and new Panthers recruit Zak Hardaker all set to play, an intriguing battle looms. A loss for either side could be extremely detrimental to their chances of playing a part in the finals series, especially with anyone inside the top 12 a realistic chance at playing finals footy, losing these key battle with the teams around you could spell season end for one of these two sides.

A potential do-or-die show down for both of these sides in two very different ways. For the visiting side, a loss in this encounter could potentially end their 2016 season. The lead-up to this fixture pits the Dragons against two sides just outside the top eight (West Tigers & Titans) and should they come away with less than a 100% record from those games, their rivalry with the Bulldogs will be taken to a whole other level come July 29. 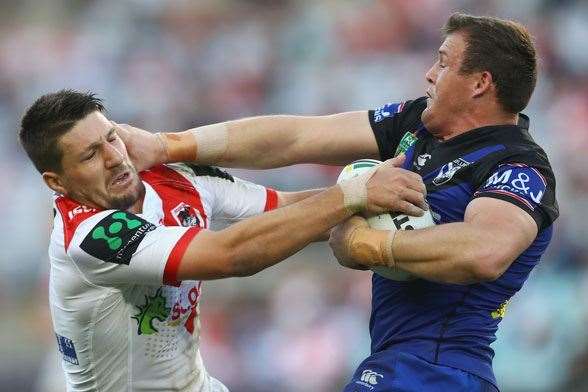 Do or die clash will bring out the best from these tow sides. (Photo by Getty Images)

Whilst nothing would satisfy the Bulldogs faithful more than potentially ending the Dragons season in July, cementing a top four spot would sweeten a win in this fixture. The Bulldogs will have to back up from playing the Tigers and the Cowboys with a bye sandwiched between the two before the take on the Dragons. If they can manage to get positive results this could cement a top four position and the all-important double chance in the finals.

Just 24 hours after the Bulldogs and Dragons do battle in Sydney, Rugby League fans north of the border will be treated to another potentially season defining match with both these sides having aspirations of winning the JJ Giltinan Shield as Minor-Premiers. This season-defining game could end one team’s hopes of claiming that title. 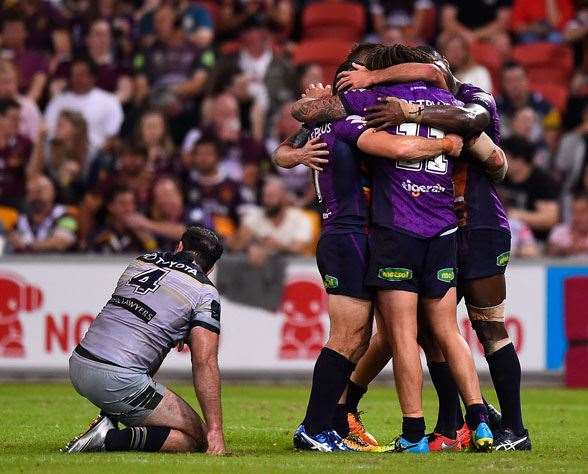 Storm players celebrate their 1 point victory in Round 10, a repeat results in Round 21 and it could signal the end of the Cowboys minor premiership hopes. (Photo by Getty Images)

Melbourne will be hoping to repeat their victory they had over the Cowboys in Round 15, although they would be eager to win in much more easier circumstances after a dramatic 15-14 victory at AAMI Park back in May. Should the Melbourne side win this fixture, it would potentially be a two-horse race for the minor premiership between the Storm and the Sharks. A loss for the Cowboys could also see them fall out of the top four, depending on other results, leaving their finals destiny not in their own hands.

However, a reverse of what transpired in Round 15 could see the Cowboys firmly enter the race and with five games remaining and from what we have already seen, anything is possible.

The Parramatta Eels have without doubt been the talk of the sporting world and the butt of everyone’s jokes since the season began. Incident after incident, drama after drama, the whole situation that is going on at the Eels is playing out like a bad soap opera. But what’s a soap opera without a dramatic finish. Cancel all your plans for August 21 because this day could either signal the end or just the start of the Eels season. 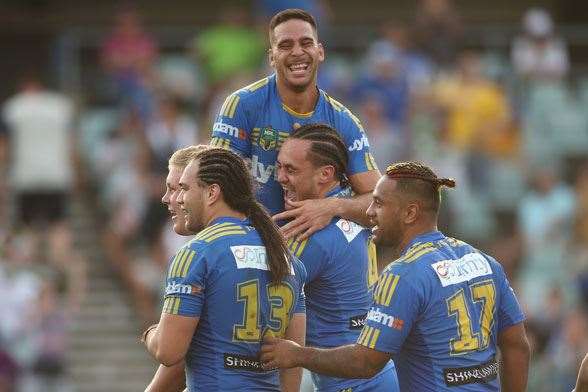 Despite his side soon to be stripped of 12 competition points, can Corey Norman lead his men to the finals series against all odds? (Photo by Getty Images)

The talk is, the Eels will be stripped of their points shortly after Origin ceases. The Eels would then have to win almost every game from (potentially) round 19 onwards. If they manage, then a showdown with former coach Ricky Stuart and his Raiders chargers would ultimately define the Eels 2016 season.

However, it could also be a game that defines the Raiders season, with the Canberra club pushing for a top eight spot and a chance to play finals football after the heartache of just missing out last season, this clash looms as a must watch.

Talk about a soap opera esque ending if there was to be one. No doubt the power brokers at the NRL are licking their lips in anticipation and hope that this fixture, in the final round of the regular season, decides who will claim top spot.

Shane Flanagan's side are in unstoppable form and continue week after week to prove – if any more evidence is needed– that this Sharks side are genuine premiership contenders and at this stage favourites to go all the way. Yet, you can never count out a Storm side with the experience they possess that’s the envy of the league. 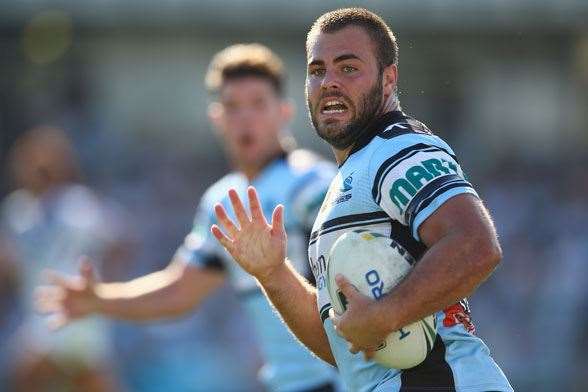 Can Wade Graham and the Sharks go all the way? (Photo by Getty Images)

Despite the game being in Melbourne, you sense this clash has an Origin feel, especially seeing once again, on opposite ends the NSW and Queensland captains (Paul Gallen & Cameron Smith) going toe-to-toe in a high pressure situation.

Come round 26 the Minor Premiership could already be wrapped up, given the Sharks have an ‘easier’ run home compared to their opponents, however dead-rubber or title decider, finals football will come one week early for both of these sides.

All about the Quad Crown series on the NSW Sapphire Coast