Putting you in complete control of your ride.

According to the Bossi website: “The Pilot puts you in the cockpit with complete control over the roads. Whether you are on a daily commute or weekend sprint the race-derived compact frame geometry, with aero-profiled tubing makes Pilot soar over the streets.  Carbon forks provide better steering response and feedback whilst reducing weight. Powerful disc brakes give all-weather ability and mounting points for racks, mudguards and panniers maintain its functionality and utility in all conditions. Pilot: fast enough to compete, strong enough to commute.”

Based on the above, the Pilot fits neatly into the ‘all-rounder’ category of road bike, sharing the space with the Giant Contend, Norco Valence, Specialized Allez and Merida Scultura (alloy). This bike category has evolved over the years, offering entry-level bikes which combine speed, comfort and control suited to variable road and weather conditions. The inclusion of pannier mounts, disc brakes, and the ability to run 28mm (and occasionally wider tyres on some brands) adds further versatility to these already capable bikes. 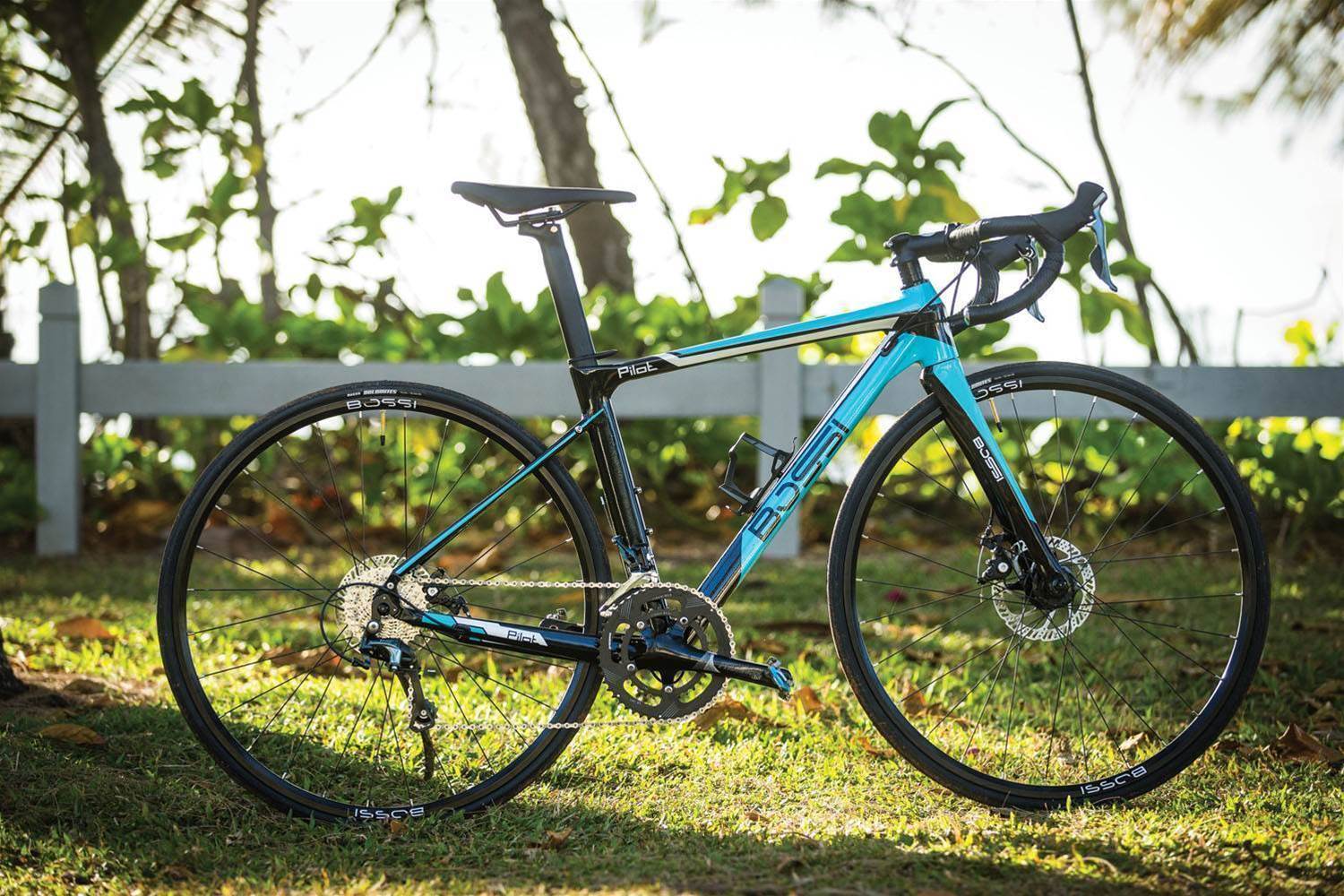 Out of the box and assembled, the Pilot is a fast-looking machine. Its ghost weld finish and aero-profiled tubing do well to create an exotic carbon fibre appearance, disguising its true hydroformed alloy composition.  Only upon closer inspection of the rear triangle and bottom bracket can one pick out the neat welds, concealed beneath gloss black paint.

Having owned many blue bikes myself (and being one of my favourite colours), I was instantly attracted to the gloss blue, gloss black, pearlescent white paintwork combination on the Pilot. The straight lines and clean angles of the frame and fork are further highlighted by its razor sharp linear graphics. I don’t doubt that James Bossi personally applied his extensive design expertise to this bike.

All gear and brake cables are neatly routed internally, including the front disc brake cable through the carbon fork, further adding to the aesthetics and aerodynamics of the bike. With its aero alloy seat post and integrated clamp, the Pilot casts a sleek shadow. Like most modern aero road bikes (e.g. Propel, Reacto, Venge) the rear triangle is lowered so the seat stays meet the seat tube below the top tube. This frame design not only makes the bike look fast, but adds to the stiffness of the rear end.

Keeping with the aero theme, the Bossi branded alloy wheelset revolves around a 32mm aero rim laced to six-bolt (disc) FastAce hubs, held together by 28 stainless steel j-bend spokes and alloy nipples. With wider tyres now the standard, I was extremely pleased to see a pair of reliable Maxxis Dolomite 700x25 all-rounders fitted (albeit their lower-end wire bead versions).

The Pilot comes with rear mounting points for racks, mudguards and panniers. I never got to utilise these features, but a quick look at their Facebook page offered photos of a fully-laden Pilot touring Slovenia (Instagram @ambikasethia) – though the fork looks to be a non-stock option.  So, proof does exist of the Pilot’s potential.

At approximately 10.17kg the Pilot isn’t going to win you any KOMs. However, considering its aerodynamics and cable disc brakes, this figure is no surprise and fits within the range expected (with most rim-brakes equivalent machines coming in between 9-9.5kg). Being a numbers guy, I did spend a little too much time studying the geometry of the Pilot from the Bossi website. With most figures closely resembling the Giant Defy (top tube, seat tube, chain stays, head angle and reach), I was intrigued to see a slack seat tube angle of 71.5 degrees (most bikes within this category fall between 73-74 degrees). The head tube length of the Pilot was also short at 120mm (a small Giant TCR is 133mm). The Pilot also had a higher than usual stack height (557mm) and longer than expected wheelbase (997mm). Remembering the added functionality of running panniers on this bike did put these numbers into perspective, but at what cost to the everyday riding experience?

Every bike in my garage (and every bike before it) can be associated with an experience. Looking at the Pilot parked neatly between my personal collection I kept thinking of one thing… rain! Every time I ventured out on the Pilot the heavens would invariably open up. Stock standard, the small Pilot fitted my towering 167cm climbers’ frame nicely. With the seat height set, and the short stem secured with a very upright 30mm of spacers under it, I was off to ride my favourite 30km undulating test loop on 80psi.

Rolling down the road the stiffness of the frame was immediately apparent. The profiled rims, tight rear triangle, aero frame and seatpost, all translated to a very lively feel. The carbon fork did little to quieten the noise felt through the faux carbon bar tape adorning the alloy handlebars. It was this “direct” feel that made me believe I was going faster than my Garmin indicated. A few quick pedal strokes and we rocketed away.

Right on cue, rain began to fall 3km into my ride (the point of no return). Love them or hate them, disc brakes offer far better braking in all weather conditions. During my entire wet test period I was very grateful for their improved stopping ability. While I’m more familiar with the hydraulic variety, I found the Tektro cable disc brakes to be more than up to the task on long, wet and winding descents. They do lack the modulation and raw power of hydraulics, but the confidence they instil had me convinced of their added weight and place on the Pilot. Climbing out of the saddle caused the front rotor to rub slightly on several occasions, something through-axles help eliminate.

I also approved of the wider 42cm handlebar on the small frame. This addition may not suit everybody, but it does offer increased stability and improved handling. It also fits perfectly with its globe-trotting, bike-touring utility. The soft and narrow Bossi-branded contour saddle proved comfortable and was soon forgotten during testing (a very positive sign).

Introduced in 2016, Shimano’s Tiagra 4700 group set was an instant pleaser providing high-end technology and aesthetics to entry-level bikes. Equipped with Tiagra shifters, derailleurs and cassette, the drivetrain was completed with a Prowheel Light 621 Compact (50/34T) crankset and a KMC chain, all of which meshed together for reasonably operation. Unfortunately for the Pilot, the flexible (unbranded) outer shifter housing supplied returned a firm and sluggish feel to the Tiagra shifters (I gave the cable routing the benefit of the doubt).

Given my ongoing damp and slippery riding conditions, I wasn’t confident enough to fully push the Pilot through tight corners at high speed and test its mixed geometry. However, from the everyday riding I did undertake (in real-world conditions), its relaxed rear and extra wheelbase did not create an imbalance or compromise in seating position or handling, providing a very stable and predictable ride.

At $1,250 the Bossi Pilot rates highly amongst other bikes within its price and spec range. Its aero profile and accompanying graphics make it stand out further from the bunch, especially considering the inclusion of cable disc brakes. There is no question, however, that these attractive characteristics result in a very stiff ride. To improve all-day comfort one could do several things; replace the bar tape with something more forgiving, fit 28mm folding tyres, or reduce tyre pressure further.

The internally routed cables did return considerable chatter within the alloy frame - a quick and easy fix for any bike mechanic or garage tinkerer. On the topic of cables, I highly recommend replacing the gear shifter housing with a genuine Shimano product to restore the positive shifting I know the Tiagra levers provide.

Overall, the Bossi Pilot provides a suitable cockpit from which to tackle your daily commute to work or a weekend of social riding or racing. With its versatile frame mounting options and room for wider tyres, the Pilot can also transform into a multi-day, touring rig, leaving its competitors waiting quietly in the garage for their next ride.