We caught up with the man who was the symbol of footballing hardness.

As a symbol of footballing hardness – and pugilistic prowess – few compare with Barry Hall. He captained a premiership side, made four All-Australian teams and was kind-of referenced by a future Prime Minister in one of the most notable political quotes of the era. But for all his considerable career accomplishments, Hall can’t avoid being remembered for his other moments: the Maguire incident, the Thompson incident and, most notably, the punch on Brent Staker in 2008. Since his retirement in 2011, and subsequent transition to Fox Footy commentator, Hall has offered an interesting perspective on his career and the changing nature of toughness in modern footy.

At the start of the season, we had the Jack Viney bump and the resulting outcry about physicality being taken out of the game. But later in the year, we had the Vickery, Conca and Lake incidents almost reminding us how rough the sport can be. Do you think footy has an identity crisis in regard to its physical side?

I think in terms of rules and interpretations, players are pretty confused about what they can do and what they can’t. Not in terms of black and white – if you hit the head, obviously you’re going to go for something. It’s just a matter of how far. Some blokes get a week for something, then someone gets three weeks for a similar incident. I think players realise now if you choose to bump and make head-high contact, you’re going to go. They know that now, and that was a bit of a grey area for a while. Now it’s just a matter of the penalty, and getting that consistent. 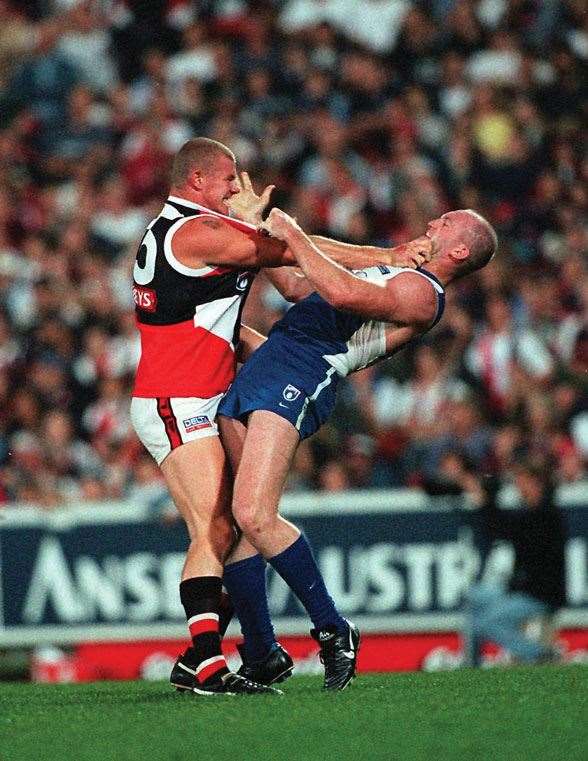 Michael Martyn and Bazza wish each other all the best for the year ahead in the 1998 preseason. (Photo by Getty images)

Are players frustrated by this, and is this a cause of incidents?

Without asking them too much, I think players are frustrated with it a little bit. You see a Nat Fyfe go into a contest – it was a fair bump, he’s not a nasty player, he’s just a hard player – and he’s ineligible to win the Brownlow for that incident. It’s just ridiculous, it really is. That’s the part where, we play a contact sport, that happens sometimes. I think every player, if you asked them, would say exactly the same thing. They’d be happy to cop a head-high knock if it was accidental. I don’t think that’s been an issue from day dot. I understand what the AFL is trying to do, but I think they’ve gone too far.

Through the time you’ve played footy, we’ve seen an incredible evolution of the game. Is it inevitable it is going to evolve in the direction of being less physical?

They want a quick, fast game, which is what we’ve got at the moment. But if it’s going to take away that physical aspect – and whether we like it or not, the rules are in, so we’ve got to deal with it – I don’t like it. It’s one of the most physical games ... we have a unique sport, and it’s just detracting from the game a little bit. We obviously see the high marks, and there are a lot of good things about our game, and one of the good things was the bump. To take that away is a real shame.

How much was the physical side of the game an attraction for you?

Yeah, definitely, we don’t see it too much nowadays. But you’d almost expect to cop a bit of a whack after you get rid of the footy, or put your head over the ball. It was just part of it. We’ve seen a lot of incidents, particularly in other sports, but nothing dangerous. You’d expect a really hard bump. Same as a marking contest. You would almost expect to get a whack from behind, that was just part of it back then. Unfortunately, that’s gone.

You mentioned in an interview last year that fans would come up to you and talk about how they relished things like the Brent Staker incident, and how uneasy that made you feel. How has your perspective shifted from your time as a player?

The game’s changed a hell of a lot, and my perspective has changed as well. Being an ex-player going into the media, I still see the game as really physical. There’s some rules I don’t like. But, geez, I’d hate to play the game now. We talk about physicality and how much these guys run. You talk about the toughness of a game, there’s no tougher challenge than a mental challenge. The way these guys put their bodies through vigorous amounts of stress. It’s probably not as physical in terms of bumps and all those sorts of things, but in terms of the mental challenge, it’s right up there. 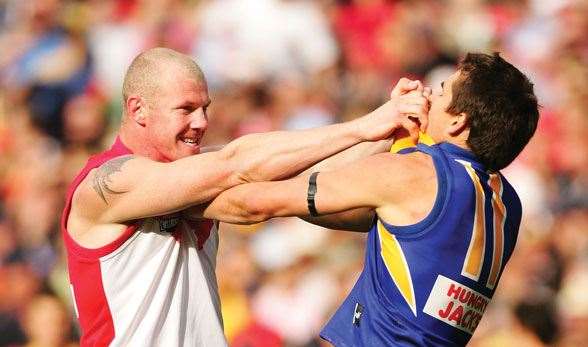 Dancing with the Eagles' Travis Gaspar in 2005. (Photo by Getty Images)

The other interesting thing you said was, as tough as bringing up the incident is, it’s tougher on Staker. What did you mean by it?

The incident, I wish it didn’t happen. At that stage, I didn’t care; I was just caught in the moment, it was a split-second thing. But now, the after-effects of it, when you get more mature and you finish football, Brent Staker has to live through it ... He’s going to have to live with it for the rest of his life. It’s going to be played. Unfortunately, I can’t do anything to change that. That’s the thing that bothers me.

There were stories this year on Peter Caven, on the 20th anniversary since the incident with Tony Lockett. Both Caven and Staker, like most footy players, look back on their incidents and accept it as part of the game. It’s part of being a pro, right, but it also enables the situation.

By them saying that, it’s almost like an accepted part of the game. But it’s not. It’s almost the Australian way, to suck it up and get on with it. I’d probably be the same if I was on the receiving end: let’s get on with it. We don’t want it to be part of our game, because we have kids who play and look up to players, and you don’t want to see them emulate it. It’s not part of our game.

You get tough guys both on and off the field, and then the white-line types. Do you have a view of the tough personality type?

It’s interesting, I went up and spoke to some of the GWS players, the younger forwards. I have a friend who is helping to develop those young kids. He got me up there because, on-field, I was a bit of a mongrel. I was very competitive, I hated everyone, but as soon as I would get off, I would be joking around. These young kids, they are super-talented, but they’re all nice sort of kids. There’s no sort of mongrel in them yet; they’ll grow into that. That white-line fever ... I used to go out and make it a mental challenge, straight out. Go to my opponent and make sure he knew he was in for a day. I’d know, as soon as I was in his head, I’d won the battle. It was all just bullshit push-and-shove; I’d get in their face and intimidate them. That’s all it was; I didn’t have to whack anyone or do anything stupid. It was just a challenge of: I’ve got this bloke and he knows his place. So I went up to GWS and told them about that, and much as it’s ego and all that, it helps you one or two percent. They certainly took that on board. I told them that I was different to you kids at the same age. I had a bit of a chip on my shoulder ...

Was it really evident that they were the product of a different footy culture?

Definitely. Some of the looks I got when I was talking about this stuff – hating your opponent and that sort of thing – they were interesting [laughs]. The question was asked: can you see yourself doing that? A lot of kids said, “Ah no.” That’s probably not in them, which is fair enough. We’re all different beasts.

How do you see this year’s top contenders ahead of the finals, with particular respect to their physical toughness?

You look at them, they’re all seasoned campaigners. Fremantle, Hawthorn, Sydney, Geelong, the top-four sides have a good mix between defence and attack, and they’re hard football sides. They’re good contested, they limit sides from being uncontested ... they’re all perfect for finals football, because it’s a lot more contested, a lot more congested. It’s no coincidence that the top four is all like that.

You won a grand final close and lost one close. Is the emotional feeling there tougher than anything else you physically went through in football?

Yeah, I didn’t like losing any game, let alone a grand final. We went through a lot of disappointment before the 2005 grand final. I guess, from the West Coast Eagles’ view, they could say the same as we could – they missed out just and won the next year. It would spur you on. Who knows? The disappointment of that is shattering. 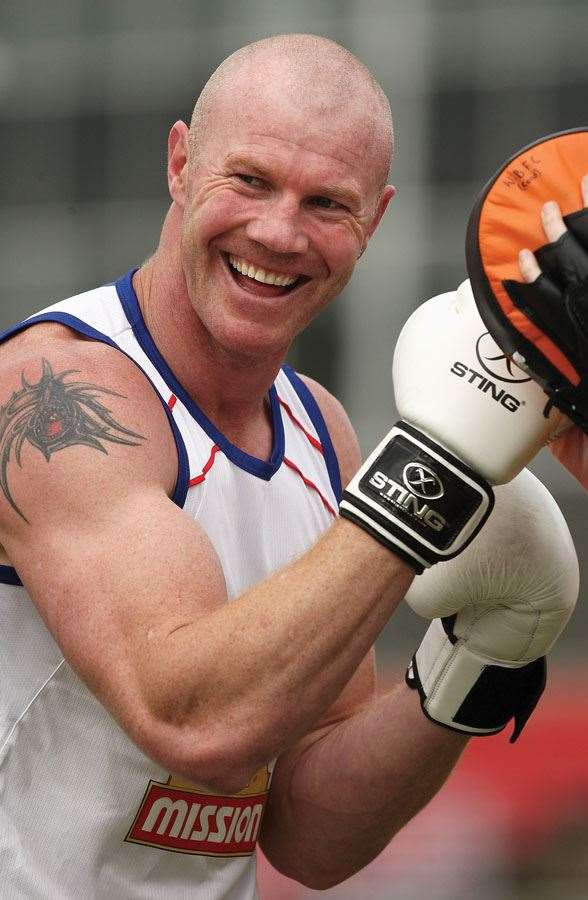 There would've been less "sting" if the gloves were left on in Barry's heyday. (Photo by Getty Images).