Rick Weber returned to Boston’s Fenway Park and found himself as charmed by The Green Monster as ever.

Rick Weber returned to Boston’s Fenway Park to impress his son, but found himself as charmed by The Green Monster as ever. 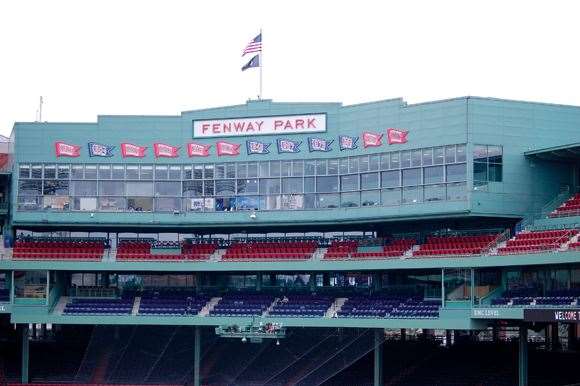 Greg The Tour Guide takes us past the red-brick facade with the sign proclaiming “America’s Most Beloved Ballpark”, then leads us into Gate A, through the dank bowels lined with mementoes of greatness, and up the steps.

He stops us dead in our tracks. “Before we go up through this tunnel, I want you to clear your mind,” he says. “If this is the first time you’re seeing this, take it all in. This is your wow moment. Because when you see it, you’ll go, ‘Wow.’”

The patch of light gets bigger as we move through the tunnel. As we emerge into the full light, there’s a simultaneous explosion of green ‒ the immaculate grass field backed by the iconic 11m-high wall, The Green Monster, probably the most famous feature of any sporting venue in America, including the ivy-covered walls of Chicago’s Wrigley Field.

I’ve been prepared for this, having been at Fenway Park on back-to-back nights in 1990 to see my beloved Boston Red Sox. What I’m interested in tonight is the reaction of my son, Austin, who had adopted the Sox as his own. He’s been talking about this moment for months.

He whips out his cell phone and, in awe-struck wonder, clicks from a number of different angles ‒ as if he were in the presence of a pink-splashed sunset over the Greek island of Santorini that would be fading within seconds.

Fenway Park has been compared to the Sistine Chapel, which might be an affront to the exquisite artistry of Michelangelo, but is a testament to the reverence afforded the park, quirkily jammed into the Fenway neighbourhood of Boston, between narrow streets that, legend has it, started out as cowpaths built on what had been a smelly mudflat.

Novelist/poet/literary critic John Updike, who spent most of his life in Massachusetts, described it as “a lyric little bandbox” and added that Fenway “represents a compromise between man’s Euclidian determinations and nature’s beguiling irregularities”. Orioles manager Buck Showalter, who cut his managerial teeth on many epic battles at Fenway while leading the villainous New York Yankees, said, “I don’t know anything about classical music, but if there is a baseball symphony, this is it.”

I don’t know which symphony Austin is hearing, but he’s hearing something, because he’s saying very little. Maybe we’re processing everything we’d experienced during a journey into the heart of baseball Americana. Just 72 hours earlier, we’d toured the National Baseball Hall of Fame in Cooperstown, a charming hamlet tucked into the rolling hills of southern New York state ‒ a place described by Doubleday Cafe T-shirts as “A drinking town with a baseball problem”. 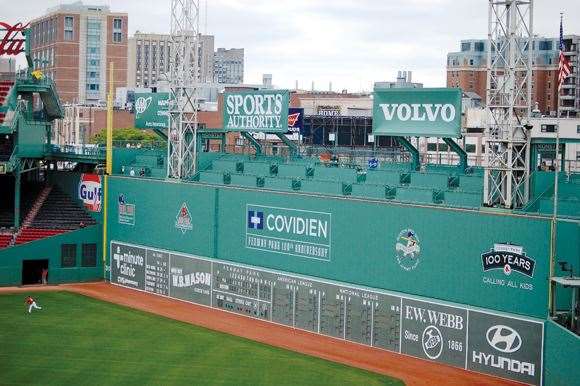 We’d toured the museum and marvelled at the exhibit honouring the 100th anniversary of Fenway, including The Bloody Sock ‒ the blood-stained sanitary hose worn by heroic Red Sox pitcher Curt Schilling in a Game Six victory over the Yankees in the 2004 American League Championship Series after undergoing a suture on a tendon in his right ankle.

Outside the museum, on Main Street, we’d even seen a stunning Babe Ruth lookalike ‒ wearing the Yankees jersey everyone associates with him and not the Red Sox strip he wore while winning three World Series for them before they unceremoniously shuffled him off to the Yankees for $125,000 in cash and three $25,000 notes payable every year at six per cent interest. Sox owner Harry Frazee was also loaned $300,000, with the mortgage on Fenway Park as collateral.

Fenway Park, which opened on April 20, 1912 ‒ five days after the Titanic met its watery grave in the North Atlantic Ocean ‒ almost didn’t make it to its 90th anniversary. The 1999 All-Star Game appeared to be the ballpark’s last great moment. The team had announced plans for a “new Fenway” which included tearing down most of the existing structure (leaving enough for a mini-museum) and building a new park next door. Only one problem: the team owned none of the land it would need.

The project was ditched in 2001 when CEO John Harrington sold the club to a group led by Liverpool FC magnate John Henry, who revered baseball traditions and cherished Fenway. Henry and CEO Larry Lucchino used the term “improvement” rather than “renovation” when they talked about their plans for Fenway, and they pumped millions into their baseball cathedral.

Their piece de resistance was the decision to add three rows of seats atop The Green Monster in 2003 ‒ seats that became the most coveted in all of baseball. How coveted? Even movie stars wanted to sit there instead of in a stuffy private box or behind the dugout. (Watching games on TV, I’d never really looked at The Monster seats quite like that. They seemed vertigo-inducing.) 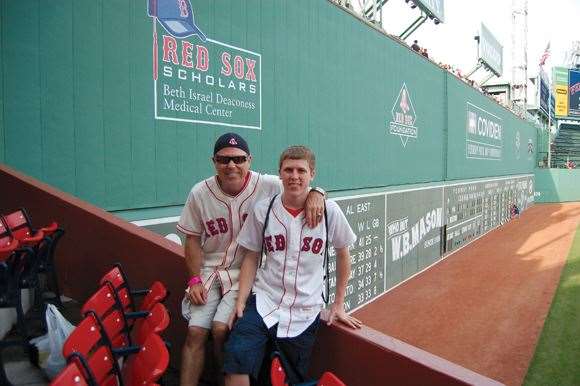 Your author and son Austin at baseball's "lyric little bandbox".

Greg The Tour Guide takes us up to the pristine precipice so we can get a look. And that’s when things get really weird. Austin and I, sitting in the front row, turn our backs to the field so a fellow tourist can snap a photo of us. Just seconds after he hands the camera back to me, I get whacked in the right shoulder blade by a wayward ball hit by a Red Sox coach. The ball ricochets to the top of The Monster, where a man scoops it up.

My shoulder hurts like heck. That ball would be a nice souvenir, but the new owner isn’t budging, even when I offer to buy it from him.

“It’s our 25th anniversary,” The Ball Dude says, nodding toward his wife.I wait for the punch line ... or any clarification of his cryptic comment. Nothing.

I’m too stupefied to say anything. Just keep walking and don’t make a scene.

Nothing is going to dampen this day ‒ not a pulsating shoulder or brain-dead dialogue from The Ball Dude. We hang out for another five minutes on The Monster, soaking in what Dan Shaughnessy, a long-time Boston sportswriter, once wrote: “Children remember The Green Monster the way they remember their first look at the Grand Canyon or the Golden Gate Bridge. Size matters. The Green Monster is impossible to ignore or forget. More than any quirky feature, The Wall has come to symbolise and encapsulate the Fenway experience.”

Not everybody gets “the Fenway experience” ‒ particularly visiting opposition players who are accustomed to dressing in palatial, luxuriously outfitted clubhouses.

Tampa Bay Rays outfielder Luke Scott sent Red Sox Nation into apoplexy in April when he called Fenway “a dump”. Though he later tried to clarify his statement ‒ saying “it’s a difficult place to get your work done” because of the cramped quarters ‒ the damage was done. To Red Sox Nation, Scott had gouged some chunks out of Michelangelo’s frescoes. What kind of crude clod would do that?

We don’t have Scott as a whipping boy as we settle into our sweet Row 23 seats for the game. We have the Miami Marlins, and they’re gracious visitors, going down meekly by a 7-5 score. We sing Neil Diamond’s Sweet Caroline in the eighth inning, punctuating it with chants of So good! So good! So good! We stand as Alfredo Aceves strikes out Hanley Ramirez to end the game. And then we celebrate a Fenway victory tradition ‒ the blaring of The Standells’ 1966 hit Dirty Water over the speakers. “Cause I love that dirty water ... Oh, Boston you’re my home.”

Pulitzer Prize-winning author David Halberstam once wrote, “You go to Fenway and you think, ‘Something wonderful is going to happen today.’” It did, Brother Halberstam. It did. 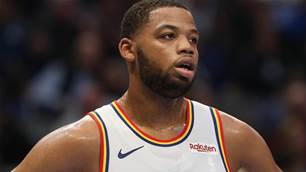 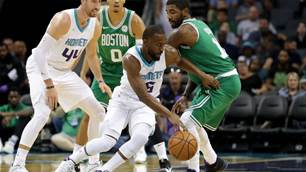 Are the Boston Celtics still contenders? 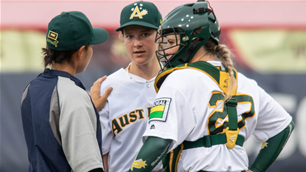 Women’s ABL on the agenda