Chris Green has signed the longest deal in BBL history to stay at the Sydney Thunder – but has still not given up on his ultimate dream.

The 26-year-old has been around the Thunder squad since BBL04 and was a member of the winning team in the following season.  Green is now a regular for the side and has been rewarded for his loyalty and consistent performances.

As a dedicated white-ball cricketer, Green plays around the world in franchise cricket. However, it is the BBL that Green enjoys the most.

“I’m biased, I love the BBL," he says. "For me, it was my first opportunity to play professional cricket, and the Thunder gave me that opportunity which I’m incredibly grateful for.

"I’ve really always loved playing in front of friends and family, so that adds that extra touch to it for me.”

Green’s experiences in the competition-winning season are not forgotten. In fact, he’s thankful of that and how it repaid the fans.

“The early days of the Thunder was pretty thin in terms of results, so being a part of that winning team in BBL05 and giving back to our loyal fans some reward for their tireless hours of support towards us was something that was really special to be a part,” he says.

Apart from the winning campaign, Thunder has not seen the finals. It is a poor return based on the personnel that the Thunder have had at their disposal.

Rather than gloss over the fact, it something that Green is prepared to recognise and use as a motivation for the season to come.

“There’s no hiding the fact that our performances – if you take out BBL05 and winning – haven’t been up to the standard or the goal that we set out," he admits.

"We come together every year that I’ve been a part of it and talk about winning the BBL and lifting that trophy, particularly for the guys that were part of BBL05 and want to get that feeling back.”

The loss of Shane Watson’s experience will be difficult to replace while Jos Buttler’s explosive batting will be missed. Fawad Ahmed and Kurtis Patterson have both headed west to the Scorchers. 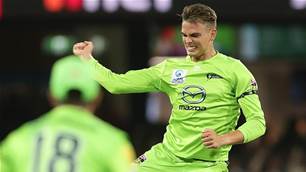