Drafted by the WNBA sight unseen, a WNBL champion, a work ethic second to none 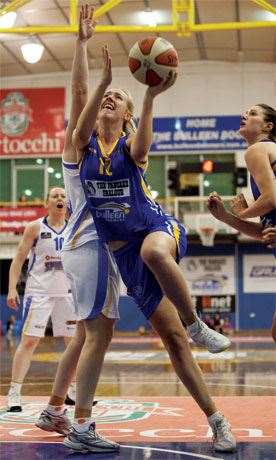 Drafted by the WNBA sight unseen, a WNBL champion, a work ethic second to none ‒ 20-year-old Rachel Jarry is going places. The talented small forward is set to be Australia’s X-factor as our women’s basketball team aims to go one better than Beijing and claim gold at the London Olympics.

Growing up in Melbourne’s western suburbs, Jarry has been around basketball her whole life. Idolising the likes of Lauren Jackson and Penny Taylor as a kid, she was formally introduced to the sport when her mother established her own club at Jarry’s school.

Representative honours at state level ensued from the age of 15, primarily as a post player. At 17 she received a scholarship from the AIS. Jarry made her WNBL debut for the AIS in the 2008-2009 season, where she averaged 10.5 points and 5.2 rebounds per game. She continued to rack up appearances for the Gems (Australia’s national under-19 side), leading the squad to fifth place at the FIBA Under-19 Women’s World Championships in Thailand. She decamped to join WNBL team Bulleen Boomers for the start of the 2009 season, and it was there she first came under the eye of Boomers coach and former Opals mentor Tom Maher.

Maher remembers it well: “She wasn’t a heralded player when she came to us ‒ we just got lucky. She blossomed into a player overnight. I’ve never seen anything like it.” That season Bulleen reached the grand final, falling to the Canberra Capitals 75-70. In March 2011, the Boomers avenged that loss, obliterating the Capitals in the decider 103-78. “She’s integral to our team; we’d be lost without her,” Maher says. “She’s one of our mainstays.”

Two weeks after that premiership, another milestone was reached when Jarry was selected in the Opals squad. A fortnight later, the 19-year-old received an even bigger honour – selection with the 18th pick in the WNBA draft despite no scout having seen her play. Jarry only discovered she’d been drafted on Twitter: “I wasn’t expecting it at all,” she says. “I couldn’t believe it. It was so surreal.”

Jarry has set her sights on tackling the WNBA in 2013, with the London Olympics her immediate goal. “I’m doing everything I possibly can to make the team. It’s going to be tough ‒ it depends on the make-up they want. I want to be a long-time player for Australia; to play in multiple Olympics and World Championships.”

Maher is certain Jarry has what it takes to make the London squad. “I’d be flabbergasted if she didn’t. She can go physically with the US players. If her body holds up, she’ll have a long-term career with Australia.”

Jarry’s game has developed with age, growing from an inside-only player to a threat behind the three-point line. Her ability to improve herself and to mix it on both sides of the paint makes her a versatile and unpredictable opponent. “Rachel can rebound, she can defend,” says Maher. “Last year I told her that

she needed to become a better passer, and she has. She’s a really good three-point shooter. Coast-to-coast, she’s probably the fastest player in Australia. There’s no skill deficiency in her.”

She might have speed and skills, but at 183cm, Jarry also has the size to throw herself about. The Melbourne product enjoys the tough stuff and has always looked up to fellow Australian small forward Penny Taylor. “I love getting to the basket,” she says. “Penny’s been amazing her whole life. I haven’t modelled my game on Penny’s, but we’re very similar. She’s a role model.” Maher sees clear similarities between the veteran Opals and Phoenix star, and Jarry. “Rachel’s a good listener, she’s an intelligent player, she picks things up. A terrific defender at such a young age. She plays hard.”

Maher’s belief that Jarry is up there with the best young talents in Australian women’s basketball is shared by his wife Robyn. A former Opals captain and an icon of Australian basketball, she sees Jarry as someone who has undeniably earned her plane ticket to London. “Her ball-handling has improved greatly in the last six to ten months,” she says. “She’s an all-round player; she could play the one [point guard] if she had to. She’s a definite Opal.”