The NBA All Star reserves were named earlier this week. These always create contention, and who doesn't love a bit of controversy! In that spirit, let's name my All Star Reserves for 2020.

Jokic's poor start to the season is perhaps the only reason as to why he's not in the conversation for a starting berth in the All Star game. After a genuinely worrying November, regular service has been restored with Jokic giving the Nuggets a nightly 23 and 10, with close to 55/40/80 shooting splits. As Jokic has warmed up, so has his team's offense. At the start of December, Denver ranked 19th in points per 100 possessions – they're 6th since then. Jokic is this teams offense – they're 3rd in the NBA with him on the floor, 22nd when he sits. Despite his heavy-footed reputation, Jokic is an excellent defender. He's rarely out of position, plays his angles wonderfully and has incredible hands. That allows him to snag rebounds and swipe steals that other centres simply cant.

For the first time since Carlos Boozer and Mehmet Okur in 2007, the Jazz are sending multiple players to an All Star game (admit it, you thought it was going to be since Stockton and Malone). Both Rudy Gobert and Donovan Mitchell are worthy recipients of their 1st All Star appearances. Gobert has doubled down on his defensive prowess, throwing out a pair of shots per game, and snaring a career high 14.5 rebounds. He looks a certainty to win his 3rd Defensive Player of the Year award. Gobert is also vital to the Jazz's offense, creating space for his shooters as an elite roll man. Yes, he needs his play makers to set him up, but the Frenchman's ability to finish at the rim creates a Sophie's Choice for the defense: stay with the shooters and give Gobert an automatic deuce, or crash the paint and let Ingles, Clarkson, Conley or Bogdanovic fire away. He and Mitchell dovetail wonderfully. The attention Gobert draws opens up the slivers of space that a lightning fast and slithery ball handler (11th in the NBA in drives) like Mitchell thrives upon. In his 3rd season, Mitchell continues to grow, averaging career highs in points, rebounds, assists and all of his shooting percentages. The Jazz made a conscious offense-for-defense choice this offseason. Mitchell and Gobert have the Jazz sitting in the top 10 at that end of the floor – it's fair to say the decision has paid off, so far.

Chris Paul, in his age 34 season, continues to shine. There has been a lot of chatter that he's playing in a diminished role in OKC. The New Car Sheen of Shai Gilgeous-Alexander has surely contributed to that. Don't make the mistake, however, of thinking that the Thunder are not Chris Paul's team. The veteran is the man that makes this surprising side tick. His 17.1 points per game is actually up on his scoring last season in Houston, and he remains completely clutch, easily leading the NBA in FG% in the last five minutes of games. He has lost a step on defense, but he remains excellent. His hands are still elite, as is his positioning and anticipation. He's also strong as an ox, which helps offset his short stature and diminishing foot speed.

Brandon Ingram deserves his inaugural All Star berth. He's been the one constant in a whirlwind of a season in New Orleans. Considering that he's moved to a new team, dealt with the Zion hype-injury-hype roller coaster, a constant stream of health related lineup changes and the inevitable growing pains that any young team will encounter, Ingram has been fantastic. It goes without saying that he's achieving career highs across the board. However, a worrying trend for Ingram is that his scoring has dropped by about 6 points per game, from around 5 less shots, since Zion Williamson's return. Luckily for Ingram, the All Star game takes into account the first half of a season – 25 points, 6 rebounds, 5 assists and close to a steal and block per game are more than enough.

The final spot on the official roster has gone to Russell Westbrook. That's OK. I guess. Westbrook's scoring has increased from his last season on OKC from 22.9 to 26.5 points per game and – as expected – his efficiency has jumped considerably playing alongside the defense magnet that is James Harden. That jump brings Brodie up to 52.6% true shooting – still the single worst figure of any player who is in contention for an All Star berth. He's shooting a woeful 23.6% from deep. His defensive rating is at it's lowest since his rookie campaign. In a crowded field, Westbrook isn't a deserving All Star this time around. 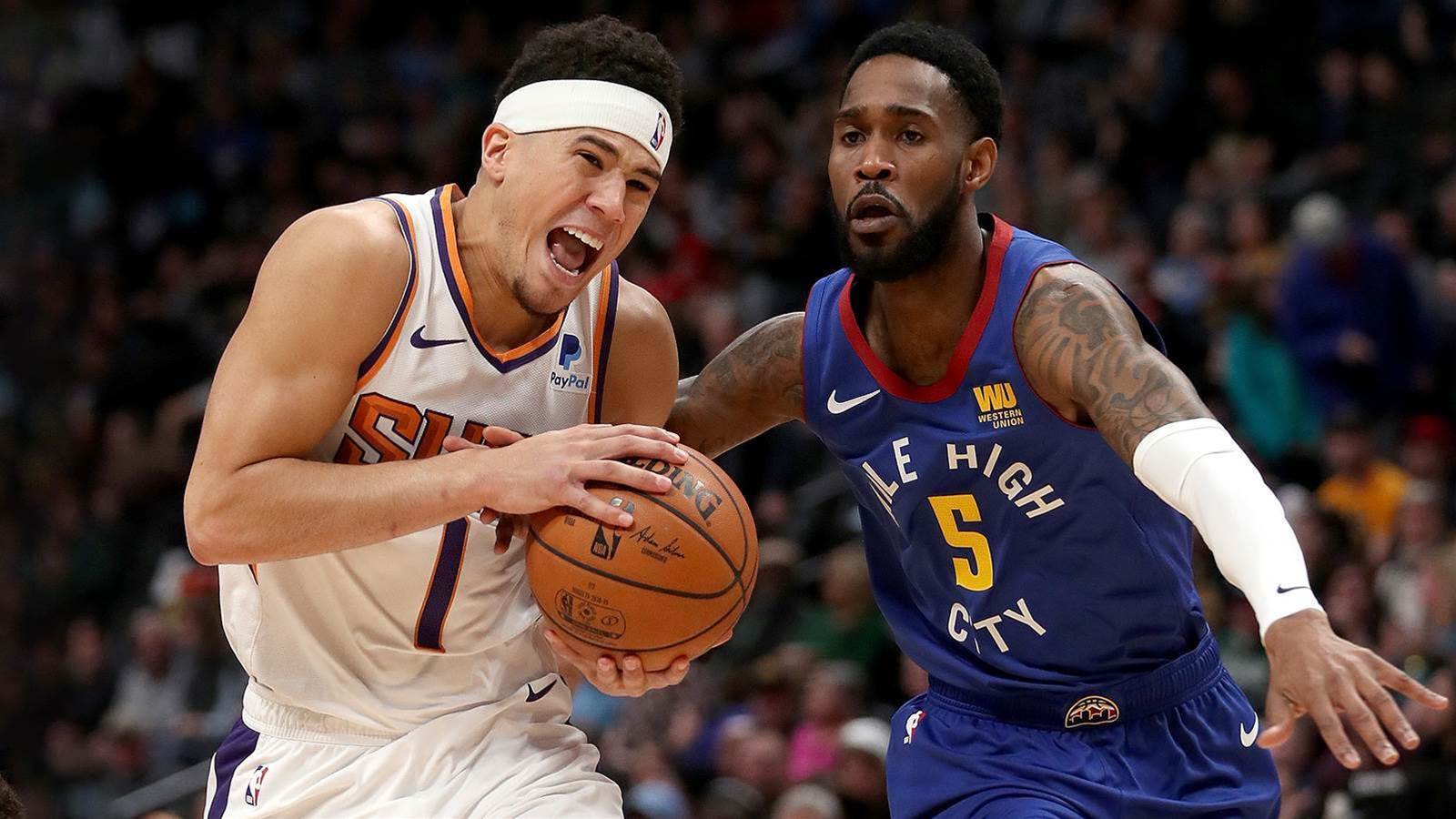 My final spot goes to Devin Booker. The 5th year Sun is averaging 27.1 points per game, and has maintained his 6+ assists per game from last season, despite Ricky Rubio's addition taking the ball out of Booker's hands. Having Rubio as a teammate can't be underestimated when assessing Booker's improvements this season. He is now combining his best version of James Harden with the ball, as a heliocentric offensive fulcrum (he's developed great chemistry with DeAndre Ayton), and channelling his best Ray Allen when sharing the floor with Rubio, darting around screens for catch and shoot opportunities, or attacking a scrambled defense.

Booker's scoring ability draws inevitable double teams and traps; his passing out of those has improved immeasurably this season – maybe he'll begrudgingly admit that his preseason work paid off. His defense is....not great, but it's improved from the deplorable levels of the past few seasons. Booker is in.

As is customary, the Western Conference contains a lot of 'nearly but not quite' stories, and that's still the case despite Curry, Thompson and Durant not being eligible this season.

Westbrook was close, but he has found his best form too late. It's a similar case for Spurs pair DeMar DeRozan and LaMarcus Aldridge, who have both been on a tear since mid January. As good as their recent form is, you can't overlook their tepid performances across the first 30 to 35 games this season. There was some Shai Gilgeous-Alexander buzz, but he's the 2nd best player on a low end playoff team – he's not getting a berth.

Karl Anthony Towns and Paul George are the two most high profile omissions, but they've simply missed too much time to be seriously considered. PG would be a lock otherwise, and Towns All World offense eclipses his atrocious defense. If he'd played enough games, there would be a spot for him, here. Who would I leave out for them, if they had remained healthy? Probably Booker and Ingram.

So there we have it.

Inside Sports Western Conference All Stars:

Finally a quick comment on the NBA's alterations to the actual All Star game itself.

The Sunday showcase of All Star weekend has become somewhat unwatchable over the past few years. I sat down and watched the 1988 All Star game earlier this week. The pace was slower, there was less flash, fewer dunks....but at least it looked like actual basketball. The lack of competitiveness – culminating in Jimmy Butler getting the first DNP in All Star history - in recent games has been demoralising to watch. When you assemble the best talent in the world on a single court, you want to see them take it to each other. At least for a little while.

The biggest hurdle in achieving this was the 'how': the players earn tens of millions per year, so money won't change anything. And they can't risk injury because of that earning capacity. So the NBA has done the one thing that might get the players to put in an effort. Some might call it professional pride, but in assigning $500k prize money for charitable donations, I'd say the NBA is attempting to shame its players into making at least a token effort.

Will it work? Time will tell.