Tomane strikes but Speight in strife as the Brumbies roll on.

We are down to the final four after an epic weekend of finals action. Starting on Saturday night, the Highlanders booked their place in the semi-finals, defeating the Chiefs in a breath-taking encounter in Dunedin. The game was played at a frantic pace, producing some flamboyant rugby as well as bone-rattling defence that at times threatened to boil over. However, two tries to Waisake Naholo was enough for the Highlanders to get past the Chiefs 24-14 and secure a semi-final showdown with the NSW Waratahs.

In the early hours of Sunday morning, the Brumbies produced an amazing display of tough, hard rugby, ousting South African conference champions the Stormers 39-19 in Cape Town. The Brumbies out-scored their opponents six tries to one, with winger Joe Tomane bagging a hat-trick.

The only blemish on the Brumbies' performance  was a red card to winger Henry Speight.

The boys from the nation's capital, after journeying to back to Australia, now head to New Zealand for a showdown with the top-ranked Hurricanes in Wellington.

Check out the best pictures from the first week of finals action. 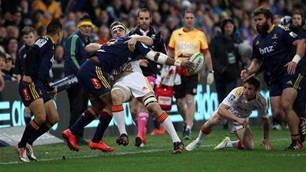