A comfortable win in Brisbane sees the Sixers move back to second place in the standings.

The win was an easy one against an opponent struggling to perform the basics. In contrast, the Sixers bowled and batted well to set themselves on course to secure second place. Brisbane Heat’s season continues to slump with their fifth home loss of BBL09.

Having been put into bat, Brisbane Heat were soon in trouble when Chris Lynn fell early. The Heat captain misread a Steve O’Keefe arm ball and was bowled for 7. Things got worse for the Heat when they suffered a now all too familiar batting collapse. Matt Renshaw’s wicket, from scoop shot straight to the fielder, was the start of three wickets for five runs for the Heat to fall to 4/38. Marnus Labuschagne’s return to the Heat line-up was not a successful one as he was out for just three runs.

Although batting was not easy due to tight bowling from the Sixers, poor shot selection was the main driver for another poor batting performance. AB de Villiers built up his innings in a restricted manner while James Peirson and Ben Cutting kept him company.  When the South African did try to find the stands, he could only pick out the fielder on the boundary to fall for 25. The fielder in question was Steve Smith who was playing his first BBL game since 2014.

Mitchell Swepson followed soon after to leave Heat on 8/93 and in danger of being bowled out for an embarrassing total for the third time this season. However, James Pattinson demonstrated to his batting colleagues that maybe it was easier to bat than thought. His 27 from 15 balls pushed the score up to 126 to post a better total than expected but still woefully short of a competitive score.

Brisbane was in dire need of wickets early, but James Vince was in an irresistible mood. The Englishman took on the Heat bowlers, with Mujeeb struggling to contain, to reach his fifty in 34 balls. With a large score at his disposal, Vince flicked a ball towards deep square, and Sam Heazlett took a good catch. The departing Vince headed back to the bench with a look of disbelief on his face.

The fall of Vince gave Brisbane no respite as Steve Smith was the next man in. He departed for nine, edging James Pattinson behind, but Josh Philippe was more than adequate to see his team home. The Sixers wicketkeeper helped himself to an unbeaten half-century as the Sydney side won at a canter by eight wickets.

The win pushed the Sixers back above the Strikers as the race for second place, and two chances to qualify for the final, hots up. With just one home game left against Melbourne Renegades and a two-point lead, the pressure is on Adelaide to win their remaining games. Strikers face a match in Perth tomorrow night before travelling back east to play the Hurricanes on Sunday.

Brisbane Heat’s finals prospects are looking grim. Although it’s mathematically possible to finish either fourth or fifth, their form suggests otherwise. Looking clueless with the bat and toothless with the ball, coach Darren Lehmann needs a massive turnaround in form. He looked a forlorn figure at times during the game as his team offered up another abject performance. 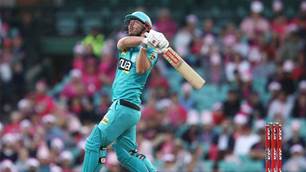 'We can't go backward': W-League must be included in TV deal