One of the world's most popular exercise aids started out as punishment for convicts.

OF ALL THE INNOVATIONS designed to increase the fitness of the layman and the elite sportsperson alike, the humble treadmill is still the most commonly used across the board.

It is believed the concept of a human leg- powered device to serve as a sort of winch, or crane, was first devised by the Romans when the empire was at its height and construction was central to its prosperity.

English farmers in the 1800s adopted and adapted the idea to run “level power” machines that normally relied on fickle nature to provide wind or water power. Often with animals as the power source, butter was being churned, cream separated, grains harvested, stones ground and mills fanned at a much greater rate than before. Dogs and sheep were used to power the smaller machines, while the larger gadgets, like threshing machines, were powered by horses.

It was at this time that the term “horse-power” ‒ the unit of measurement of the force needed to operate one of the new machines ‒ was invented. The calculation was based on the pulling power of the average draft horse. A person-driven treadmill could replicate that power.

The concept, then-called the treadwheel or “everlasting staircase”, was modified for other, non-industrial uses, by prison reformer and engineer William Cubitt in 1817 as a way of preventing prison inmates from becoming idle and returning to the devil’s work. Their efforts were sometimes put to use for grinding corn and pumping water. Sometimes more than 40 convicts would be running on the treadwheel, walking up steps connected to a five-metre-long hollow cylinder.

It took a while for anyone to wake up to the possibility that this ingenious device could be used for any purpose other than punishment or production. In 1952, however, two doctors from Washington University, Robert Bruce and Wayne Quinton, used an updated version to test the heart-lung capacities of patients.

Bruce became known as the father of “exercise cardiology”, and his “Bruce protocol”, which tested cardiac patients with exercise (the accepted wisdom was that people with heart conditions rest) became popular in the medical profession and is still used today.

In 1968, Dr Kenneth Cooper noted that people using treadmills for such research were actually becoming healthier and fitter. In other words, the diagnostic tool became the solution to the very condition it helped diagnose. So, he reasoned, it would also prevent that condition ... Why couldn’t anybody use it?

Enter Bill Staub. (You’ve got to love engineers. Where would sport, in all its aspects, be without them?) Staub, a fastidious and health-conscious fellow himself, was a mechanical engineer who took up the challenge of affordable equipment, based on the ideas in Cooper’s revolutionary new book, Aerobics – a concept Cooper, a great innovator in his own right, introduced to the world. Staub read Aerobics and was taken with the observation that people who ran one mile for eight minutes, four-to-five times a week, would be healthier than most of the population. According to Bill’s son, Gerald, Staub believed more people would run if he managed to remove the usual excuses: bad weather, straying too far from home and having to get back, not wanting to go outdoors, the high impact of running on a road, etc.

The relationship immediately had synergies. Staub sent Cooper his prototype, complete with 40 steel rollers, a belt, a motor with a cover and dials for adjusting speed. Cooper was immediately able to get sales via his own referral networks. Cooper’s company, Aerobics Inc, cranked up for full-scale production of what became known as PaceMaster treadmills.

It was the fitness world’s equivalent of the personal computer. Suddenly, the average person no longer needed to make the choice between going for a run or staying in and watching TV or listening to the radio. They could do both! As time went on, convenient music via audio tapes, CDs and now the iPod made the experience even more of a pampered one.

The modern treadmill is a technological extravaganza. Thanks to Arthur C. Clarke, who came up with the idea for the running-wheel-type treadmill seen on 2001: A Space Odyssey, NASA has adopted them for use on Skylab. Star Trac invented the first treadmill to exchange workout data with Palm OS handhelds. This, in turn, opened up new vistas for the average person: tailored workout regimes, downloadable programs, self-assessment possibilities.

Life Fitness has taken convenience to a whole new level, introducing, in 1991, the FlexDeck Shock Absorption System, which reduces stress on the joints by 30 per cent. They were also responsible for the introduction of the first integrated LCD touch-screen console and attachable LCD screen on a treadmill. Later, they developed the first cardio products with iPod and USB connectivity.

The modern treadmill might never replicate the friction, wind resistance and variable terrain of an outdoor run, but if certain concepts take hold, we will soon see the omnidirectional treadmill, which will allow the user to change direction and move in any way they please. Soon after, this will impact on the video game, and even the couch-bound gamer might quickly become a thing of the past!

Probably the most far-ranging effect of the development of the treadmill has been the development of other “endless path” concepts, like elliptical machines and resistance pools ‒ anything that allows moving without travelling. This wonderful invention has put fitness and health within reach of people who might never have got moving otherwise.

In 2012, Bill Staub, described by Cooper as “a pioneer in exercise − not for the athlete, but for the masses”, died at 96. Two weeks before he died, he was seen doing what he loved: going for a run on his state-of-the-art treadmill. 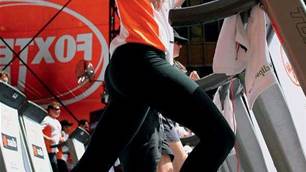