Catch all the action at Centennial Parklands.

Red Bull Billy Cart Sydney 2015 will be held on November 15 at Centennial Parklands, Sydney and is a FREE PUBLIC EVENT!

Sixty teams from all corners of Australia will descend on Sydney's Centennial Parklands for a day full of action and hilarity.

Crazy, colourful and outrageous hand-built carts will be put to the ultimate test, competing on a purpose-built track consisting of ramps and obstacles and fighting for a cut of the $35,000 prizemoney on offer.

As V8 Supercars legends Jamie Whincup and recent Bathurst champion Craig Lowndes discuss in the exclusive preview video above, the Centennial Parklands track will be 800m long. A Supercars-style chicane at the start will be followed by a mid-course burm. The drivers then face a choice for the final obstacle: another chicane ... or a jump!

Unlike in other billy cart events you may have heard of or seen, at Red Bull Billy Cart Sydney 2015 there'll be other ways for teams to earn kudos rather than just crossing the line in the fastest time.

A judging panel lead by motocross stunt rider Robbie Maddison and off-road motorcycle racer Toby Price will also be keeping a lookout for the teams with the most personality, creativity, showmanship and overall razzle-dazzle.

Celebrities will also get a chance to take on the track. Nova 96.9’s Fitzy & Wippa breakfast team will be the first off the blocks in their very own purpose-built carts - "Mr Wippa’s Ice-cream Cart" and "Fitzy’s Funny Car".

Fans of all ages are welcome to be part of a day that will be jam-packed full of excitement and laughter. 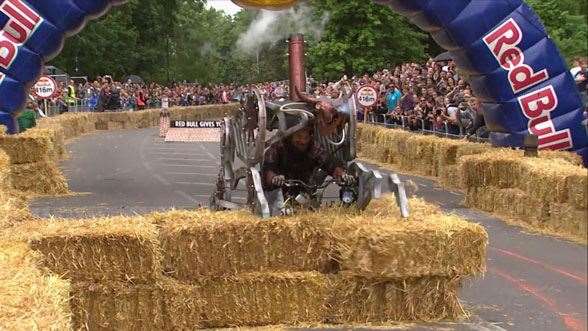 Obstacles add to the fun and excitement.