The “father of bodybuilding” required no pharmaceutical assistance to shape his amazing physique. And he would amaze audiences as much today as he did over a century ago. 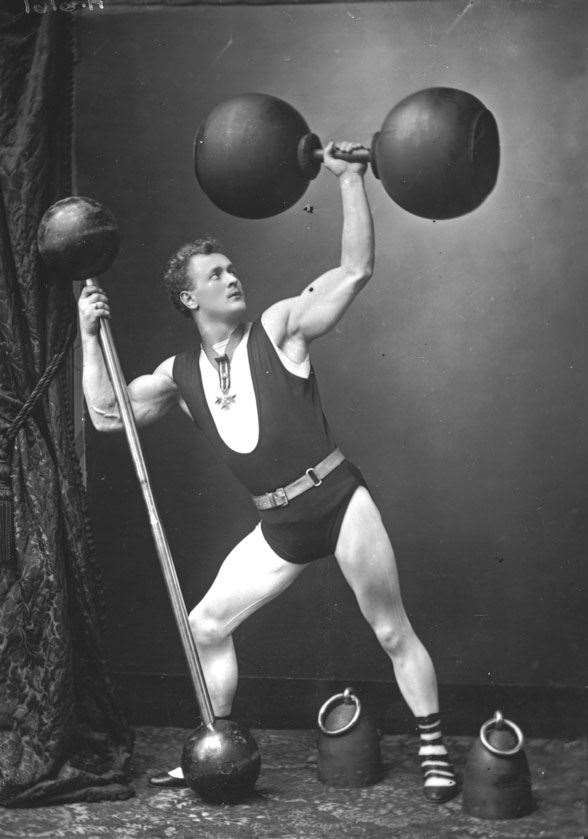 In the middle of the 19th century, the realms of strength, health and bodily aesthetics all came together. This new world even had its own Adam, complete with fig leaf. His name was Eugen Sandow.

At that time in history, a man like Sandow, whose body could throw up mountain ranges of delts, traps and biceps, escarpments of abs and pecs, columns of quadriceps and calves, all at the slightest twitch, was a true wonder. That in itself was unprecedented, at least in the modern world; such ideal proportions were witnessed only in the statues of the renaissance masters, and paintings. But Sandow went further. His pretty-boy, almost “unmanly” features compounded the cognitive dissonance everyone already experienced upon witnessing his brawny form.

Born Friedrich Wilhelm Muller in East Prussia, he changed his name to avoid compulsory military service. Sandow has always been dubbed the “father” of modern bodybuilding. But the perfection of his physique relied on genetics and an intelligent approach. No doubt he aimed for perfect symmetry, but aesthetics were secondary to strength and health. Sandow was probably more strength athlete than bodybuilder. He took part in a strongman contest in London at 21, and beat the reigning champion easily. He achieved victories over champion wrestlers as well, in the days when wrestling was solely an authentic sporting pursuit.

It was showman Florenz Ziegfeld who first noticed that audiences were more intrigued by Sandow’s bulging musculature than his ability to lift heavy weights. The muscle pose was invented and formalised, usually based on figures from classical art. Sandow would execute his “muscle display performances”, as Ziegfeld called them, and later added novelty acts for the “wow” factor, like breaking chains around his chest and lifting horses.

Women and men paid money just to feel his muscles. The theatricality of it all, quite apart from the strength, was the original model for today’s bodybuilding industry.

In 1894, Sandow was considered extraordinary enough to be included in the first moving picture exhibition in history – a record of amazing things the Earth and its inhabitants had to offer, fit to show proudly to any alien who needed a crash course – in scratchy black-and-white.

As is often the case with most physically extraordinary people, Sandow was a scholar of physical development, and as with many of them, he delved into ancient Greece, and the “gymnasium”, studying its methods. He’d visit museums for his own, very specific, reasons. The poses of great art would become the basis of his routines and photo sessions, and he’d imitate them, reclining, stretching, contrapposto, most of the time – for the photos, at least – wearing his trademark Roman sandals and a fig leaf.

He’d also measure the proportions of these art works, planning to prove that these physical ideals were not merely static, or fictional, but could be embodied by a real human; that they were humanly achievable. The “Grecian Ideal”, as he called it, was, to him, the perfect physique.

Sandow took to inventing apparatus for physical development, going beyond the dead weights that were the current trend. These novel devices included weights with spring grips that targeted wrist strength, and rubber bands for stretching exercises.

In the last years of the 19th century, Sandow started the first of his Institutes of Physical Culture. There, he taught diet, exercise and weight training. Through the sheer example of his own physical prowess and presence, his revolutionary ideas soon became popular among men. He also began the first “physical culture” magazine. All this was perfectly in tune with the zeitgeist. “Muscular Christianity” was all the rage at England’s schools, and the prowess of men and the importance of the “masculine ideal” were promoted to motivate men to work harder to feed their families, which had become more crucial than ever since the Industrial Revolution, and to defend their country against (as yet) unspecified enemies. He also authored a series of books, in one of which Sandow actually coined the term “body-buildingThe “father of bodybuilding” required no pharmaceutical assistance to shape his amazing physique. And he would amaze audiences as much today as he did over a century ago.

It was as far back as 1901 that Sandow organised the first exhibition featuring muscle posing. One of the judges was a famous sculptor, which gives some indication of the “artistic” emphasis this new pursuit had. The other was the author, Arthur Conan Doyle. The third was Sandow himself.

Famous artists such as James Joyce and William Butler Yeats, two of Ireland’s greatest, were attracted to his system, as were many well-known musicians and painters. Scientific though it was, it appealed to the artistic sensibility. Rather than being squared off into little corners of the universe as bodybuilding and strength sports are now, this world, with Sandow in its midst, was an olio of ingredients from all walks of life.

Sandow’s legacy was enormously significant. His statistics were so impressive, even today bodybuilders are amazed that he achieved the size he did without the assistance of their little pharmaceutical helpers. His thighs were as big as those of today’s best bodybuilders, and his biceps were almost 50cm-round. Even today, Sandow’s famous “eight pack” is almost unattainable, even by the most dedicated gym rat. His definition was outstanding by any standards.

On top of all that, he retained flexibility most of today’s steroid-enhanced bodybuilders couldn’t dream of, and often incorporated stunts like standing backflips into his routines. Static bulk was never his aim, rather it was practical strength, and another of our great innovators, Bruce Lee, became a disciple of Sandow more than half a century on. Lee’s great library of books included all of Sandow’s writings, and much of Lee’s muscular development can be attributed to the corpus of knowledge Sandow left behind. Hence Lee, despite his smallish size (Sandow himself was not a large man, and part of his audience appeal was that he looked relatively unremarkable fully-clothed ) was admired not just by martial artists, but also by elite bodybuilders, such as Lou Ferrigno.

Eugen Sandow died of a cerebral haemorrhage or the side-effects of venereal disease, depending on which account you believe. He was only 58. Many of his copious writings were lost forever. Though he recorded many of his thoughts and observations, and left them for posterity, his wife, bitter about his infidelities, burned the lot. But his work is carried on and celebrated in the many “industries” that sprang from his Herculean labours.