There had been a powerful feeling that a breakthrough was soon coming for gay people in professional sports. And with the NBA’s Jason Collins revealing his homosexuality today, becoming the first active player in one of the US’ major pro sports to come out, the response to the news has been significant in itself. It’s proof yet that sports can be one of the most effective drivers of social change.

While the moment may have been expected, even overdue – we’ve seen athletes from Martina Navratilova to Gareth Thomas already step forward – it’s interesting to see how Collins’ announcement shapes discussion of the issue. Observers have already noted that there could be few better spokespeople for a cause than Collins: a well-spoken, Stanford-educated, 12-year veteran who has played for six different teams and pretty much knows everybody in the league. He’s widely regarded as a consummate pro and great example to younger team-mates, a guy often signed to teams for that very reason.

Collins’ announcement has brought on praise, but more interesting has been the so-what reaction. While it might seem like blind-eye indifference (and in some cases might be), it’s also the particular way the sports adapt to social change. Our games are certainly not immune to wider forces, but they do have a way of bypassing them over the course of wins and losses.

Collins’ case calls to mind that of Ian Roberts in rugby league. Incredibly, the former Souths and Manly star came out 18 years ago, way ahead of the curve in gay rights and sports. Roberts’ situation was exceptional – a fearsome figure on the field not to be trifled with, he was well-suited to be a standard-bearer for his cause. But what was enlightening then was how supportive the macho world of rugby league was for Roberts. What seemed like a taboo was dispelled rather quickly. And while Roberts’ step wasn’t quite followed by others, it does seem like a different time for Jason Collins and those who will follow him. Breakthrough moments can turn into the new normal quickly. 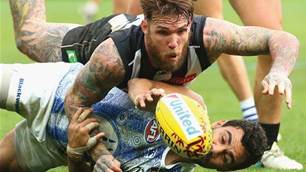