A classic was served up on New Year’s Eve, but Rashid Khan’s batting heroics proved to be in vain.

Sydney Thunder’s three-run win takes them to the top of the table. Both Usman Khawaja and Callum Ferguson hit half-centuries for Thunder as they notched up their third win in the competition.

Last year’s champions Melbourne Renegades are still winless with the Strikers winning at Marvel Stadium last Sunday. Despite the array of talent available, the Renegades have been underwhelming so far. New coach Michael Klinger will hope that the new year brings some luck to his side because they need something to change their momentum.

In a rain-affected clash at UTAS Stadium in Launceston, the Melbourne Stars beat the rain and home team Hobart Hurricanes. Despite a nasty blow to the head, Marcus Stoinis’ 25 made sure that the Stars were ahead of the DLS rate when rains finally ended the contest. 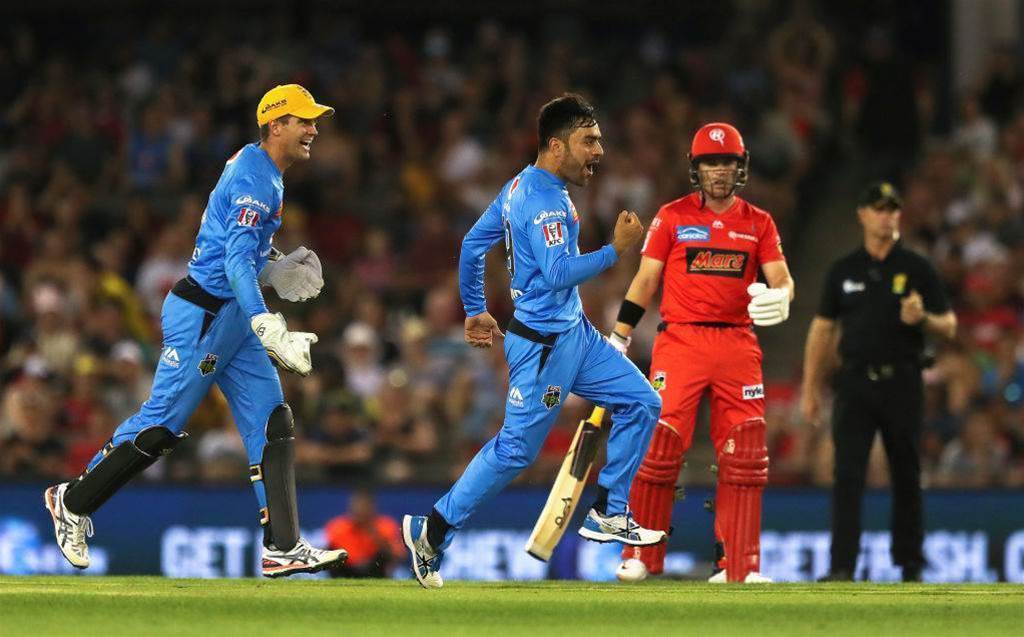 At Marvel Stadium, Phil Salt finally showed why the Strikers signed the big-hitting Englishman with a quickfire 54 from 26 balls. When Jake Weatherald was first to go with the score on 47, he had managed just six of those runs. Salt’s onslaught included seven fours and a six before slapping Cameron Boyce’s googly back at him.

At 2/74, Alex Carey and Jonathan Wells combined to move the score on to 125. Carey’s careless slog of a Boyce full toss was caught in the deep. The outfield at Marvel Stadium was not conducive to boundaries along the ground as the curator had left the grass long. Rashid Khan came in and decided to go over the boundary with two sixes while Wells then Cameron White both perished trying to move the score on.

Renegades captain Aaron Finch resorted to using seven bowlers, with Boyce’s 2-18 being the pick, as the Strikers took the score along to 6/155. Kane Richardson took 4-33 but was the recipient of the Strikers’ lack of shot placement.

Desperately needing the win, the Renegades found that the Strikers were not in the mood to offer up bad balls to hit. Wes Agar deservedly picked up Sam Harper, for 11 from 14 balls, in his opening spell. With Finch and Shaun Marsh, any total would be gettable, so the Strikers were ecstatic when Rashid Khan broke the 50-run partnership in the 11th over. Marsh had not looked in top form and played all around a delivery and was bowled.

Finch motored onto his fifty from 38 balls before a gross misjudgement proved calamitous. Going for what was thought to be an easy run, Finch found that Rashid Khan’s ground fielding was smarter than expected and the direct hit left him short. Next ball, Marcus Harris tried to flick the accurate Agar over deep square leg but found the fielder instead. At the end of the over, Dan Christian repeated the mistake of his captain with Salt being the accurate fielder. The Renegades had lost three wickets in the 13th over to slip to 5/89.

With their best batters back in the sheds, it was Beau Webster left with the task of seeing his team home. However, the Strikers’ bowlers were able to close the game out. Rashid Khan ended with 2-15 and Agar with 2-20 to leave the Renegades short on 8/137. The result put the Strikers top of the standings whereas the BBL08 champions were anchored to the bottom with four straight defeats. 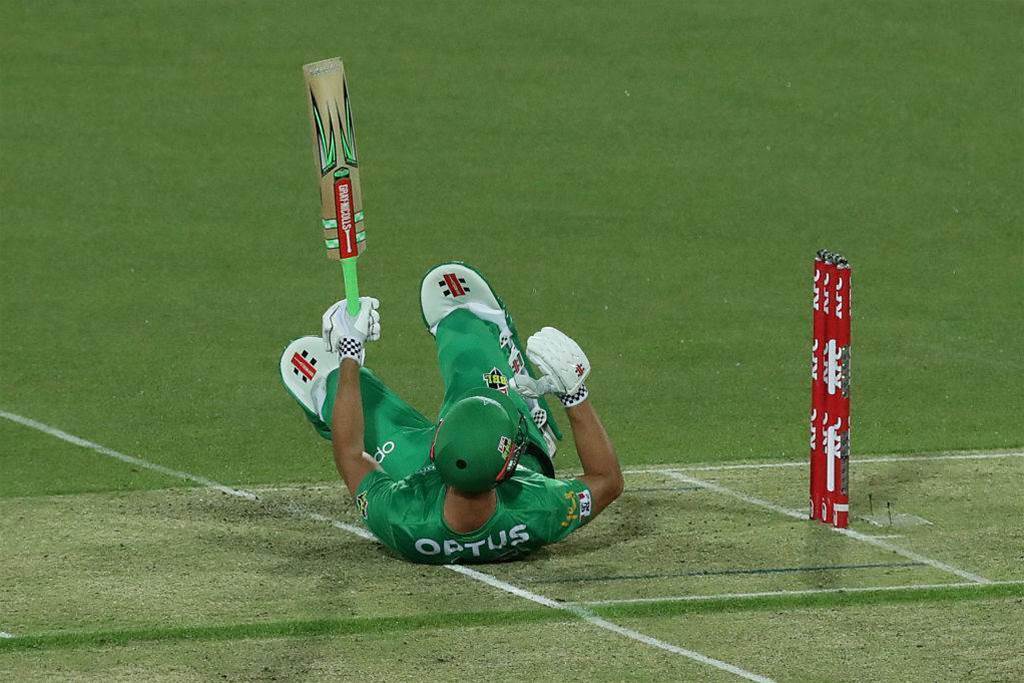 Put in to bat by the Stars, on a green pitch and imminent rain, the Hurricanes lost ace opener D’Arcy Short with just three balls gone in the match. Three rain delays would eventually limit the Hurricanes to only 11 overs. Caleb Jewell’s 26 being the pick with Simon Milenko adding 12 and Ben McDermott’s 17 under challenging conditions.

Nathan Coulter-Nile and Dale Steyn both picked up two wickets as the pitch appeared to get greasier after each rain delay. With Hurricanes posting 5/69, the DLS adjusted target for the Stars to chase was set at 80 from their 11 overs.

James Faulkner’s opening over gave the Hurricanes a glimpse of an opportunity. Having conceded three runs off the first four balls; first, he trapped Maddinson in front before repeating the feat with the next ball with Nick Larkin being adjudged in front.

Things could have been much worse for the Stars, and particularly Marcus Stoinis when a Riley Meredith delivery struck the opener in the head. Stoinis tried to take evasive action as a short-pitched delivery skidded on but only managed to duck into the ball. It was a sickening thud into Stoinis’ helmet grill but luckily no other damage. The Stars’ opener bravely batted on after passing a test as part of the concussion protocol.

The opener fell, to Meredith, for 25 from 19 balls but the hard work had been done. When the rain came again to end the contest, the Stars were ahead of the DLS target were awarded the win. 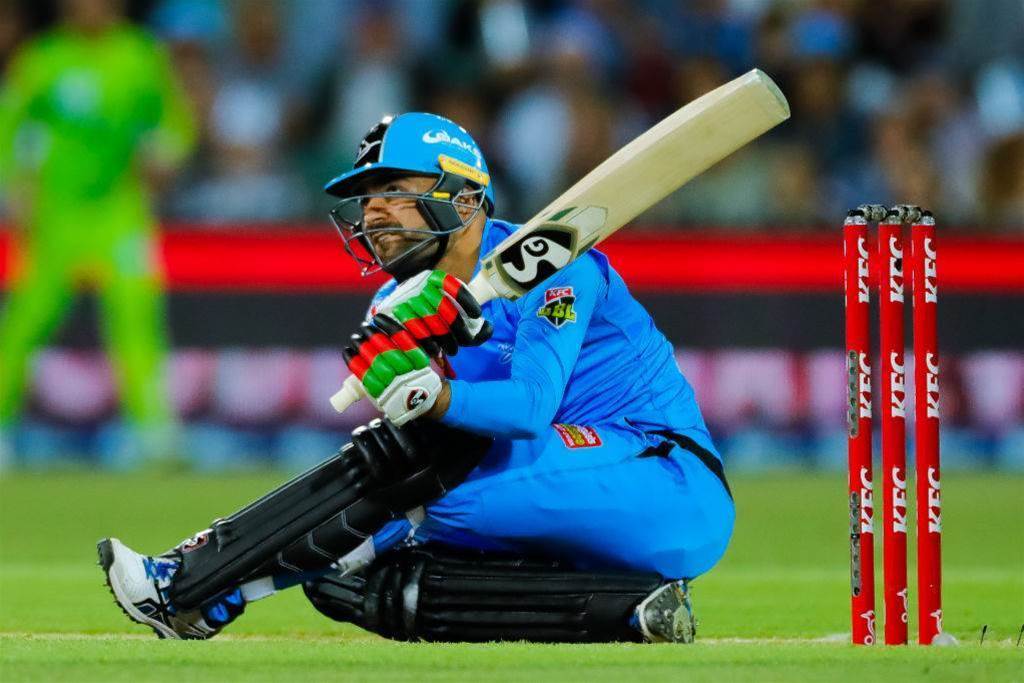 The partnership yielded 71 runs and had it not been for a piece of inspired Peter Siddle fielding then it would have been far more. Khawaja wanted a single, but Ferguson saw the danger and set the opener back. Wes Agar’s throw to Siddle was quick, and the bowler’s automatic arm flick back towards the stumps was accurate and Khawaja was gone for an excellent 63.

Rashid Khan proved to be less economical than usual, with Ferguson depositing him into the stands for two sixes, before finally getting the Thunder captain. Going for a third maximum off Khan, Ferguson found Jonathan Wells at deep midwicket. However, his 73 from 46 balls had helped the Strikers to a good total. Siddle claimed two late wickets as the Thunder posted 5/168.

The weight of winning six New Year’s Eve matches in a row was evident when Salt then Short fell early. By the time Alex Carey nicked Chris Morris behind, the Strikers had fallen to 3/36. Jake Weathereld and Jonathan Wells were able to consolidate the innings before both falling within the space of four balls to arrest the innings.

Weathereld fell first, finding Chris Green in the deep, for 52 from 37 balls before Wells’ was superbly caught by Alex Ross. With a significant required run rate required, the Strikers lost both Camerons, Valente and White, to slip to 7/118.

Enter Rashid Khan. Having not performed with the ball, he was in no mood to fail with the bat. In the 17th over, Khan smashed Green for a six over deep midwicket. In the 18th over, Morris was treated to similar treatment. The penultimate over saw Khan go 4,6,4 to leave the Strikers needing 14 from Morris’s last over.

Siddle got off strike with the first ball before a dot ball moved momentum back to the Thunder. Balls three and four both went to the boundary to leave just five runs off the last two balls. However, the miracle was not to occur as Rashid Khan’s desperation to get back on strike for the last ball resulted in a run-out. Agar was run out off the last ball to leave the Strikers agonisingly short in a game that should have been over far earlier.