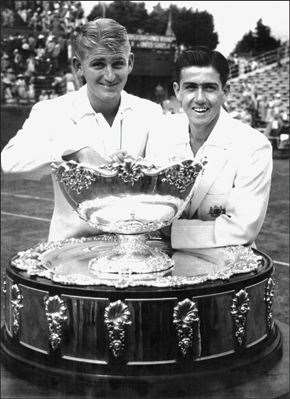 Rosewall and Lew Hoad enjoy the spoils of Davis Cup victory in 1953 over the US. Image: Getty Images

You’re well-known for the classy sportsmanship you displayed. Did you ever break a racquet in frustration?

We’ve all had our moments, yeah. Some of the racquets were a little less strong than some of them today ...

I can’t imagine that John McEnroe was the first hothead to come along ...

Well, before John, there was Pancho Gonzales, who was very much his own man; he had a lot of disputes with umpires and linespeople. He was a difficult character in the tennis world – Pancho was a great player, and certainly in my first years as a professional, I found him very difficult to play against, certainly on the fast, indoor-type courts in America.

Well, gamesmanship to some degree. When he’d get mad, I could lose my momentum or concentration and then he’d come out and play better. I’m not saying he did that deliberately, but that’s the way it worked.

Ever employ that tactic yourself?

No, not really. I was taught by my }father to just get on with the game – you could challenge the linesperson to see if they’d like to change their call, but if they wouldn’t, well, you’d just have to try and get on with it.

You must’ve seen some howling bad calls go against you on some critical points in some big matches. What was the worst call that ever went against you?

Anytime you lost a match, you felt like you got a lot of bad calls. Maybe it was because of me or my attitude, but I think I had my share of good luck with calls.

Do you watch much tennis on television these days?

I pick my matches. I enjoy watching Roger Federer because I think he’s been fantastic for the game both on and off the court; if any young player wanted to have an idol, he’s the man. When you think of what he’s done over a long period of time ... I mean, Roger’s 31 now, maybe 32, and his performances have been good for years. He’s still very hard to beat, and he’s been at the top of the game more or less for ten years. His record is fantastic.

Any women players you make a point of watching?

Well, you can’t go past the Williams sisters – they’re just unbelievable. Their record of what they’ve done – not just in the United States, but around the world. They’re head and shoulders above most of the other women players. Some of them have caught up, but on her day Serena Williams just seems to be so much stronger than the other players at the moment. From an Australian point of view, there’s a bit of pressure on Samantha Stosur, but she doesn’t have as good a technique and overall game as someone like Serena Williams. On her day, Samantha can be good – she is a very aggressive type of player ...

She admits she struggles with home town nerves a bit ...

Yeah, well, some people are like that. I think maybe I went through a little bit of that. In the ’54 Davis Cup, we played in front of a record 25,000 people at White City. For both Lew (Hoad) and I, that was our home town and our home club, friends and family were all watching, and I think I was a little bit overawed that particular day. Lew and I were both very disappointed in the way we played that first day when we lost our singles.

But you didn’t take yourself off to see a shrink the next day?

If you had a chance to sit with Samantha, is there any sort of advice you’d offer her?

Well, you’ve really just got to encourage the players. I don’t think there’s anything specific. I mean, she’s ranked highly, but there’s still a lot of girls who think they can beat Samantha because they know some days she’s not as good as she is some other days. She’s either on or a bit off.