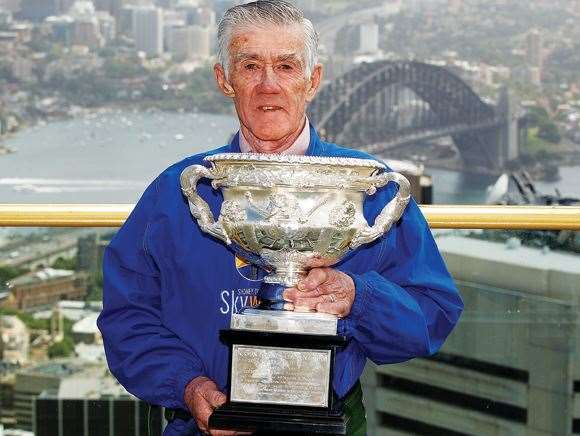 A new biography, Muscles: The Story Of Ken Rosewall, recounts in fine detail the story of an exceptional player, and a damn decent human being. Now 78, Ken took time out to chat at his Sydney home with Inside Sport about all things tennis.

Is there any advice you’d like to give Bernard Tomic?

I think he realises himself – he’s smart enough now ... I suppose he’s only 20 and has got a lot of years ahead of him, but he’s got a lot of work ahead of him. I think if he can get in the process of a better relationship with tennis people, like Lleyton and Patrick Rafter, I think it’s got to help him a lot. But there is a lot of depth in men’s tennis, and all of a sudden Bernard is realising he’s not in that category day in and day out, and that’s why his record has been rather disappointing this last six months or so. But I think Bernard realises he’s got a lot of physical work to do – I mean, he’s not really a good mover around the court. His game is a little bit different to other players, but he’s still got enough talent to improve a lot more and have a much better record.

What do you think of the shrieking and grunting that emanates from so many of the top players today? Should there be a law against it? I think an occasional grunt or something like that is alright, but not a continuous screech. Some of the men are making some of the noise as well, but not as much as some of the ladies. But I don’t know whether they can do much about it – they might try to. A few years ago you might remember Monica Seles went through turmoil when they were trying to get her because supposedly she was making a lot of noise, but not compared to some of the girls of today. Whether they can introduce some kind of limit ...

If you’re watching an Aussie Open final and two gals are testing out your eardrums, it takes away your enjoyment of the match as a spectator, doesn’t it?

Well, I think so. Especially if the match is played indoors with the roof closed. I’ve lost count of the number of people who’ve said to me that if they’re watching on television they just turn the volume down.

The new technology on line calls? I think people have found that interesting. The players might not have liked it in the beginning, but they’ve adapted to it. The only thing, I suppose, is that it’s unfair for some of the players who don’t get on to the centre court or the number one court very much – if they’re outside and then all of a sudden they’re got to play a match inside, they might get a little bit overawed with that kind of situation. But most of the leading players have adapted to it fairly well.

You suggest in your book that you don’t think someone of your physical stature would cut it in the modern game. Isn’t that a shame about the way tennis has gone?

I don’t think so. But personally, I don’t think I’d be big enough today. Certainly I’d need a lot more physical work to be a bit more muscley. It just seems that with the surfaces they play on, more often than not the balls are bouncing higher, so therefore you’re seeing a lot of shots played at shoulder height. That’s why the two-handed shot on the backhand side is pretty much a dominant shot and you have to use that ... There are a few exceptions, and Roger Federer is one of those. But you have to be an exceptional talent to have a one-handed backhand today.

But you had a famous one of those ...

Yeah, but one of my weaknesses was any shot above the shoulder – either forehand or backhand. And certainly with the older wooden racquet you couldn’t create the power on that high-type shot. In the early days the two-handed shot wasn’t accepted; when my father was talking to me about how I should play, he said, “Well, maybe you should be a one-handed player – you’re giving up a bit of reach being a two-handed player.” Though we had some of the great two-handed players. My idol was John Bromwich in the early days.

Do you think it’s a bit of a shame that some of the subtlety and finesse has given way to the power game?

Yeah, I think you’re seeing too much of the same thing. Once again, you can’t deny the ability of the players, but there’s a lot of power in the game, and that’s changed the strategies of the game to some degree, compared to what some of us oldies played in the early days. Like now, you cannot play a defensive shot, because the ball bounces high as a rule, and the players can move in and just hit it away with their pace. But in the earlier days, maybe you mis-hit a ball and it would go over the net low; especially on the grass courts, it wouldn’t bounce too high, so you’d get a lot more variation in some of the points. But all those things have changed with the hard court surfaces that are pretty much the dominant surface.

Does it sadden you a bit that Australia has slipped so far down the ladder in world tennis?

It does, because tennis has been such a great sport of Australia. And Australians have a great reputation for the record that was created over the years with Davis Cup and winning major events. But those days might never come back because there’s so many good players coming from all over the world. Which is only good for the game.