The race to the 2015 grand final is hotting up!

With week one of the finals done and dusted, we are down to the final six. As the Melbourne Storm and the Brisbane Broncos get the luxury off having the week off, four teams will battle it out in week two of sudden-death rugby league, where the winners march on to a grand final qualifier, while it's season over for the losers.

For the second straight year the Sydney Roosters were humbled in week one of the finals, this time by the Melbourne Storm. They now have been thrust into a sudden death showdown with fierce rivals the Bulldogs.

Des Hasler's side managed to survive a nailbiting golden point victory over the Dragons in week one and will need to significantly improve to have any chance of beating a determined Roosters outfit minus Mitchell Pearce.

The Roosters have had the edge over the Bulldogs this year, coming up trumps in round 10 and 21, but with a forward pack featuring the likes of James Graham, Frank Protchard, Sam Kasiano and David Klemmer, the Bulldogs will try to out-muscle the Roosters and charge towards a preliminary final showdown with the Broncos.

Johnathan Thurston's quest to deliver North Queensland its first NRL premiership is again one game away from crumbling for the third consecutive year, after a week one defeat to local rivals the Broncos. The Cowboys, who matched Brisbane in every facet of the game except the scoreboard last weekend, will go into this game full of confidence in front of an expected sell out crowd in Townsville.

However, they are coming up against a red-hot Cronulla side fresh off ousting reigning premiers South Sydney. The Sharks were faultless against the Rabbitohs, with inspirational skipper Paul Gallen and excitement machines Jackson Bird and Valentine Holmes leading the way. The Sharkies will need to reproduce the same effort to have any chance of sending JT and the Cowboys out of the finals.

The Sharks go into this contest as the only team to beat the Cowboys twice this season, which could give them a psychological advantage over the locals. Nonetheless, JT and his charges will be ready and primed for the boys from The Shire. A trip to Melbourne for a date with the Storm in the preliminary final awaits the winner of this one.

Check out the gallery above for all the key players and to see what happened the last time these four sides went to war! 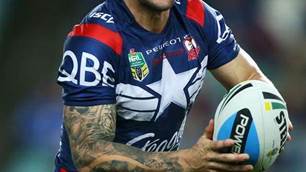