Gorgui Deng has filled in admirably for the injured Karl Anthony Towns. The much maligned Senegalese has put up 12.5 points, 7.1 boards, 2.6 assists and a block per night in 2020. Impressively, he's also hit 44% of the 4 three pointers he's attempting per game.

That being said, KAT's return can't come soon enough. After a nice 3 wins from 4 streak, the Wolves have dropped 3 straight. Their next 3 games: Indiana, Toronto and Denver.

Andrew Wiggins is back, which is nice. He's also back to normal, which is not. Wiggins has close to a 1:1 assists to turnover ratio and is shooting under 28% from the arc since his return.

The Suns did the unthinkable – losing to the Atlanta Hawks. That's a shame, because the Suns have a 5-5 record in their last 10. Much of that comes down to the stellar play of Devin Booker, who has averaged 32.9 points and 6.4 assists over his last 10 games. Kelly Oubre has been the sidekick that the Suns have been looking for, putting up 20.2 points and 7.9 boards through that stretch. Oubre's $15 million per year contract is an absolute bargain. If DeAndre Ayton develops as hoped, the Suns will at least have their core.

So much for last week's prediction!

Kyrie Irving returned for the Nets this week, with as easy a reintroduction as you could ask: Atlanta without Trae Young. Kyrie hung an effortless 21 on the Hawks and followed it up with 32 in the loss to the streaking Utah Jazz. He ran into a Josh Richardson shaped wall against the Sixers, scoring 14 points on 6 of 21 shooting. Irving fell back into his worst habits in this game, with needless over dribbling. He danced, but Richardson – and on occasion Ben Simmons – matched him step for step.

After a 2-8 run, the Blazers have steadied with wins at home to Charlotte and an impressive victory in Houston. Damian Lillard has been the one shining light – again – for Portland this season. Dame is posting his customary scoring numbers (26.8 per game) with his usual excellent deep shooting (3.4 treys at 36%). He's also averaging a career high 7.6 assists a night this season. He's found a chemistry with Carmelo Anthony that is encouraging.

Now if only the Blazers could play defense......

With their win over Houston, the Grizzlies have pushed their win streak up to 6 games. And guess what? They're in the playoffs as things stand. Who'd have thought that after a 2-7 start, with a young team and a rookie head coach, that the Grizz would be playoff contenders.

Their young core of Ja Morant, Jaren Jackson Jr and Dillon Brooks are cooking – all averaging over 18 points a game through the win streak. Keeping this core together, along with Jonas Valanciunas could lead to a fun few years in Memphis. 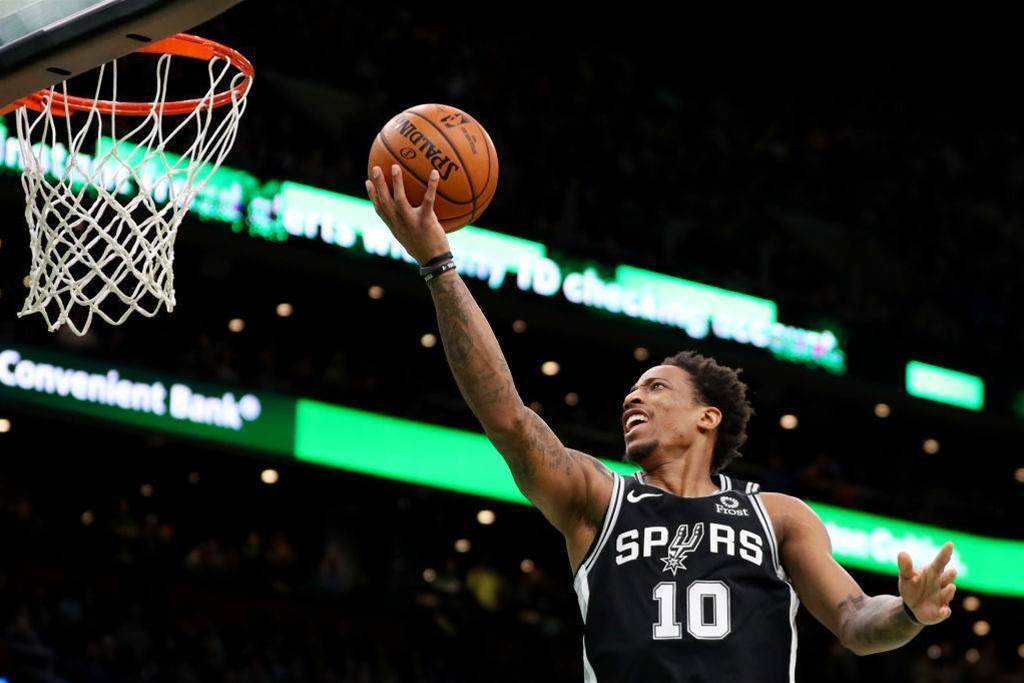 What black magic is this?

Coach Gregg Popvich has turned ageing, stuck in his lane LaMarcus Aldridge into the Texan Splash Mountain. LMA is attempting 5.7 three pointers per game in 2020. He's making 50% of them, which will of course regress. But it's the volume that is vital, here. Aldridge drawing his man away from the rim has opened up the lane for DeMar DeRozan. The mid range maven has lit it up since the turn of the year, posting 29 points per game on a ridiculous 71.3% true shooting. Those driving lanes allowed DeRozan to take Chris Boucher's soul when the Spurs visited his old Toronto stomping ground.

Keep an eye in that clip on OG Anunoby and his late rotation – that doesn't happen if Aldridge is parked 18 feet out, rather than 22.

The Magic blew a very winnable game in Phoenix to start the week, surrendering a 4 point lead with under a minute to play. They followed up with a couple of clutch performances in beating the Kings (yeah, ok) and the Lakers (OK!).

The catalyst for the Lakers win was one Markelle N'Gai Fultz. The 3rd year reclamation project recorded his 2nd career triple double (22/11/10) and simply took over this one in crunch time. His late buckets – including one over LeBron James – steered his team to a famous victory.

Save the date, Pacers fans. January 29th is when your man Victor Oladipo will make his long awaited return, 1 year and 4 days since rupturing his quad tendon.

The Pacers also welcomed back Malcolm Brogdon this week. His partnership with Dipo will potentially make or break the Pacers season. They've outperformed expectations with their star man out, and whilst his return should improve the team on paper, basketball isn't played in a vacuum. The first few games will be a feeling out process, but by mid to late February we should see how Oladipo has settled in.

The Thunder continue to confound those that thought they would crater & sell the farm. To be fair, that second part might still happen.

OKC welcomed back their former hero Russell Westbrook with a rousing video tribute. The fun continued for the Thunder faithful as they watched their team destroy the Rockets. In a poetic moment, Chris Paul put the icing on the cake with a gorgeous nutmeg on Isaiah Hartenstein.

That's 9 straight games missed by Kristaps Porzingis, now. Given his scary injury history, let's hope that this is a case of the Mavs wrapping their man in cotton wool.

Dallas has put together a 3 game win streak to recover to 5-4 in the big Latvian's absence. Their defense – never stellar – has cratered to 23rd in the NBA over this stretch. As good as Luka Doncic is, he can't do it all on his own and the frustration is starting to show.