Phil Salt and Wes Agar starred for Adelaide as the Strikers easily negotiated a trip out west.

Needing to win to keep pace with Sydney Sixers, the Strikers produced an accomplished performance to regain second place in the standings. For the Scorchers, a win would have secured a finals place, but they were outplayed at Optus Stadium. Liam Livingstone was in tremendous form with the bat but needed a partner to accompany him.

Jake Weatherald and Phil Salt got the Strikers off to a blistering start, but it could have been different if Ashton Agar could have held onto a catch in the first over. Salt did not look back as Jhye Richardson and Chris Jordan were hit to all parts by some impressive strokes. When the Scorchers did make the breakthrough, to remove Weatherald, the score rate was over ten runs per over.

Phil Salt continued his onslaught before a poor piece of cricket led to his dismissal. Josh Inglis executed the stumping, with Salt left stranded, to remove the dangerous batter for 59 from 31 balls. Alex Carey joined Travis Head at the wicket and continued in Salt’s vein while Head was happy to rotate the strike. Carey departed with the score on 139 in the fifteenth over, but that brought no respite for the Scorchers. Head started to score more earnestly while Jonathan Wells came in and did his thing that he’s done so well in BBL09.

Although Head then Rashid Khan fell in the final over, the Strikers reached 7/165. The Scorchers limited the number of boundaries in the last few overs to restrict a score that could have been in the region of 180. Matthew Kelly’s 2-26 was the best of the home team’s bowlers.

The Scorchers’ response started sedately before Livingstone found his range in the second over and planted Michael Neser into the second tier of the stands. Josh Inglis fell for five, but it was the arrival of Kurtis Patterson that signalled some impressive hitting. Whether it was the pace of Billy Stanlake or the spin of Travis Head, Livingstone looked for big hits. 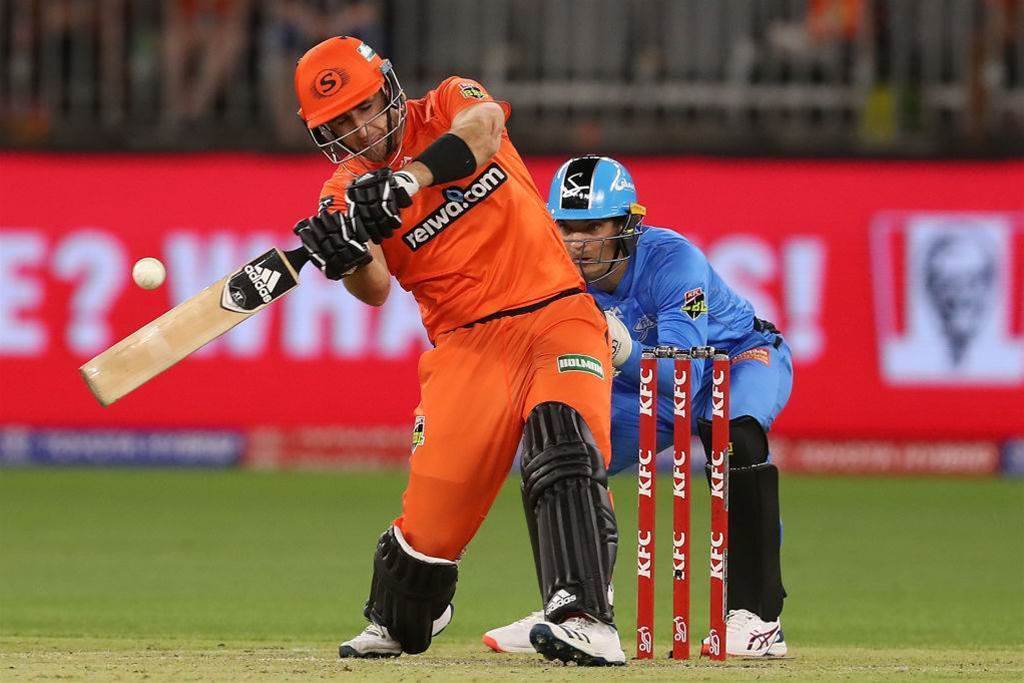 Patterson fell for 17, to Stanlake, but it was the wicket of Mitchell Marsh that saw the Scorchers under pressure. With the captain back out for four runs, Ashton Turner soon fell too as the Strikers started to pile pressure on. Livingstone was the key man for Scorchers and passed his fifty off 37 balls. Cameron Bancroft was an ideal foil to Livingstone’s aggressive intent, but a mistimed pull effectively ended the home team’s chances of chasing the total down.

The impressive Wes Agar made the breakthrough, to claim his third wicket of the match, and the Scorchers were floundering on 5/115 with less than five overs left. Wes’s brother Ashton scored ten not out, and Richardson smashed 16 from four balls, but the Strikers were home and dry. Perth finished 16 runs short but was flattered by the Richardson’s hitting in the final over.

“We were probably 15 to 20 short for most of the chase really, I thought Liam did a terrific job, and I think he’s learnt how to play the pitch and that has been pleasing to see, it’s just a shame someone couldn’t go with him tonight,” Voges said.

The effect on the finals positions is that Adelaide is in second place with a superior net run rate over Sydney Sixers. For that to change, Sixers need to beat Melbourne Renegades in their last match and either hope that the Strikers then lose to the Hurricanes at home or beat the Renegades so convincingly that there’s a positive shift in their net run rate of over 0.42.

Perth needs to win their last match against Sydney Thunder to guarantee a finals place. If they lose, the Thunder are through, and Scorchers are exposed to Hobart or Brisbane finishing higher. Brisbane have two matches left so if they win both, and it’s a big ‘if’ based on their recent performances, they could finish as high as fourth place.