Spinner Chris Green will serve a mandatory 90-day suspension which will rule him out of the rest of BBL09.

Green travelled to Brisbane and was tested at the Bupa National Cricket Centre on Sunday by Dr Luke Kelly. Kelly is the Biomechanics consultant to Cricket Australia and reported his findings from the testing.

The results found that Green had an illegal bowling action, with his arm flexing more than the permitted range, and the test findings were released to player and team today (Wednesday).

The suspension is effective immediately which leaves Green unable to play any further part in the tournament as a bowler.

The suspension prevents Green from bowling in any Cricket Australia-run competitions but could, theoretically, play as a batter. He can play Premier Cricket under the supervision of Cricket NSW during the suspension.

Peter Roach, Cricket Australia’s Head of Cricket Operations, said, “We’d like to commend Chris and the Thunder for the way they have approached this process with complete cooperation and respect.

“Chris undertook testing at the earliest possible time and satisfactorily replicated his bowling action in the controlled environment.

“We look forward to working with Chris in the coming months and conducting further testing once the suspension period has elapsed.”

It is unfortunate for both Green and the Thunder who contracted recently for a record-breaking six-year deal. Green has three BBL wickets this season at 45.33 with an economy rate of 7.55. He is an experienced player who will be missed by Thunder.

Coach Shane Bond was quick to offer support for his bowler: “Chris is a crowd favourite, and he’s also an extremely popular member of our club.

“Sydney Thunder signed Chris to a long-term deal with the club because of his leadership qualities and obvious talent. He’s an important part of our future, and the club will support him through this process.”

The timing of the suspension is particularly frustrating as Green was being mentioned for a possible white-ball call-up for Australia. With the T20 World Cup less than ten months away, the spinner could have made his way into the squad.

Also, Green was selected in the recent IPL auction when Kolkata Knight Riders picked him up for $41,000. The suspension will not affect any IPL appearances because the suspension has come from Cricket Australia.

When the 90-day suspension period ends, Green will have to go through another period of testing to demonstrate that his action has been rectified and meets the requirements of a correct bowling action.

Green has much work to do over the next few weeks to understand and modify his bowling action if he is to get clearance. 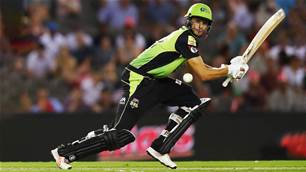 Green: I'll poke the bear every now and then...