Hobart Hurricanes kept themselves in the frame for the finals with a comprehensive victory against Sydney Thunder.

D’Arcy Short was the star for Hobart with his maiden T20 fiver-for. Although the opener failed with the bat, with a two-ball duck, but more than made up with the ball by turning in 5-21. Thunder lost eight wickets for 28 runs to give the Hurricanes a massive net run rate boost.

Hobart’s innings was boosted again with a superb partnership between Matthew Wade and Macalister Wright. The pair added 97 runs, after sharing an 84-run partnership last game, to set up the Hurricanes for a competitive total. David Miller and Ben McDermott accompanied Wright as he added his second consecutive half-century before falling in the 17th over for 64.

George Bailey, playing in his last game at Blundstone Arena before retiring, added a quickfire 29 from ten balls to push the Hurricanes on. The crowd were appreciative of Bailey and gave him a resounding response when falling to Daniel Sams.  It was Sams’ fourth wicket of the match as the Thunder bowler extended his leading wicket-taker tally to 24 wickets. It was the bowler’s best bowling performance of BBL09 while his colleagues, apart from Arjun Nair, failed to back Sams up. At the end of their innings, Hobart posted 6/185.

Sydney Thunder’s top four batters were key to chasing down the total. Usman Khawaja, Alex Hales, Callum Ferguson and Alex Ross were the wickets that Hobart wanted, and Khawaja was soon on his way. With the score on 20, Khawaja flicked at a ball off his legs and found Scott Boland at deep backward square. At the other end, Hales was going well and kept the scoreboard ticking over. Captain Callum Ferguson was in dire need to runs for personal reasons as much as for his team. Having hit a six, Ferguson tried to repeat the stroke but mishit the ball for James Faulkner to take a tumbling catch. The score was 2/66, but the Thunder were keeping up with the required run rate.

Hales soon past his fifty, from 29 balls, and was critical to the Thunder’s success. Alongside Alex Ross, Hales moved the scoreboard to 100 before disaster struck. Trying to target D’Arcy Short, Hales was deceived by a delivery and could only top edge the ball. It was a rash stroke for the opener but turned out to be a decisive blow for the Hurricanes. 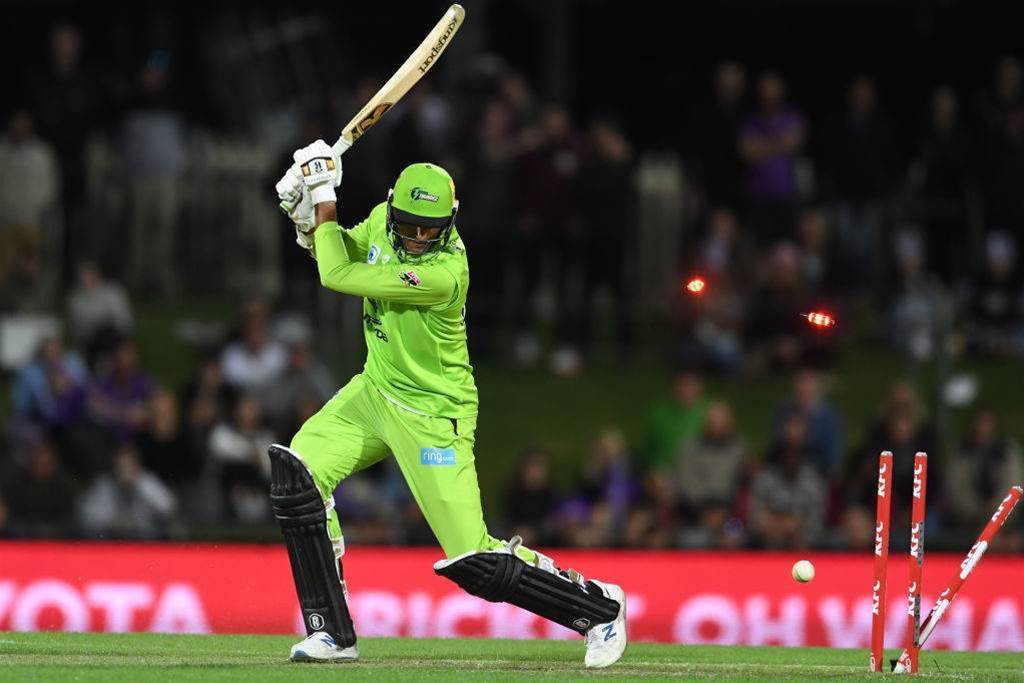 Short picked up his second wicket in the over when Chris Miller proved again that he was unable to read leg-spin. Jay Lenton became Short’s third victim, in his next over, when Wright took an excellent diving catch. Boland removed Sams in the next over before Short provided the coup de grace by luring Ross into an expansive shot for David Miller to take the catch.

Short collected his fifth wicket three balls later before Nathan Ellis, and Wright’s lightning fielding ended the contest. The winning margin was 57 runs, but the real bonus was the effect on the Hurricanes’ net run rate. Thunder was replaced in fifth place by the Hurricanes as the race for the finals hots up.

Both teams play on Sunday, and both need to win to be in with a chance of the finals. Thunder have a home game against the Perth Scorchers while the Hurricanes have a tough encounter at the Adelaide Oval. Two from Scorchers, Hurricanes, Thunder and Heat will make the finals.