The annual Southern 80 blasts an energy into Echuca not seen here since ale houses and bordellos ruled.

The annual Southern 80 blasts an energy into Echuca not seen here since ale houses and bordellos ruled. 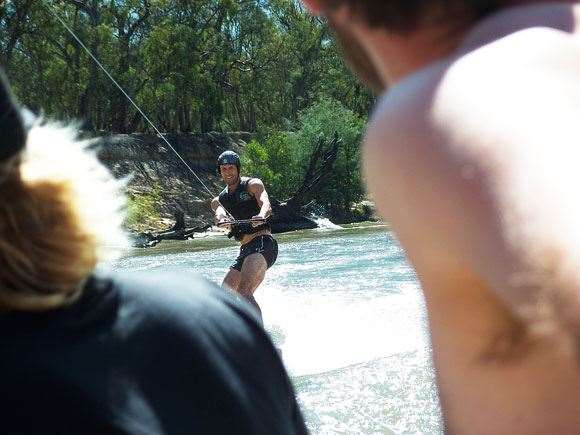 “Lean back and let the boat do the work” is easier than it sounds.
Images: Sarah Morton, NSW Tourism

Back in the days when Queen Victoria was still a comely young thing, Echuca was the biggest, loudest, wildest river port in Australia. Neatly positioned where ol’ man Murray dips closest to Melbourne, the place fizzed with industrious energy as fleets of low-slung paddle steamers, their decks sagging beneath bales of wool and wheat, converged on the town’s 300m-long red gum wharf. And, like any good port town, the place also fizzed with a seamier energy. It was estimated there were over 100 pubs in town, and no one even bothered to guess how many illegal gambling houses and bordellos were crammed into the warren of sandstone tunnels that branched from the cellars of the pubs like a sordid ants nest. Yes sir, back in those sepia days, Echuca hummed.

And then the railway was built from Junee to Hay and the fledgling economy stumbled and Echuca shrivelled like a dying spider. The banks locked their doors and the paddle steamers dropped anchor. As the industry went, so did the fun. The pubs boarded their windows and the tunnels were abandoned. No doubt an army of pallid prostitutes and croupiers emerged blinking into the sun before scuttling off to the next boom town.

But something of that raffish air remains in Echuca, and its outlet isn’t drunkenness, card playing or whoring (although, no doubt a dash of those three remains). These days the outlet involves strapping yourself to a metre-and-a-half plank of wood and hurtling down the river behind boats that look like bullets and carry engines the size of kitchen fridges. Dare we suggest it makes a spot of illegal howdy-do in a dank tunnel look positively boring? At least that’s what Echuca local and three-time barefoot waterskiing world champ Brett Sands is out to prove when he hauls me behind his 450-horsepower missile (although, in fairness, Sands provided no tunnel hanky-panky for the purposes of comparison) …

If you read the papers, with all their sombre eulogising of the Murray-Darling Basin, you could be excused for thinking the Murray is no more than a straggle of fetid puddles steaming hopelessly beneath the burning sun. Around Echuca, at least, nothing could be further from the truth. Here, the river keeps on rolling, wide and brown, glistening happily in the relentless summer glare. And this is a good thing for those with speedboats and wakeboards because this tract of river is wakeboarding nirvana. With its curlicued line, steep banks and bracketing forests of eucalypts, the river’s sinuously challenging, while the water’s smooth as honey. No matter which direction the wind whistles, no matter how hard it blows, you can always scout out a clean stretch of water around Echuca.