Quick analysis of Wallabies and their group opposition.

The Wallabies will he aiming to be the first nation to win three World Cups, after their successes in 1991 and 1999. That dream hit a speed bump after Michael Cheika's men were drawn into the "pool of death" (something that's becoming an Australian sporting tradition). Even though the pool seems the most difficult out of the four, fans should be confident in the Wallabies, who rarely fail to produce a rough, strong and entertaining brand of rugby. The Australian scrum has improved heavily since Cheika's appointment, and their forward pack is now able to ruck and maul with some of the best in the world.

One major issue, though, heading into the 2015 edition of the Cup, is the Wallabies' halves debacle. Aussie fans have seen different combinations throughout the Rugby Championship and the Bledisloe Cup. Some worked to avail and some failed miserably, each pairing having trouble in trying to break opposition defensive lines on a consistent basis.

The host nation will be hoping to repeat the brave efforts of their triumph in 2003. A cup squad that is usually packed with veterans and experience, the 2015 team is a lot different compared to squads of the past, with only two players 30 years or older. With their strengths lying in their powerful forwards, questions have been raised concerning their back-line. Their performance in the Six Nations proved that, like the front-half, the back-half is certainly capable of running the show, but with only a handful of caps shared between the centres, it'll be interesting to see if the English will be able to withhold the pressures of being the host-nation.

Has the cup dream ended before it has begun for the Welsh? They certainly hope not, but high spirits dampened heading into tournament as star player Leigh Halfpenny was ruled out of the Cup due to a knee injury, adding to the absence of scrum-half Rhys Webb. And it's gone from bad to worse for the Welsh after Halfpenny's injury replacement, Eli Walker, had to pull out due to a hamstring injury. But as bad as it may seem for Wales, the team still has the fire to surprise many. The core of this squad was part of that young team that reached the semi-finals four years earlier and many of those players represented the British and Irish Lions during the successful tour of Australia in 2013. There is still no valid reason to rule out the Welsh.

Their chances of progression may seem slim, but Fiji are no easy-beats. With a team glittered with a lot of experience all around the park, many are tipping the Fijians to knock off one of the three heavyweights in pool A. With a fast-paced backline, the Fijians will surely be an entertaining team to watch in the Cup.

One of the minnows of the 2015 Cup, Uruguay will be readying to front their third World Cup campaign. After easily beating Brazil then Chile, Uruguay came close to causing a momentous upset against the USA, but lost out the chance for direct qualification. They managed to squeeze past Russia in a final playoff and booked their flights for London. 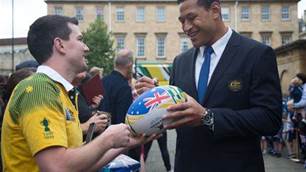