Both Sydney Sixers and Brisbane Heat won on Saturday as the race for the finals is heating up.

The Sixers were in impressive form despite heroics from the Renegades captain, Aaron Finch. At the MCG, Brisbane Heat’s massively fluctuating BBL09 campaign continued with a resounding victory over the Melbourne Stars. AB de Villiers rolled back the years with bat and keeping gloves as the Heat boosted their chances of finals cricket. 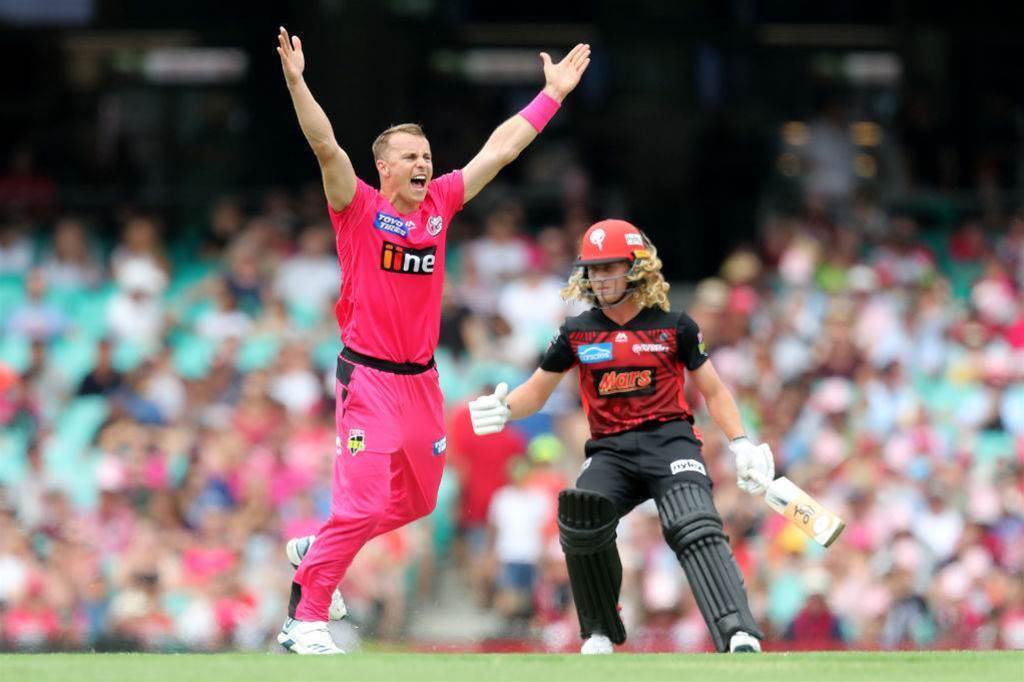 Aaron Finch finally converted a big score to produce the BBL’s third century of the season. The Renegades captain had shown his form in the recent ODI series in India, and his 109 helped his team to 175. Opening the batting with Tom Cooper, it was the junior partner who did most of the scoring until Tom Curran got the breakthrough for the Sixers. Cooper’s 24 from ten balls took the Renegades to 39 in the fourth over.

The loss of Cooper saw Finch take over the scoring intent while Nathan McSweeney and Beau Webster failed to find the boundary. McSweeney became Curran’s second wicket, trapped in front for 11, while Steve O’Keefe had Webster stumped for seven.

Mohammed Nabi provided more support for Finch, who was in an irresistible mood. Josh Hazlewood struggled to get a breakthrough and conceded 43 from his four overs. When Nabi did fall in the 19th over for 20, from 13 balls, the Renegades had progressed to 4/161. Finch was finally out on the penultimate ball, Curran taking the catch on the long-on boundary off the bowling of Ben Dwarshuis before the Renegades’ innings finished on 5/175.

The Sixers entered the match knowing that a win was paramount if they were to aspire to finish second. Josh Philippe was joined by James Vince to open, both having expressed enjoyment in batting together, and the partnership started brightly. Having taken 13 off the first over, from Samit Patel, and 18 from a Dan Christian over it took a piece of good fortune to get the breakthrough.

Philippe smashed a Will Sutherland delivery straight back down the wicket, and the bowler couldn’t take the return catch. However, the ball cannoned off Sutherland’s wrist and onto the stumps where Vince was out of his ground and left stranded. It was an unfortunate moment for the Sixers, but it brought Steve Smith to the crease.

Philippe continued playing his shots, and the Renegades failed to take their chances. In Cameron Boyce’s first over, Dan Christian then McSweeney put down catches to remove Philippe. Boyce’s next over compounded the drops as Philippe took 15 runs from it. Sutherland finally removed the opener, for 61 from 42 balls, before Nabi for the wicket of Moises Henriques in the next over.

From that point, Smith took over and demonstrated a textbook run chase. Putting pressure on bowlers by finding the gaps, hitting bad balls for boundaries and accelerating towards the target was Smith’s modus operandi. Daniel Hughes hit the winning runs, but Smith took the plaudits. In their partnership of 73, Hughes contributed 19 as Smith showed that the Sixers are going into the finals in form. 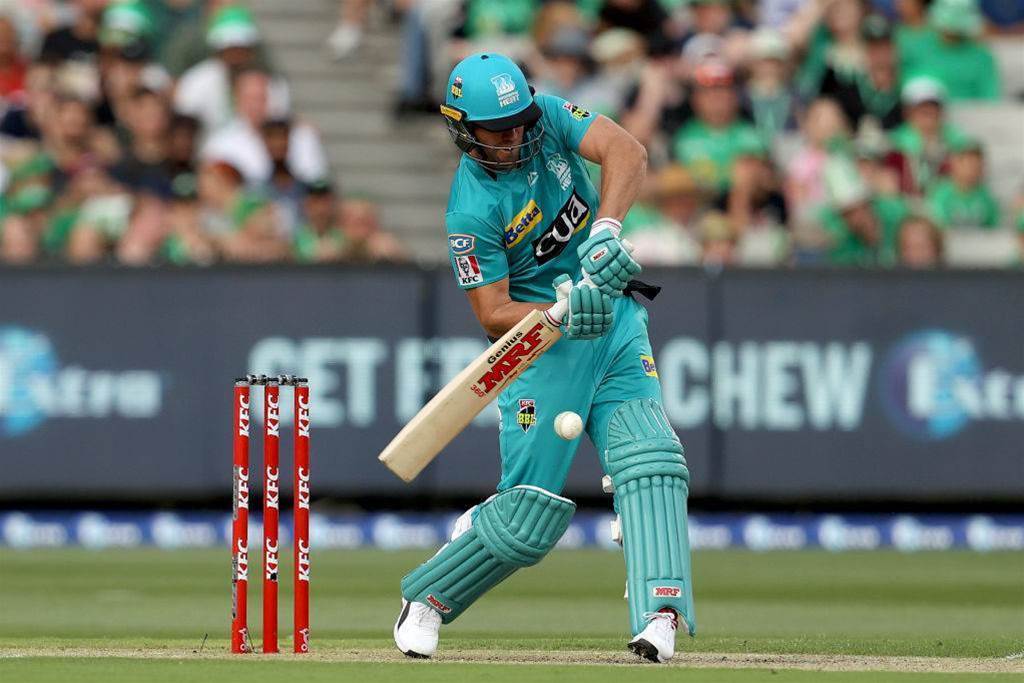 At the MCG, the Stars and Heat met with the Brisbane side looking for a morale-boosting victory. They decided to drop wicketkeeper Jimmy Peirson and give AB de Villiers the gloves. Also, Brisbane changed their batting order around with Ben Cutting asked to open with Sam Heazlett. For the Stars, Dilbar Hussain made his debut as a replacement for his countryman Haris Rauf who was on international duty.

It was not a great start for the Pakistan bowler as he conceded 12 from this opening over. Zampa bowled the second over, with Heazlett helped himself to two more boundaries, and fizzed one through the young opener to bowl him. Cutting then picked up the mantle and crashed Nathan Coulter-Nile for three successive boundaries as the Heat made an impressive start.

Cutting and new batter Chris Lynn were scoring well off pace, so Stars captain Glenn Maxwell decided to bowl leg-spin at both ends with Sandeep Lamicchane joining Zampa. The runs started to dry up, and Cutting fell trying to hit Zampa down the ground, and the Heat were 2/58 from 7.4 overs.

AB de Villiers joined Lynn at the crease, creating a match made in heaven for neutral cricket fans, but scoring proved to be tough. Lynn struck a four and a six to release the Stars’ grip before perishing to Lamicchane. Maxwell brought himself onto bowl, and gave the ball to Clint Hinchliffe, as the ‘pace off’ approach continued.

At the end of the 14th over, Heat were 3/98, and de Villiers decided that this was the point to launch the innings. Hinchliffe was despatched for 18 before Renshaw fell adopting a similar attacking mindset. However, de Villiers continued his rampage while being aided by Marnus Labuschagne. Maxwell disappeared for 19 while Hussain’s last over conceded 22. The last ball saw de Villiers lose his wicket, but the damage had been done. His 71 from 37 balls consisted of six sixes and two fours to propel the Heat to 5/186. Stars haemorrhaged 88 runs from the last six overs and were faced with a tricky run chase.

Matt Renshaw bowled the first over and saw it disappear for 16 as Marcus Stoinis took full advantage. James Pattinson bowled the second over at that went for 12 runs as the Stars approached their target with intent. Mujeeb’s first over was much tighter as Heat looked to regain the initiative. Pattinson’s next did that as he removed danger man Stoinis and Seb Gotch.

Heat decided to employ similar bowling tactics with Mujeeb and Swepson in tandem. It was Swepson’s second over where the momentum moved significantly. Off the first ball, Handscomb took on a suicidal second run, and Mujeeb’s clean throw was efficiently dealt with by de Villiers to affect the runout. The fourth ball proved to be monumental when Maxwell was beaten by a quicker ball, perhaps staying a bit lower than expected, and was bowled for one run. The Stars were in a spot of bother.

Continuing with spin at both ends, Swepson and Mujeeb took wickets in four successive overs as the Stars were imploding. Ben Laughlin came back into the attack, and he too claimed a wicket as the Stars were 9/95 and heading for a heavy defeat. Jack Prestwidge mopped up the final wicket to bowl the leaders out for 115 as the Heat claimed a 71-run victory.

There are three matches left: Thunder vs Scorchers (Sunday), Strikers vs Hurricanes (Sun night), Renegades v Heat (Mon). There are plenty of scenarios as the finals loom large: