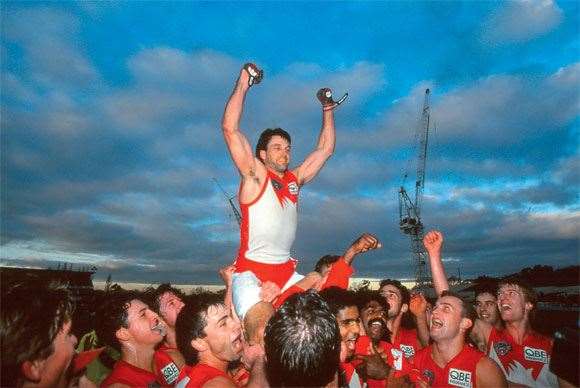 These are blustery times for the AFL. Beachheads in western Sydney and on the Gold Coast, Israel Folau and Karmichael Hunt jumping codes for untold money, established AFL stars bitter at these unprecedented contracts, old clubs terrified at the concessions granted these newcomers. Fear, loathing, greed and optimism in the AFL – these are things Paul Roos has seen before.

He’s lived the game in the suburban heartlands – 269 appearances for Fitzroy attest to that. And he’s lived the game on the barren frontier – 87 games for the Swans and eight years as head coach in Sydney attest to that. He’s experienced years of plenty and years of famine. As a player he’s finished at the foot of the table and he’s lost a grand final, as a coach he’s won a grand final and lost another. And at the end of this season, he’ll hand in his clipboard – leaving the AFL a poorer place. So while Roos is still here, pull it in tight and bend an ear to one of the most considered and articulate voices in footbal

Perhaps a little premature, but congratulations on a fine stint at Sydney. Will you look back on your Swans years with fondness?

I will – when this season finishes. When I get a chance to reflect on things, I think I’ll see that what we’ve been able to achieve here has been a really special time in the club’s history.

You’ve always said you’re “not a career coach”. Why?

Well, as a player I always found it hard when a coach had been with the same group for a long time. I’ve always felt there was a lifespan for a coach at one club, and I’ve always seen myself as a one-club coach – so the only outcome when you put those two things together is that I won’t coach for 15 years. Not everyone’s Kevin Sheedy – he was extraordinary in his ability to reinvent himself with a group of players, to outlast one generation and take on another. That’s very, very rare for a coach; Kevin had a unique talent. I always thought seven to eight years was a good period for me, after that I might get tired, the players might get tired of me. As it’s turned out, this year’s been my eighth …