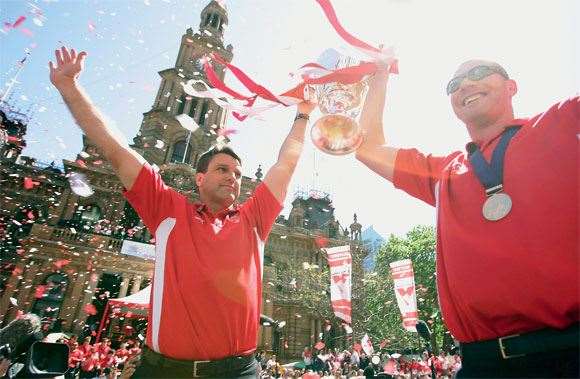 Roos with Barry Hall – no Plugger, but equal in value in the spirit stake
Image: Getty Images

With Greater Western Sydney setting up shop across town, do you worry this is a bad time to leave the Swans?

Look, hopefully the club sees a role for me in the future. I certainly don’t want to be seen to be abandoning the club. While I’m not senior coach, my allegiance is very much with this club. So I’ll definitely be discussing some sort of role with our CEO Andrew Ireland because I do think it’s a very important time for this footy club.

I think it’ll work because the AFL’s saying it’ll work. They’ll pump millions and millions and millions of dollars into this. But what does work mean? You know, we’ve been here for 29 years and we won the flag in ’05. But how do you define success? When is a club deemed as successful? That’s the main question.Look at the Swans. We’ve had two runs of success. There was the Edelsten era, back in ’86 and ‘87, when they bought some good players. But the real foundation of this club came when it was restructured, when the AFL mutually took the club back from the private owners and made it a membership-based club. Then, of course, Tony Lockett came up and that was another turning point. To get Plugger up here – that generated enormous interest which only grew with that grand final appearance in ‘96. I think that was the moment the Swans really arrived. And that period carried through to the flag in ‘05. So we had that period of success from ‘86 through to ‘88, but in a real sense the success didn’t arrive till Tony Lockett got here.

So it took Sydney 15 years to establish itself. Is this the sort of time frame GWS should be looking at?

I think so. And listening to Andrew Demetriou and David Holmes and those guys, I think they realise that this will have to be a generational thing. It’s not going to happen in four or five years. That’s not saying the club won’t win games. But in terms of being accepted and being well-known in the community, in terms of becoming a stand-alone entity, not reliant on AFL money, that’s going to take a lot of time. You’re looking at 10, 15, maybe even 20 years.

Is a team in western Sydney necessary?

Well, it’d be interesting to ask a lot of people around Sydney and New South Wales. But the AFL has deemed it necessary based on where the competition’s going, TV rights, things like that. So it’s probably not for me to say whether it’s necessary. But you can certainly take a view, being here in Sydney, that the Swans are still building as a brand ...