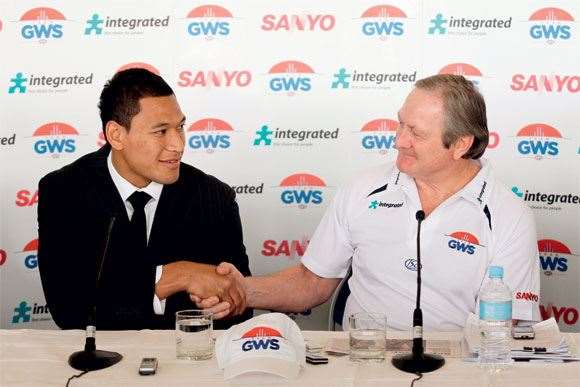 Israel Folau’s skills in pulling a crowd is what Sheedy’s GWS paid for.
Image: Getty Images

Getting into the technical nitty gritty, how would you go about developing them into AFL footballers?

Well, we had Mike Pyke, so I’ll use him as an example. The first thing we did with him was look at a tape of him playing. And, yeah, we saw his raw athleticism, saw him scoring that try against the All Blacks, so we made a few enquiries and discovered that, yes, he had kicked the ball a bit. That’s when we brought him over here.

The first thing we did then was test him. How good was his kicking? Not too bad, we could work on that. He was six foot seven, so we knew he was going to be a ruckman. After that we thought we’d better see how he could run. So we put him on a three-kay time trial. And to be perfectly frank, if he’d run 13 minutes, we wouldn’t have brought him back. So to answer your question, if they can’t run, their chances of playing AFL football are zero. If they can’t get fit, it doesn’t matter how good a mark they are. That’s stage one. After that you work on their pure skills – stationary kicking, basic handballing, building it up, as often as you can, repetitive, repetitive, repetitive. Only then do you translate that into a game. And even then a lot of the stuff they’re only going to learn from playing.

You mention that 360-degree scope of AFL – surely that alone would take thousands of hours of game time to become adjusted to?

Well, that’s where you need to know what other sports they’ve played. If you’ve purely played rugby league since you were 11, then yes, it would be very difficult. But with Pikey, for example, he’d been a very good basketballer in his younger days, and that’s a 360-degree game that demands good decision-making. There’re a lot of very good basketballers playing AFL footy.

Look, we’ve seen Pikey build up to a very good level of football, but as a ruckman he’s only getting the ball seven to eight times a game. Hunt and Folau aren’t going to be ruckmen. They’re going to be asked to use the ball a lot more, be a lot smarter in their decision-making.

Have you heard any grumbling from the Swans’ players about the money Hunt and Folau are on?

Clearly, if the numbers we’re hearing are correct, then the salaries are exorbitant for their talent levels. But the advantage the Swans’ players have is an understanding of what GWS is trying to achieve in terms of marketing. I think our players realise that if the contract is, say, a million dollars, maybe 200,000 is for playing and the

rest is for marketing. I haven’t asked the boys if they’re happy or unhappy with the numbers, but I think they do understand the reality of where the dollars are coming from and going to.