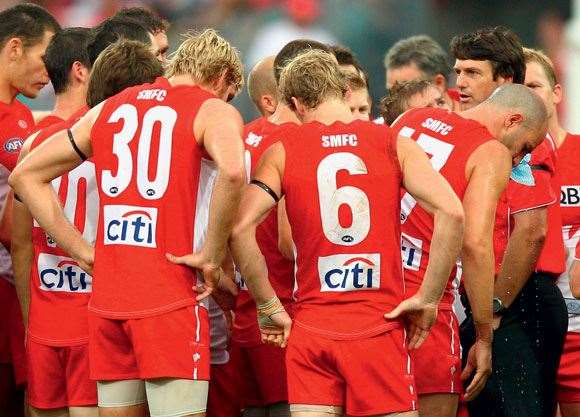 When Roos brings the Swans in close, his charges listen up – always have
Image: Getty Images

You don’t appear tired. And the players certainly don’t seem tired of you …

As a player you were coached by some big names – Barassi, Parkin, Wall, Eade. Any favourites?

I’ve enjoyed all of them to be honest. Personally, one of the most important things has been having a lot of coaches. They were all so different. Tactically, Rodney Eade was fascinating, how he used his players. Certainly Rodney and Robert Shaw were the most tactical coaches I played under. David Parkin was just so thorough in his preparation, so it was very instructive to watch him go about his business. Wallsy really changed the game with his kick-ins, so he had a very innovative mind. Not many coaches can say they actually changed the game, but Wallsy had the huddle going at centre half-back and then we’d kick wide – that’s why they brought in the zones. And then, of course, Barassi just had a great aura about him. Everything he said, you listened to – some of it was a bit left-field, but it was always interesting.

As a coach what do you see as your main strengths?

I think honesty. We’re very honest with our players here. They’re very comfortable coming to the coaching group – not necessarily to me, because I think the coach needs to maintain a certain aura – and I think we’ve set up a system where the players can have a real say in their footy club, from the oldest to the youngest. I think that empowerment, that ability to have a real impact on their club, is something they’ve enjoyed.

You’ve also spent time in America studying their sports. Learn anything there?

Yeah, I had a chance to go over there when I retired in ‘99 and I went to the Chicago Bulls, the Chicago Bears, the 49ers, the Denver Broncos. I was just struck by how professional they were, how specific their training was compared to what we were doing back here. It was real game-state training, game-related stuff, whereas back here it was just a bit of kick-to-kick and circle work. That was a big thing I brought back.