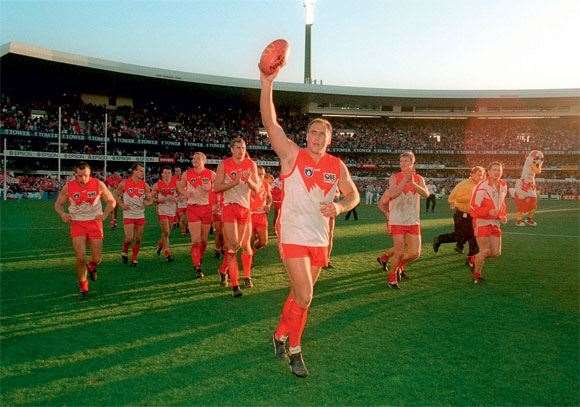 Tony Lockett is the one who really kicked off the Swans’ success.
Image: Getty Images

Let’s get to some of your memories. What’s the funniest thing you’ve seen on the paddock?

Ummm. Well, I actually kissed one of my good mates – Tony McGuinness – on the boundary line one day. I tackled him and we both rolled over the boundary line, and he started having a bit of a whinge, so I planted a kiss on his cheek.

Did he enjoy it?

Wouldn’t say he enjoyed it at the time …

At their peak: Hall or Lockett?

Oh, both have done enormously well for this club. No disrespect to Hally, but Lockett, with 1300 goals, is arguably the best player to ever play the game. I think Hally would happily acknowledge that. But you could definitely say that while Barry was here, his contribution was equal to Lockett’s, even though he never kicked his hundred goals. If you compare their legacies at this football club, I think they’d be comparable.

Your no dickheads policy – can you name any blokes who slipped through the net?

Well, it’s funny, I think our recruiting bloke chucked up the no dickheads policy. I sometimes joke that we take dickheads who are talented, we just don’t take untalented dickheads ...

Does it still hurt to see no Fitzroy in the comp?

Oh mate, I’m pretty realistic. I think what Brisbane’s done has been really good. I remember at Fitzroy back in ‘86 the club president at the time pulled us all together and said, “We’re broke, we’ve either got to merge with someone or go to Brisbane.” And the player group all voted to go to Brisbane so we could stay together. And that’s probably my only regret from my time at Fitzroy: I wished we’d gone at the end of ‘86, because I reckon we would’ve had a really successful period. There were some players drafted to Brisbane who probably would have gone, good players who never went. I always thought Brisbane was the best option. You know, if I ever live in Brisbane or Melbourne again, I’d take my boys to a Brisbane game and say, “Look, this is my old club.” I’ll always say that. I’ve got two clubs – one’s Sydney, the other’s the Brisbane Lions.